A major storm system will deliver severe weather and also some snow to much of the central United States.

As a major storm wraps up across the north-central United States, a swath of colder and drier air will sweep in as the week ends and the weekend begins, marking an end to record-challenging warmth that will have taken hold in the East and severe weather expected to rattle the Midwest and South.

The colder air will first arrive across the Midwest on Friday, squashing the severe threat in areas that have the potential to get hit hard on Thursday and Thursday evening. 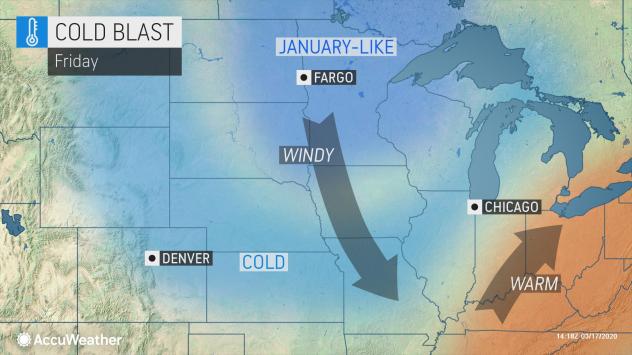 By Friday morning, the leading edge of the colder air and end of the severe weather risk is likely to extend from Ohio to western Tennessee and central Texas.

"South of this area, especially from the southern Appalachians to the lower part of the Mississippi Valley and Mississippi Delta region, as well as northeastern Texas, there will be the potential for heavy, gusty and perhaps severe thunderstorms on Friday," AccuWeather Meteorologist Jake Sojda said. 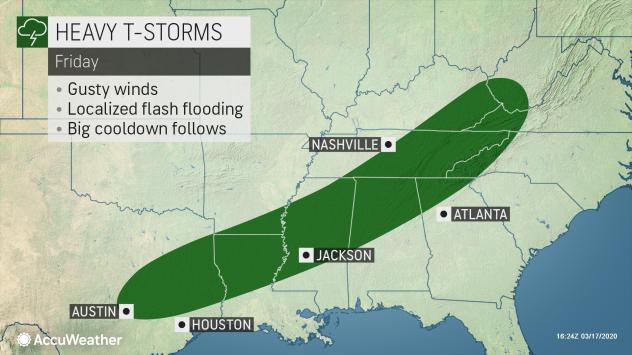 Friday's storms may be the surviving remnants of severe weather that is predicted to hammer the southern Plains to the mid-Mississippi Valley on Thursday evening.

"At the very least, there will be the potential for storms capable of causing flash flooding and strong wind gusts, which can hinder travel Friday," Sojda said.

Downpours, along with thunder, lightning and perhaps gusty winds can also extend ahead of the push of colder air over the central and northern Appalachians as well as parts of the mid-Atlantic and New England coasts by the late afternoon and evening. 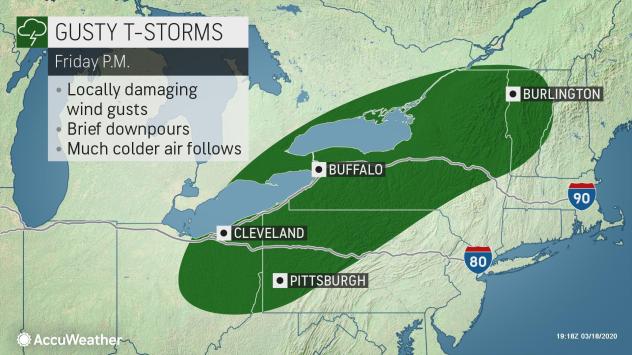 By the weekend, the press of cold air will reduce the risk of severe weather, even in the Deep South. 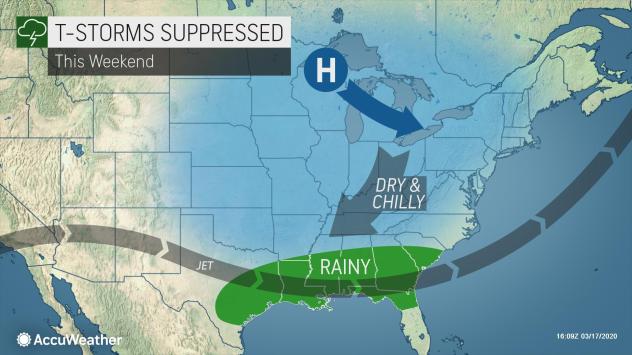 The push of cold air itself will be quite a shock after the surge of warmth from Wednesday to Friday.

Temperatures will be slashed by 20-50 degrees Fahrenheit from the peak of the warmth to the bottom of the chill in the coming days.

For example, in St. Louis, following a high in the lower 70s on Thursday with the potential for severe thunderstorms, temperatures will plunge during the day on Friday and wind up around 30 by Saturday morning.

Multi-day severe weather threat brewing for parts of central, southern US Spring to begin with a brief hot spell across the eastern US Winter's last hurrah: All-out blizzard to blast parts of north-central US Coronavirus can survive in the air for 3 hours, on surfaces for 2-3 days Coronavirus daily briefing: Americans shelter in homes as restrictions become the new normal

East of the Appalachians, the cooldown will be a bit more gradual and tempered somewhat by the nature of air flowing downhill from the Appalachians and warming up just a tad. 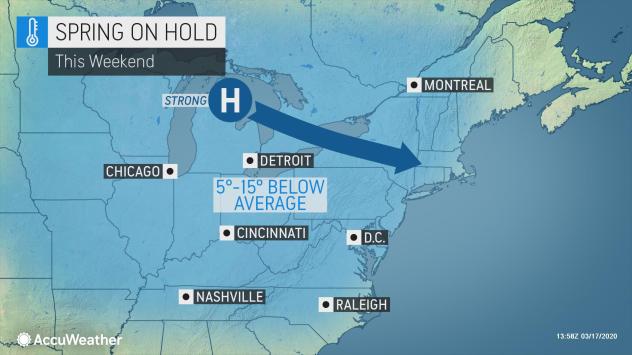 However, even in New York City, high temperatures in the middle 70s on Friday will be exchanged with a high near 50 on Saturday and then the middle 40s on Sunday.

People in New Orleans and Atlanta will also feel the change. Following highs in the middle 80s and the middle to upper 70s, respectively, on Friday, highs are projected to be around 10 degrees lower on Saturday.

Since the push of cold air is likely to stall along the Interstate 10 corridor this weekend, the area near the upper Gulf Coast is likely to remain wet and unsettled.

Downpours may repeat in this part of the Deep South to the point where there is the risk of flooding.