It was a stormy start to the first week of May, a month that is typically one of the most active of the year in terms of severe thunderstorms and tornadoes.

Monday’s twisters and damaging storms were a continuation from the weekend when tornadoes tracked across Mississippi, including one that prompted a rare tornado emergency for nearly 100,000 people.

By mid-morning on Monday, the tornado threat reached the Atlanta area with tornado warnings being issued around 10:30 a.m. EDT. AccuWeather National Reporter Kim Leoffler was in the area and witnessed suspected tornado damage first-hand in the wake of the severe storm.

Seeing lots of damage from a suspected tornado in South Fulton, GA near Atlanta. Workers at a warehouse here tell me they all took shelter in a bathroom when the storm came through. Everyone there is ok. @accuweather pic.twitter.com/zsOPgbSIeV

Around the same time, emergency responders received a call about a tree that fell on a vehicle in Douglasville, Georgia, located just west of Atlanta, in what would become the first storm-related fatality of the day.

“When firefighters arrived at the scene, they discovered the driver was trapped inside the vehicle with power lines and a tree on the vehicle,” Douglas County Communications Director Rick Martin said in a statement. “Firefighters had to extricate the driver who we are only identifying as a male at this time until next of kin are notified.”

Tornado-warned storms also tracked near Auburn, Alabama; Charlotte, North Carolina; and Lowndesville, South Carolina, but no reports of substantial damage or fatalities in the wake of these storms.

“Monday’s severe weather started off in the Southeast where rounds of severe weather rocked portions of Alabama, Georgia and South Carolina," AccuWeather Senior Meteorologist Carl Erickson said. "There were many reports of hail and damaging winds, mostly focused over northern Georgia into South Carolina. There were also several reports of tornadoes over northern Georgia."

A large shelf cloud was spotted rolling into Auburn, Alabama, on Monday afternoon. Many people took to social media to share images of the unique sight.

As Monday progressed, the threat for damaging storms and tornadoes shifted to Texas and Oklahoma.

Large hail and damaging winds were a threat late Monday afternoon and evening in these areas, according to Erickson. 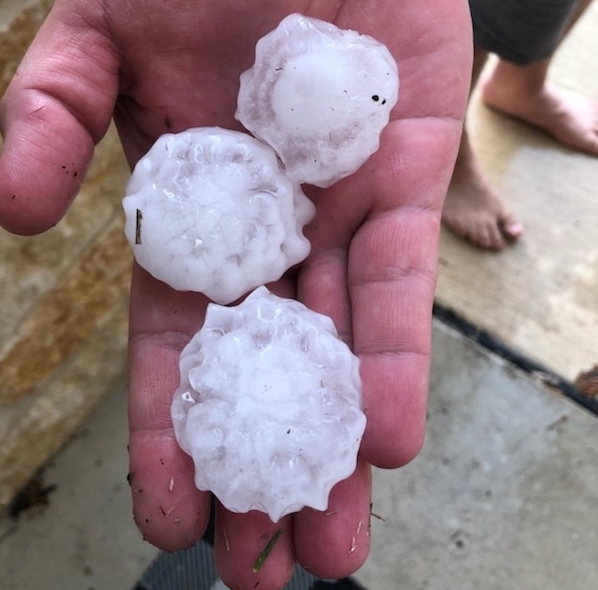 Golf ball-sized hail spotted at 7:10 p.m. CDT along the west side of San Antonio, Texas, on Monday evening. (Image via Amanda Alonzo)

Golf ball-sized hail was reported along the west side of San Antonio, Texas, on Monday evening as the storms started to ramp up. 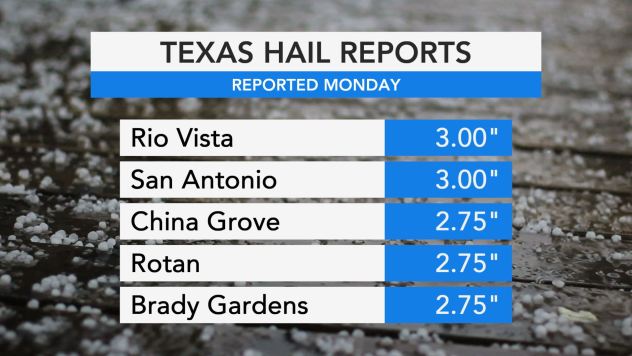 The storms in this region of the country initiated around 5 p.m. CDT with penny-sized hail pelting areas west of Dallas shortly after the first rumbles of thunder echoed across the city's suburbs.

Shortly after 9 p.m. CDT, there were reports of flipped over vehicles on Interstate 35 near Waxahachie, Texas, amid a tornado-warned storm.

AccuWeather National Reporter Bill Wadell, who was stuck in traffic due to the incident, said that I-35 northbound was completely blocked and first responders were having a difficult time making it to the scene.

Vehicle(s) blown over on I-35E southbound when tornado-warned storm moved through.

I-35E northbound is completely blocked and first responders are having trouble getting to the scene. #TXwx @breakingweather pic.twitter.com/NMSlNhT3ZV

Forecasters say that Texas and Oklahoma will catch a needed break from severe weather on Tuesday, but that violent thunderstorms will shift eastward into the Ohio and Tennessee valleys and Southeast.

Tornadoes and travel: How to stay safe inside an airport or hotel
Before summer moves in, read AccuWeather’s US summer forecast
Series of storms may ease dry snap in Midwest, East