Tuesday marks the darkest day of 2022: 86% of world’s population will experience nighttime simultaneously. Get the details.
Rare December tropical system could form this week in the Atlantic. Get the latest AccuWeather forecast.

Several communities are cleaning up after large and destructive tornadoes tore through Mississippi, including a dangerous nighttime tornado in Tupelo.

Nearly 100,000 Mississippi residents were under a tornado emergency on Sunday night, including the entire city of Tupelo, as a confirmed large and destructive tornado tore through the region.

Left in the wake of the night's weather was damage strewn across three communities, inflicting destruction on buildings and downing power lines.

Drone footage captured by Brian Emfinger of Live Storms Media gave unparalleled footage of a massive twister working its way over Yazoo City, Mississippi. The power of the tornado's inflow cut the connection between the drone and Emfinger's control, as he lost the device shortly after recording the powerful scene.

Yazoo City residents Vickie and Nathan Savell survived the Sunday night tornado, but their new mobile home did not. According to The Associated Press (AP), the couple's home had been completely destroyed after the twister lifted it off its foundation and tossed it about 25 feet. Vickie had been attending church at the time, while Nathan reportedly was driving home when he had to pull over and take shelter in his truck.

“Oh my God, my first new house in 40 years and it’s gone,” Vickie told the AP while surveying the damage on Monday.

Shortly before 10 p.m. CDT, the National Weather Service (NWS) issued a dire warning for the city of Tupelo, calling the situation particularly dangerous and life threatening as a confirmed tornado charged toward the city.

A tornado emergency can be issued when a large, destructive tornado has been on the ground for an extended period of time and is approaching a populated area.

"At 9:52 p.m. CDT, a confirmed large and destructive tornado was observed over Tupelo, moving northeast at 45 mph. TORNADO EMERGENCY for Tupelo. This is a PARTICULARLY DANGEROUS SITUATION. TAKE COVER NOW," the NWS warning said.

The Tupelo tornado, rated an EFI by NWS survey crews, was on the ground for 12.8 miles and had estimated peak winds of 100 mph.

Local law enforcement reported extensive residential damage around the Elvis Presley Museum Area in Tupelo, along with downed trees and power lines. Tupelo is the birthplace of Elvis Presley.

Around the Highway 151 area of town, local media reported a roof was torn off an apartment building.

The city of Tupelo's Mayor's Office released a statement on Facebook on Sunday night, stating that damage had been reported throughout the city. 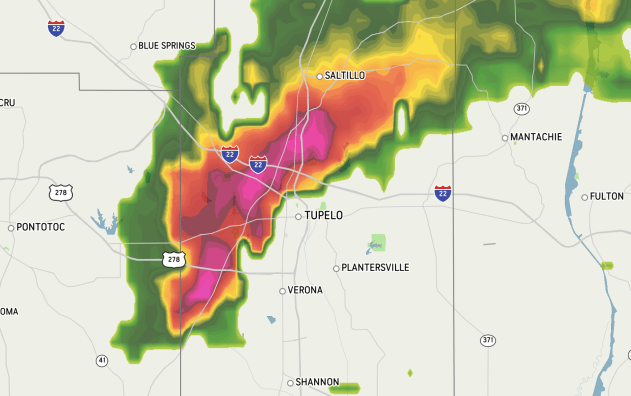 "Emergency crews are currently assessing the degree of damage. Please do not get out and drive. It is dangerous--there are reports that power lines are down on the roads. We will update you as soon as we know the extent of damage. Prayers that all are safe, and please keep our crews and first responders in your prayers also," the statement said.

Forecasters noticed a "debris ball" signature on radar as the storm charged toward Tupelo, indicating debris being picked up by a strong tornado and lofted high into the atmosphere.

Adding to the severity of the situation was the timing of the tornado. At night, tornadoes are extremely difficult to see.

"In parts of the south-central and southeastern United States, nighttime tornadoes are more common than in any other region of the nation," AccuWeather Senior Meteorologist Mike Doll said.

Screen captures of a Mississippi Department of Transportation camera along Interstate 22 at Veterans Memorial Bridge showed what appeared to be a large tornado illuminated only by a flash of lightning, or possibly a power flash. 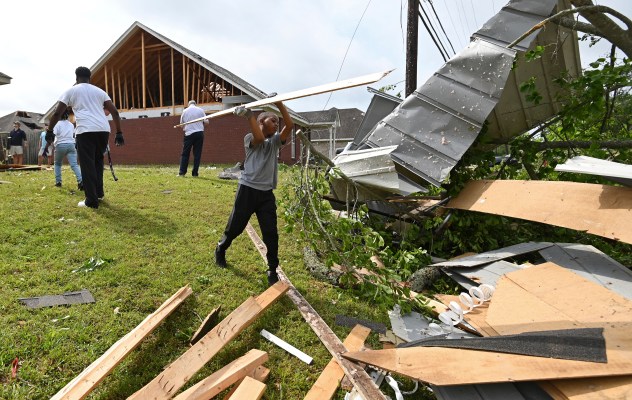 Derrick Pounds Jr. helps his father clean up debris around their house on Elvis Presley Drive in Tupelo, Miss., Monday, May 3, 2021. Multiple tornadoes were reported across the state on Sunday. (AP Photo/Thomas Graning)

The NWS's Storm Prediction Center reported nearly two dozen tornadoes in Mississippi on Sunday and Sunday night, along with two tornadoes in Louisiana.

What to do if you encounter a tornado while driving
Tornadoes and travel: How to stay safe inside an airport or hotel
The difference between tornado watches and warnings
Before summer moves in, read AccuWeather’s US summer forecast

The town of Calhoun City, Mississippi, was hit particularly hard about two hours prior to the devastation that ensued in Tupelo.

"The town of Calhoun City was hit hard tonight. Light poles have been snapped off. Trees in a few homes. Trees on vehicles. Damage to several businesses. Fortunately we have had no reports at this time of injuries. We are asking that you PLEASE STAY OFF THE ROADS AT THIS TIME. Emergency personnel are working feverishly to open the roads as quickly as possible," the Calhoun County's Sheriff's Office said on Facebook.

Forecasters urge residents to remain weather aware as yet another round of severe weather will target Mississippi and surrounding states on Tuesday and Tuesday night. This latest severe threat will once again include the potential for tornadoes.

'Moment of darkness': Tuesday is the darkest day for humanity in 2022