With warmer weather comes more people heading outdoors for camping. It also comes with the risk of severe weather. AccuWeather spoke with several park officials on how to stay safe from storms.

Thunderstorms will remain quite active over parts of the central United States to end the weekend. Storms on Sunday may not only disrupt outdoor activities and travel, but they could also be locally damaging and dangerous in portions of the Mississippi and Ohio valleys, AccuWeather meteorologists warn. The severe weather threat is expected to shift into the Mid-Atlantic and Northeast on Monday.

Following storms that were very drenching and gusty on Saturday, the atmosphere will turn up the intensity a bit on Sunday as a cool front begins to push eastward into a zone of very warm and humid air for the middle of May.

Pockets of thunderstorms formed into Saturday evening causing severe weather across the area. Baseball size hail was reported in Logan, Kansas, on Saturday afternoon. Heavy rain was also reported in these storms, including 3.63 inches of rain that was recorded in Willow Springs, Missouri, early Saturday morning. 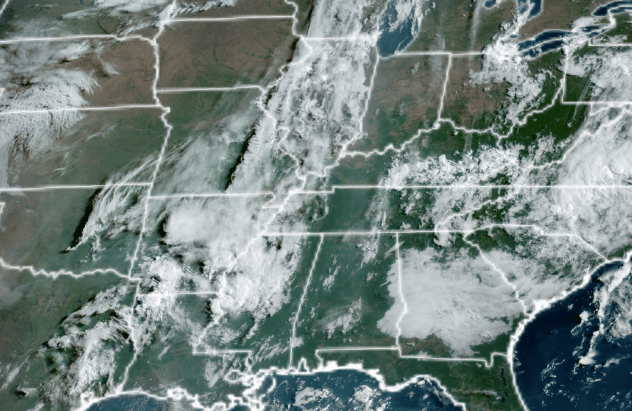 Some of the taller thunderstorms can be seen casting a shadow on Saturday morning, May 14, 2022, in this satellite image of the central and eastern United States. (GOES-East/NOAA)

The greatest threats from the storms on Sunday will be from damaging wind gusts and flash flooding. Winds on the order of 50-70 mph with an AccuWeather Local StormMax™ of 80 mph. Winds this strong can knock over weak trees and lead to property damage. Hailstones in some of the strongest storms can grow large enough to damage vehicles and plants, as well as break windows. 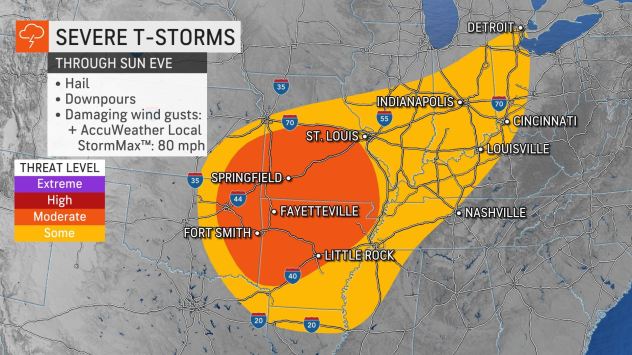 There is the potential for a concentration or cluster of storms to form near the southern part of the thunder zone on Sunday. If a complex of thunderstorms forms, the risk of flash flooding and damaging wind gusts could end up being more of a regional issue, rather than an isolated event.

The most likely area for a potent thunderstorm complex to occur on Sunday is from southeastern Kansas and southern Missouri, to eastern Oklahoma and northern Arkansas. Even if the strongest wind gusts fail to reach areas like the Ozark Mountains, the region is still prone to flash flooding. Campers in the region should keep up to date due to the risk of rapidly-changing weather and small stream conditions, meteorologists advise.

Rainfall over the past couple of weeks has varied significantly in the region that could be targeted by the thunderstorm complex with soil conditions ranging from dry to nearly saturated. Some locations, such as Fort Smith, Arkansas; Tulsa, Oklahoma; and Springfield, Missouri, have received between one and a half and two times their normal rainfall for the first half of May.

Should a complex of storms indeed form, it could continue to move along even farther to the south and east Sunday night. Storms may race southward into Louisiana in this case. 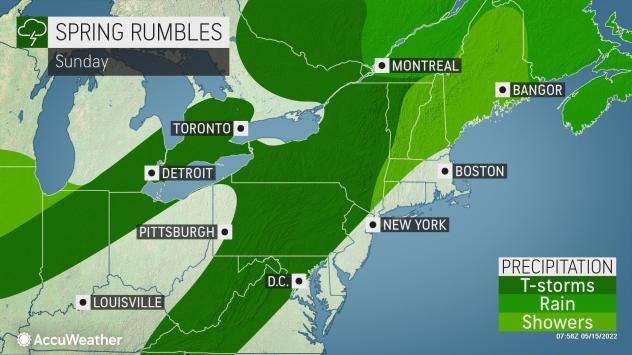 Regardless, the overall line of thunderstorms associated with the cold front will continue to advance Sunday night and stretch from southern Ontario and western New York state, to northwestern Mississippi and central Arkansas. Storms could lead to airline delays as they approach the hubs of Detroit, St. Louis and Cincinnati. Potent thunderstorms could survive well after dark with window-rattling thunder and vivid lightning.

The passage of the front will shave 10-20 degrees Fahrenheit off daytime and nighttime temperatures. Following highs in the 80s and 90s over much of the Central states on Saturday, highs will be in the 60s and 70s in many locations on Sunday. Humidity levels will be chopped over much of the north-central region as well, while the air will likely stay humid farther south.

As the front continues to press on to the east, severe weather is again likely to ramp up in portions of the central Appalachians, mid-Atlantic and New England regions on Monday and Monday night. Cities such as Albany, New York, Scranton, Pennsylvania and Washington, D.C. may be threatened by intense, fast moving thunderstorms during the afternoon and evening hours. 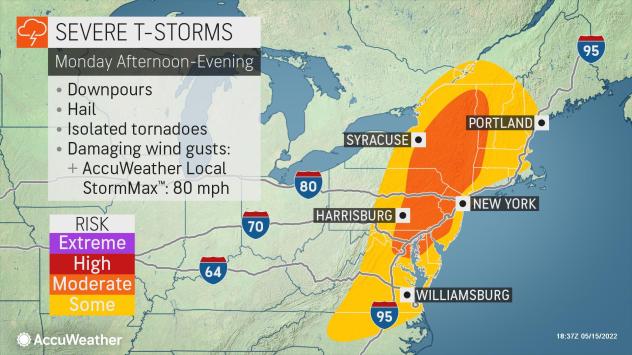 The main threat will again be from high winds with an AccuWeather Local StormMax™ of 80 mph. Just like that of the Central states, some of the stronger storms could bring damaging hail and isolated flash flooding. Since more jet stream energy may accompany the severe weather setup in the Northeast, when compared to the Central states, there is also the potential for a couple of tornadoes in the strongest storms.

Neil deGrasse Tyson sits down to talk about the stars, space travel
Chicago was hotter than Death Valley as heat wave surged north
Close call with lightning strike: ‘I thought I was a goner’