Summerlike temperatures will continue to spread north into the Midwest and northern tier of the Northeast, sending temperatures well above average and challenging records set as far back as the 1800s.

The May heat wave that has been broiling the southern Plains reached northward on Wednesday and sent temperatures surging throughout the Midwest. In an unusual twist, numerous locations across the nation's midsection, including Chicago, notched high temperatures well above the high temperature recorded at Death Valley, California, on Wednesday.

From Colorado to Iowa and Illinois, the mercury began to soar above normal levels on Tuesday with temperatures continuing to swell on Wednesday.

"This week has seen the most widespread push of heat so far this year for the eastern half of the nation," said AccuWeather Meteorologist La Troy Thornton.

Chicago experienced its first 90-degree day of the year on Wednesday with the high of 90 F breaking the daily record of 89 F, a mark that had stood since 1982. Typically, Chicago's first 90-degree temperature reading does not occur until June 10. On Thursday, Chicago hit 91 for the second consecutive day of 90-degree heat. On Friday, Chicago reached 93 degrees, making it the second-earliest heat wave on record, according to the National Weather Service. The earliest three-day stretch of 90-degree temperatures was on May 3-6, 1949.

About 75 miles northwest of Chicago, Rockford, Illinois, set a daily record for a second consecutive day. Following a record high of 92 degrees on Tuesday, the mercury skyrocketed to 94 degrees on Wednesday, which easily surpassed the daily record of 91 degrees from 2011.

Temperatures topping 90 degrees occurred as far west as Colorado. For the second time in five days, Colorado Springs reported a high temperature of 91 degrees, clearing the old record of 87 degrees set in 1961.

Parts of Nebraska were even warmer. While the record of 102 degrees will stand for at least another year in McCook, Nebraska, the high temperature of 99 degrees on Wednesday was 26 degrees higher than normal.

Meanwhile in Death Valley, California, often touted as one of the hottest places on Earth, reported a high temperature of only 78 F on Wednesday, about 21 degrees below normal there for this time of year.

Not only has it been hot, but the humidity is also high, sending AccuWeather RealFeel® Temperatures to soar above 100 degrees in some locations. This was the case again on Thursday from the Gulf Coast to parts of the Midwest. 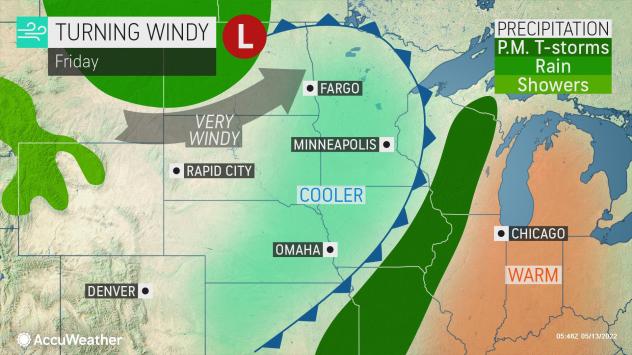 Temperatures have not been nearly as high farther to the east, but records have still been set.

The city of Caribou in far northern Maine reached 79 degrees on Wednesday. Even though that may sound pleasant to some, that was high enough to tie the record for the date, originally set in 2001.

"Heat has outperformed expectations as early-season warmups often do, especially in the East where the green-up is still occurring," explained Thornton.

With fewer leaves on the trees, more sunlight is able to make it to the ground and heat the air. In some locations, April was cold and even featured snow. This has caused buds and leaves to emerge later than normal. That said, it typically takes until May for vegetation to come out of dormancy in more northern locations.

A cold front will usher in cooler air across most of the northern Plains and Midwest by the start of the weekend while heat remains locked in across the southern Plains.

Widespread temperatures in the 80s F are still expected in the Midwest on Saturday, but a second cold front will cause temperatures to dip even lower on Sunday with highs in the 60s and 70s F. 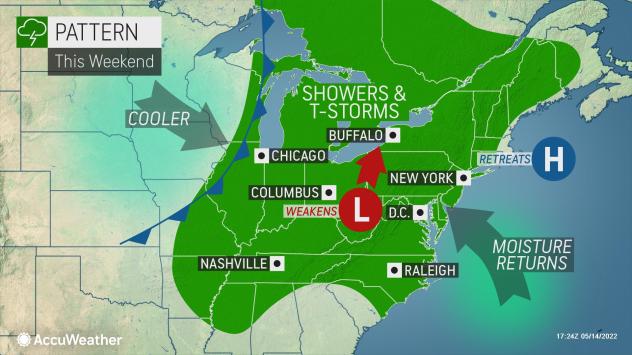 By Sunday, a cold front dropping down from the north will put an end to that warmth. Temperatures above 80 degrees will then be restricted to central and southern New England and parts of the mid-Atlantic, but temperatures will remain safely below record highs.

Next week, temperatures in the 90s will remain limited to the southern tier of the nation, where it is more typical in mid-May. However, abnormal heat will once again ramp up in the South Central U.S., where numerous daily record highs may fall.

AccuWeather forecasters say locations in Texas and Oklahoma will have to gear up for a prolonged stretch of record-setting heat during the upcoming week. Many locations across the state will encounter temperatures on the order of 10-20 degrees above normal. 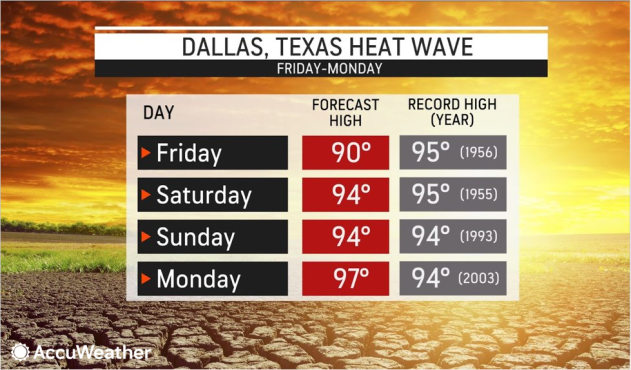 "It's possible that Dallas breaks a daily record high temperature multiple times from Saturday onward," AccuWeather Meteorologist Mary Gilbert said. "Daily high temperature records can be broken or tied each day through at least Wednesday of next week."