AAA says roads will be busiest the Wednesday afternoon before Thanksgiving, but it may not be the typical holiday traffic you're used to.

As Americans prepare to celebrate Thanksgiving and feast safely amid growing coronavirus concerns, a tumultuous weather pattern could add to the worries for some Americans in the days leading up to the holiday. A multi-faceted storm could deliver everything from a taste of winter to the Plains and Great Lakes to a feeling of deja vu to springtime with drenching rain, gusty winds and perhaps even a threat for tornadoes in the Southeast.

Wintry mix for the Upper Midwest

A storm system will start to spin up in the central Plains on Monday, and it will meet up with cold air that will already be in place across the northern Plains and Great Lakes. The cold air will follow a fast-moving storm set to sweep through the region over the weekend. 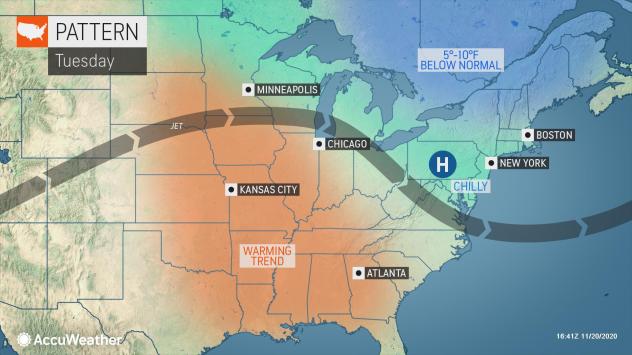 This will set the stage for some wintry precipitation on the northern fringes of the storm from Monday night into Tuesday.

"Moisture and milder air will attempt to surge northward Tuesday in the Midwest. As it meets the cold air that will already been in place across the region, it will start as some snow and sleet," AccuWeather Meteorologists Derek Witt said.

"Eventually, it will change over to plain rain for just about everybody, but before that, there could be a couple of slushy inches of snow and sleet, leading to some slick roads for a time." 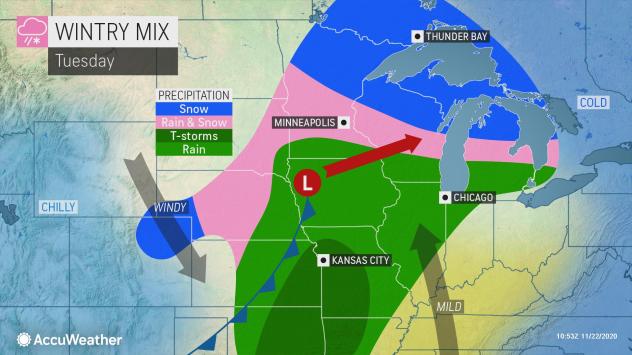 Areas from Minnesota across northern Wisconsin and into northern Michigan will have the best chance of some snow and sleet accumulation before a changeover to rain could occur Tuesday afternoon and evening.

Places such as Minneapolis and Green Bay, Wisconsin, could get some wintry weather just in time for the Tuesday morning commute. Even as far south as Madison, Wisconsin, an icy mix may fall first thing Tuesday morning before precipitation quickly changes to rain.

As areas well to the north prepare for the potential of wintry weather, those farther south will have an altogether different threat to worry about.

"By Tuesday into Wednesday, the center of the storm system will re-form farther south and begin to move through the Southeast. This will help to pull more warm, moist air from the Gulf of Mexico," Witt explained. 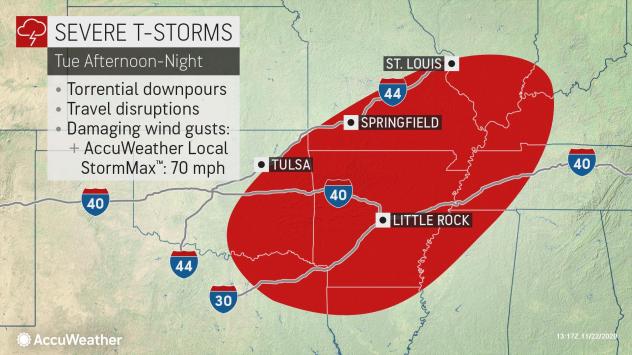 "With the track father south, the rising motion from the area of low pressure will meet this warm, moist air and could heighten the risk for severe thunderstorms."

Tornadoes cannot be ruled out with the set of weather ingredients expected to take shape.

Phoenix has never seen a hot spell like this so late in the year before Thanksgiving week forecast: What will Mother Nature dish out this year? Drastic pattern flip to target northeastern US How you can help those providing aid in Central America following Iota and Eta

"The low pressure area will provide 'directional wind shear,' or a change in wind direction with height," Witt said, adding that this factor is what often creates a rotating motion that can help thunderstorms turn severe. The changing winds with altitude could "help to spawn tornadoes," he said.

According to forecasters, the risk for damaging thunderstorms will start on Tuesday, across parts of eastern Oklahoma and Texas into Arkansas and Louisiana. On Wednesday the threat may shift east into Mississippi and Alabama. 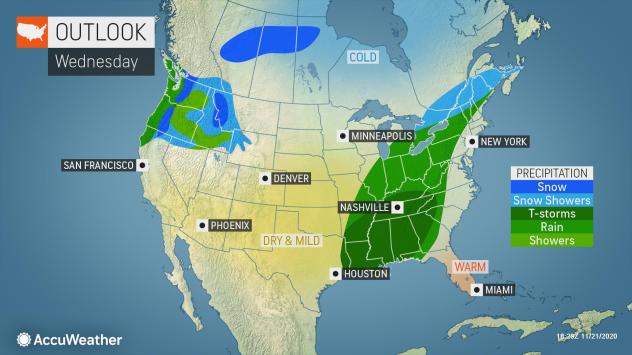 Places such as Shreveport, Louisiana and Little Rock, Arkansas could face the threats of damaging winds, torrential downpours and perhaps a tornado on Tuesday.

Travel along routes like Interstate 20 could also be disrupted and may become dangerous as the storms erupt.

Forecasters also pointed to some weather factors that could inhibit severe thunderstorms from igniting.

"If it becomes too cloudy or rainy ahead of the main storm system, that can prevent the development of severe thunderstorms," Witt explained.

Still, meteorologists urge residents across the South to be prepared and monitor the forecast in the coming days.

Heavy rain, localized flooding for some areas in between

"There could be a couple of areas to watch out for with the potential for heavy rain," Witt said. "The first will be in the Midwest on Monday, as the first part of the storm system starts to take shape." 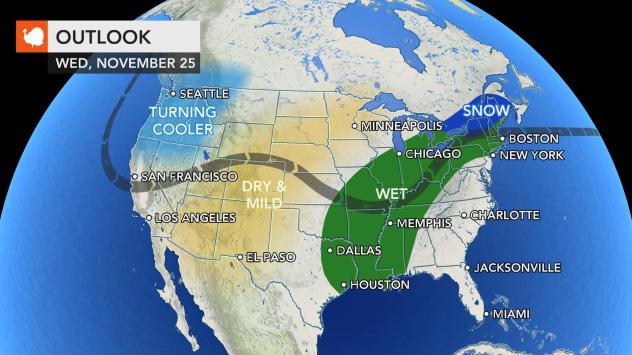 A swath of drenching rain could cross from parts of eastern Nebraska across Iowa and into northern Illinois.

"The main threat, other than a very raw, cold rain Monday night into Tuesday morning, would be some ponding of water on streets and in poor-drainage areas."

Flooding may not be widespread, but it may become problematic for motorists. Forecasters cautioned that people should never drive through flooded roadways, even if the water looks calm or shallow. Water can be much deeper than it appears, and roadways can become compromised underneath floodwaters. 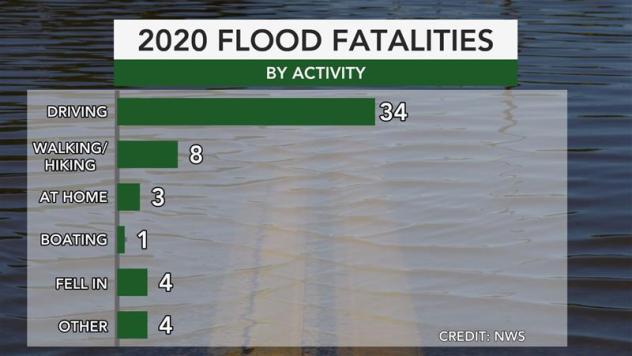 A majority of flood-related fatalities reported in 2020 were from people who encountered floodwaters while driving in the U.S. (National Weather Service)

"As the center of the storm system re-forms farther south, the same transition that will lead to the threat of severe thunderstorms, it will also bring the potential for heavy rain from the mid-Mississippi Valley to the lower Ohio Valley and Tennessee Valley," Witt said.

As thunderstorms are projected to rage to the south, heavy rain is expected to push from the Ozarks to the central and southern Appalachians. Localized flash flooding will be a concern, along with flooding of streets and poor-drainage areas.

Any drains that are still leaf-clogged could worsen street flooding in urban areas. A general 1-2 inches of rainfall is anticipated, with higher amounts likely where heavy rain is more persistent. 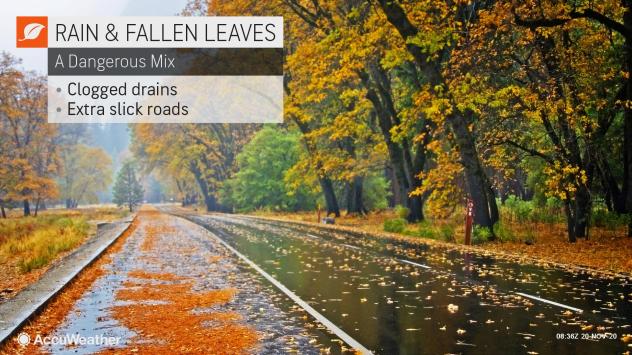 Farther north, a cold rain will continue to push from the Midwest across the Great Lakes and Ohio Valley and into the Northeast Tuesday into Wednesday.

"While these areas won't really have hazardous weather to contend with, it's not going to be particularly pleasant Tuesday into Wednesday either, with gray skies and periods of chilly rain," Witt said.