After a weekend of storms in the southern Plains, the severe pattern has shifted north. Dangerous thunderstorms will rattle the region with wind and hail.

As a series of storms continues to spin from the Rockies to the Plains and Midwest, parts of the central United States will continue to be in the crosshairs of severe weather and the risk of tornadoes through the middle of this week.

Rayno was referring to all forms of weather visible on the map across the U.S. this week ranging from record-challenging warmth in the East and winterlike chill with snow in parts of the West. In between, near the clash of warm and cool air, rounds of severe thunderstorms will ignite through the middle of this week.

Dozens of severe weather incidents, including large hail and damaging winds, and about a dozen reports of tornadoes were centered on Oklahoma, northern Texas and southwestern Missouri Sunday and Sunday night. The same storm that triggered these violent storms pivoted northeastward over the Central states Monday evening. Severe storms that rattled locations from Illinois to Michigan lead to reports of high winds, hail, flash flooding and isolated tornadoes on Monday night.

However, the risk for severe weather won't end for central parts of the nation as the first storm moves away.

Another storm that was getting underway early this week that unloaded feet of snow over parts of the Rockies while drawing in much cooler air and gusty winds over the West, in general, will re-activate severe weather and the tornado risk as it shifts over parts of the Plains states through Tuesday night.

One factor that adds to the dangers posed by severe weather is the element of timing. Often severe weather peaks during the hottest hours of the afternoon, but when a potent storm system such as this acts as a trigger, the result is severe weather occurring under the cover of darkness. AccuWeather forecasters say it is important for people to have a means of receiving severe weather watches and warnings even during the night. 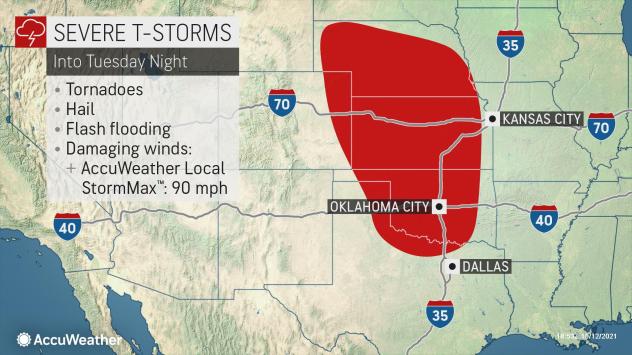 Some of the same areas in Oklahoma that were pummeled with high winds, heavy rain, hail and tornadoes late Sunday and Sunday night will be targeted by severe weather again Tuesday night.

"The greatest risk of tornadoes appears to be centered west of Oklahoma City with this next round," AccuWeather Director of Forecasting Operations Dan DePodwin said. Because of the potent nature of this new storm system, just like its predecessor, the most likely time for severe storms capable of producing tornadoes will be toward sunset on Tuesday and into the first part of Tuesday night, DePodwin added.

As the storms evolve, they are likely to congeal into one or more lines of torrential downpours, strong wind gusts and hail while progressing slowly eastward over the central parts of Nebraska, Kansas, Oklahoma and Texas later Tuesday night, AccuWeather Senior Storm Warning Meteorologist Eddie Walker said. 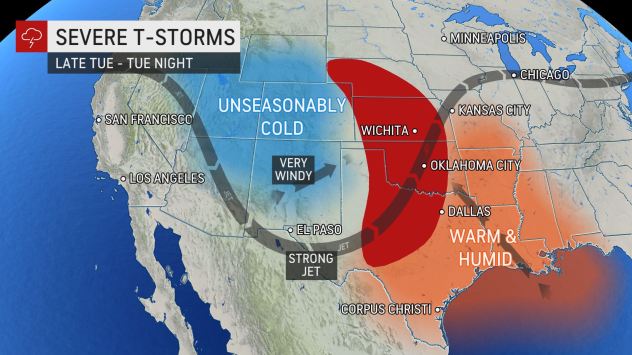 It is not uncommon for severe weather to ramp up in the autumn months. This secondary severe weather season is set off by the strengthening jet stream and frequent clashes of cool and dry air with lingering warmth and Gulf of Mexico moisture during October and November.

While the overall number of tornadoes for 2021 is below the recent three-year average, there have been some spikes during the spring and summer, according to the National Weather Service Storm Prediction Center. As of Oct. 4, a running tally from the Storm Prediction Center indicates that there were 1,007 preliminary reports of tornadoes across the country in 2021. May yielded the highest number of tornadoes for any month this year with 289 and was above the three-year average of 269. This October is poised to finish above the 19 confirmed tornadoes from October 2020.

This new storm will take a northeastward track that is similar to the Sunday-Monday storm as well so that a large part of the Mississippi Valley and Midwest, including Chicago, may face severe weather on Wednesday or at least the potential for heavy, gusty thunderstorms. 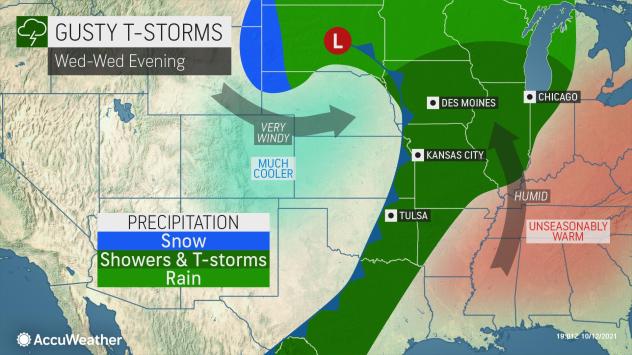 As thunderstorms ramp up during the afternoon hours and persist through the busy commute time in the evening each day through Wednesday, travel delays on the highways and at the airports in the region are expected.

AccuWeather forecasters urge motorists to avoid driving through flooded areas as water can be deeper than it appears. Floodwaters can also rise rapidly, and roads can be compromised beneath the water.

As is the case with any thunderstorm, lightning strikes will be a threat. Approximately 400,000 lightning events were detected across Oklahoma on Sunday as thunderstorms swept through, according to Chris Vagasky, a meteorologist with Vaisala, a lightning detection company. People are encouraged to move indoors and away from windows at the first rumble of thunder. Golf carts and picnic pavilions do not offer adequate protection from lightning. 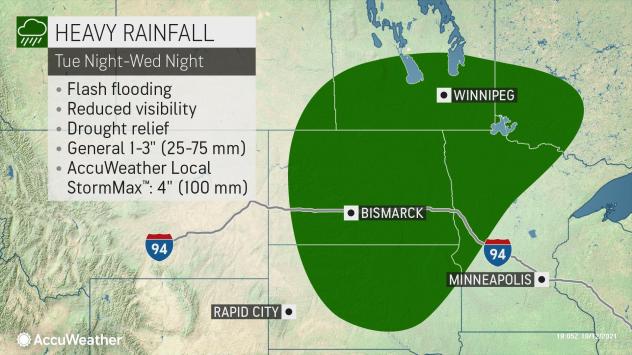 The storm will create a broad zone of strong winds on its western and southern flanks. These drying winds will pivot eastward from the Southwest states to portions of the central and southern Plains at midweek in the wake of showers and severe thunderstorms. However, the dry air may only advance so far to the east as a zone of rain and thunderstorms has the potential to stall from central Texas to southeastern Oklahoma and western Arkansas ahead of tropical downpours from Pamela in the Eastern Pacific.

As if the risk of tornadoes, thunderstorm-driven high winds and flash flooding was not enough, winds are expected to become strong enough in the wake of severe weather to create problems for high-profile vehicles and trigger sporadic power outages.

But the storm won't bring bad news everywhere. Because of the sprawling nature of the potent storm spanning Tuesday and Wednesday over the Central states, rich moisture is forecast to reach parts of the Dakotas and southern Manitoba, Canada -- drought-stricken areas in great need of rainfall.

"This will be the second storm in a few days to bring drenching rain and will go a long way toward easing drought conditions in the region," AccuWeather Senior Meteorologist Brett Anderson said.