Streets and homes were inundated with floodwaters and transportation ground to a halt on Monday when one Indian city received more than 50% of its normal rainfall for the entire month of September in just 24 hours.

The dangers of flash flooding

Streets and homes were inundated with floodwaters and transportation ground to a halt on Monday when the Indian city of Kolkata received more than 50 percent of its normal rainfall for the entire month of September in just 24 hours.

AccuWeather forecasters say an area of low pressure that originated in the Bay of Bengal brought a record-breaking period of torrential rainfall over Kolkata to start the week. In a 24-hour period ending Monday morning, Kolkata, the capital of India's West Bengal state, received 5.60 inches (142 mm) of rainfall. 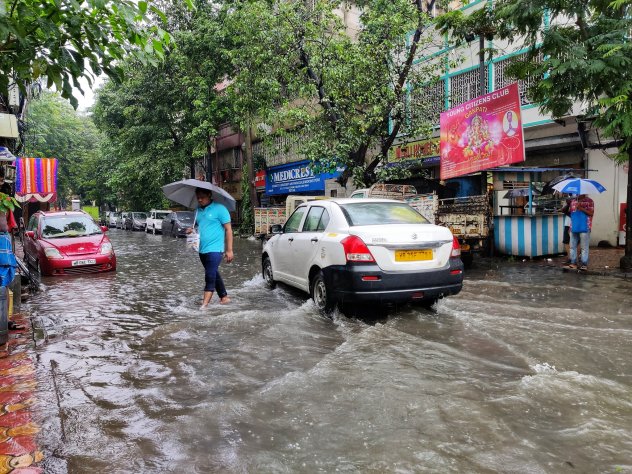 According to the India Meteorological Department (IMD), the only larger single-day rainfall total in September ever recorded occurred on Sept. 25, 2007, when 6.85 inches (174 mm) of rain fell, making the rainfall that deluged Kolkata early this week the heaviest rainfall in nearly 14 years.

The heaviest rain occurred over the course of Sunday night and many residents woke up to significant flooding issues on Monday morning.

Streets were completely flooded as commuters waded through knee-high to waist-high floodwaters. Vehicles that attempted to forge floodwaters were submerged in water that reached the top of the tires and created waves that crested higher than front headlights. 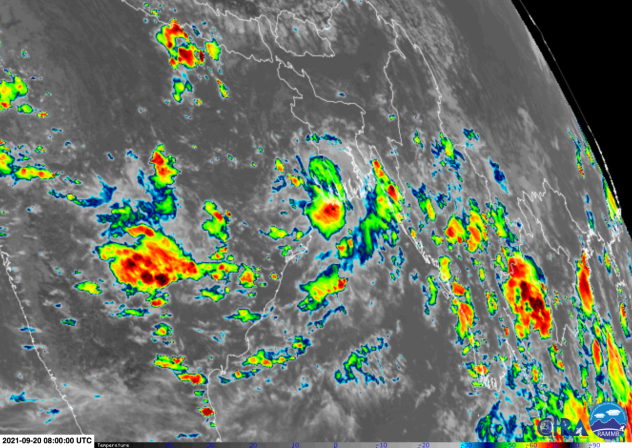 In this satellite image, captured on Monday afternoon, Sept. 20, 2021, areas of heavy rain continue to target portions of the state of West Bengal. (CIRA/RAMMB)

Portions of the Netaji Subhas Chandra Bose International Airport in Kolkata were underwater for a time on Monday, but the airport was still able to operate without a complete shut down.

However, other transportation services were completely overrun by floodwaters. Operation of the Kolkata Circular Railway, a railway loop that encircles the entire city, was suspended on Monday, according to the Hindustan Times.

Moment of the Day!

One of the primary reasons this early week rainfall led to so many issues throughout Kolkata, home to 14.85 million people, was the unusually high rainfall rates.

“Kolkata’s drainage system can handle up to 6 mm (0.2 of an inch) in an hour, but several parts of the city received over 100 mm [4 inches] of rain in four or five hours. It is impossible to avert waterlogging in such a situation,” a Kolkata Municipal Corporation (KMC) senior engineer told to The Telegraph India.

“We operated all 76 pumping stations in full capacity, yet the water could not be drained out from most places till Monday evening,” said the KMC engineer.

On average, the city receives a total of just under 11.5 inches (292 mm) of rain over the course of September, largely due to the effects of the Southwest monsoon.

For residents hoping to begin cleaning up after Monday's flooding event, AccuWeather forecasters caution that Mother Nature may not be of much assistance through at least midweek.

"A weak area of low pressure will bring rain, some heavy, to Odisha and West Bengal, including Kolkata, into Wednesday. Scattered, generally lighter, rains are expected the rest of the week," AccuWeather Lead International Meteorologist Jason Nicholls said.

West Bengal wasn't the only Indian state to encounter severe weather this week. In the state of Madhya Pradesh, at least five people were killed and at least one other was injured as a result of lightning strikes on Tuesday.

The frequency of lightning strikes is often elevated during India's monsoon season.

From April 2020 through March 2021, over 18.5 million lightning strikes were recorded across the country and nearly 1,700 people were killed by lightning, according to information gathered by India's annual lightning report.

Ian will be Florida’s 1st major hurricane in 4 years