After an unusually quiet May in terms of tornado activity across the United States mainland, June 2020 followed suit by hitting some record lows. 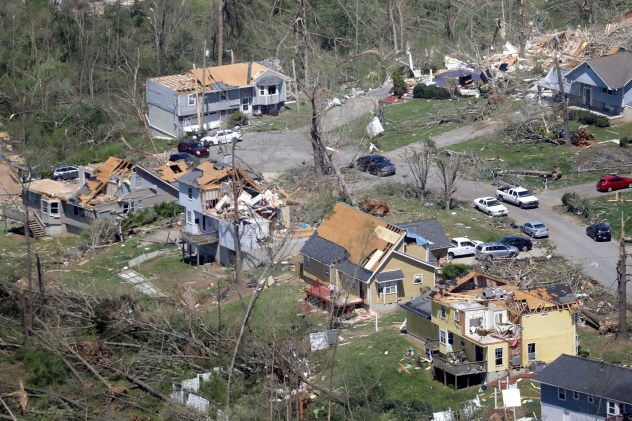 Additionally, the NWS reported just 50 preliminary tornadoes in June 2020, the lowest number recorded since 1952, when only 34 tornadoes were recorded. "This number could go up once official storm data is published, but it likely will not exceed the 63 total tornadoes from June 1988," the NWS said. The all-time low for tornadoes in the month of June is 28 in 1950.

There was just one tornado of EF2 strength or higher last month, an EF2 twister that touched down in Beaver County, Pennsylvania, northwest of Pittsburgh on June 10. The NWS estimated wind speeds topped out at 120 mph, and the EF2 twister left a trail of damage, Action News 4 reported, but it was not blamed for any injuries or fatalities. June 2020 set the record the lowest number of EF2 or stronger storms for the month of June since record-keeping began in 1950. The previous record was three in 2006.

"A tornado classified as EF2 or higher would be a strong or violent tornado with winds in excess of 111 mph," AccuWeather Meteorologist Alyson Hoegg said.

The record-low trend in June followed an abnormally calm May, as well. May is typically the most active month for tornadoes across the U.S. in a calendar year; however, May 2020 only had 139 preliminary tornado reports nationally, compared to an average of 269.

"May was a chilly time in the East with no chance for the warm air to bring these strong storms," AccuWeather Senior Meteorologist Alan Reppert said. June was also dry in much of the region, which hindered the development potential for these storms, he added.

Severe weather as a whole experienced a lull last month, the NWS said. During the month of June, there were 4,044 total preliminary severe weather reports throughout the country, compared to the 2018-19 average of 4,940. 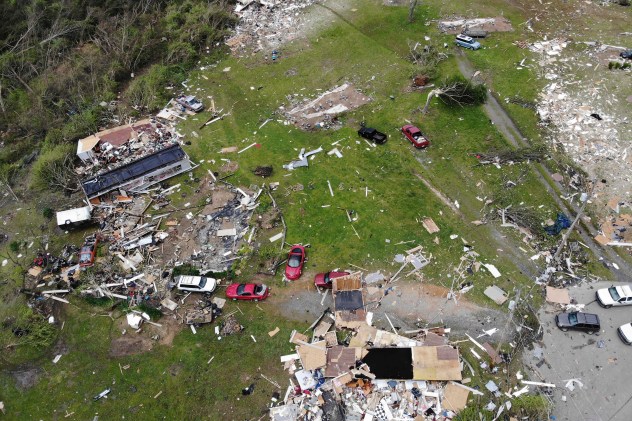 This photo taken by a drone shows a mobile home park that saw multiple deaths after a tornado hit on Monday, April 13, 2020, in Chatsworth, Ga. Severe weather has swept across the South, killing multiple people and damaging hundreds of homes from Louisiana into the Appalachian Mountains. Many people spent part of the night early Monday sheltering in basements, closets and bathroom tubs as sirens wailed to warn of possible tornadoes (AP Photo/Angie Wang)

Reppert said the reason for the unusually calm June was due to a ridge of high pressure dominating the weather across much of the Plains and the East.

In the second portion of the month, "a pretty strong and established ridge of high pressure" kept severe weather risks at a low, he said.

"There was really no major area of focus for the month of June, [the tornado activity] was in the northern Plains and also some areas around the Gulf Coast and into the Midwest," Reppert said.

While the number of tornadoes was low the past two months, tornado reports generally have been rising in the U.S. Some experts believe the rise in reports is due to growth in technology use and the population growth of the nation. Previously, tornadoes and severe weather were underreported due to a lack of documentation. As a result, tornado reports have grown 20 percent over the last 40 years and 10 percent over the past 20 years.

Through the first half of 2020, 838 tornadoes were reported across the U.S. by the NWS Storm Prediction Center, compared to the three-year average of 1,355. Twenty-two of those tornadoes have been deadly, killing a total of 74 people.

Regardless, the lack of severe weather can be expected to follow into July, according to Reppert, with heat preventing storm surges.

"Typically in July and August, the tornado threat slackens no matter [what], so it’s going into a time of much less activity, except for outside of tropical activity," he said.

Although tornadoes can occur at any time, the U.S. tornado season typically runs from March through November or sometimes into early December. On average, tornadoes cause 80 U.S. fatalities annually. Last year, tornadoes were blamed for killing a total of 41 people.

Woman, 23, tells her terrifying story of being struck by lightning inside her home
Flood experts say 6M more homes may be at risk than previously found
Photographers capture the natural beauty of lightning strikes