Woman, 23, tells her terrifying story of being struck by lightning inside her home

A woman in Bellingham, Massachusetts, is lucky to be alive after being struck by lightning inside her own home during a thunderstorm on July 1.

A simple on switch of a lamp nearly proved fatal for a Massachusetts woman on Wednesday when a jolt of electricity from a nearby lightning strike came through the house's wiring.

"I'm just very happy to be alive and I'm happy to be coming home to my children tonight, because it could have gone a very different way," Shelby Klopf said after returning home the night of the accident. 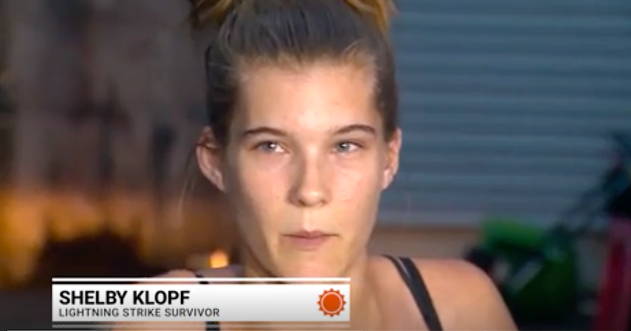 Shelby Klopf, 23, recounted the moments leading up to and immediately after getting struck by lightning in her home to ABC reporters. (ABC News)

The 23-year old resident of Bellingham was working from home in an enclosed porch that juts out of her house and into the backyard. When she reached to turn on the light, the jolt sent her flying backwards.

“All the sudden, I felt a huge boom, saw an extremely bright white light that has now affected my vision and I flew back,” she said. 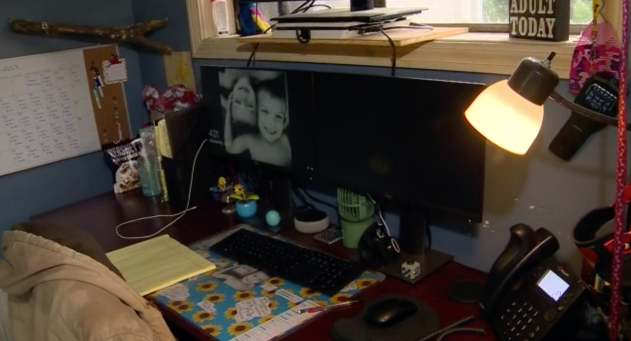 Shelby Klopf was working at this desk when she reached to turn on the lamp. Immediately, she was jolted backwards by an electric current from a nearby lightning strike. (ABC News)

Just 10 minutes earlier, Klopf's two young children were playing outside before coming in once the storm started.

According to AccuWeather Meteorologist Brett Rossio, a storm system that has remained nearly stagnant across New England over the past several days has remained the focus for showers and thunderstorms developing each afternoon with a little daytime heating.

"Some of the stronger storms have produced gusty winds as well," he said. "Bellingham was one of these locations that had one of these gusty thunderstorms."

When family members heard the boom, they raced downstairs to find Klopf on the ground, arms straight out and fingers paralyzed, as her mother-in-law Renee Rovedo described.

Klopf, a bit unsteady after the nearly tragic incident, is helped inside by her mother-in-law after returning from the hospital. (ABC News)

Klopf was rushed to UMass Memorial Medical Center in Worcester before returning home later that night, but not without immense pain. She said that the shock gave her carpal spasms in her hands and feet, and she has also suffered from some memory loss. 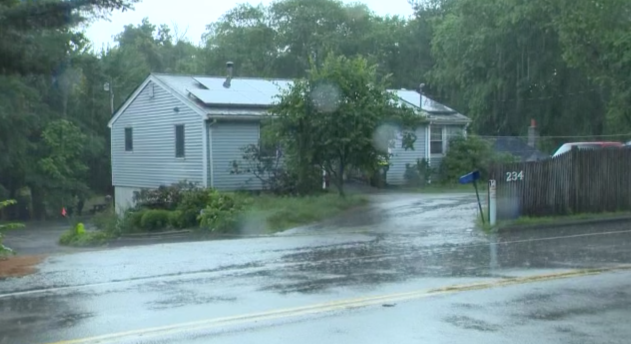 The home Klopf was working in wasn't impacted by the lightning in any form, however in 2002, a lightning strike triggered a small fire at the home. (ABC News)

Perhaps most shockingly, no visible damage was dealt to the home. However, 18 years ago, a lightning strike triggered a small fire at the same home, CBS reported.

Across New England, heavy rain and thunderstorms dotted the region, occurring in parts of Connecticut, Vermont and Massachusetts on Wednesday and triggering severe thunderstorm warnings.

Lightning safety specialist with the National Lightning Safety Council John Jensenius recently shared safety tips in an interview with AccuWeather's Monica Danielle. The tips include getting to safety indoors or in a hard-top, fully-enclosed vehicle as soon as you hear thunder. Once indoors, there are other important precautions to take to remain safe, according to Jensenius:

“When you have a thunderstorm, you're going to have lightning. However, one of the things you can do, whether it's a building or your home is you can put up some lightning protection,” Jensenius said, adding that often people think of lightning rods when it comes to protecting your home.

A lightning rod is designed to intercept lightning and conduct it down into the ground, so it doesn't cause major damage to buildings.