Hazardous thunderstorms to rumble through Midwest

All forms of severe weather will be possible this week as multiple rounds of storms take aim at the northern Plains and Upper Midwest.

Thunderstorms with hail, damaging wind gusts and flooding downpours rumbled through portions of the Midwest on the first day of August, and more of the same is expected through at least Wednesday night, AccuWeather meteorologists say.

A line of thunderstorms barreled through central Indiana Monday morning. The storms unleashed strong winds that downed trees, knocked out power and even caused damage to some structures in the Indianapolis area. By the afternoon, thunderstorms developed in southeastern Illinois and produced large hail and reports of wind damage and flash flooding. All of these hazards will be possible with additional storms this week.

Thunderstorms continued to develop into Tuesday evening. Strong winds downed trees and power lines in the Upper Peninsula of Michigan.

Meanwhile, another area of thunderstorms formed in southeastern South Dakota later in the evening. These were some of the most intense storms from Tuesday, with a 79-mph wind gust recorded in South Dakota. An even stronger wind gust of 81 mph was measured as the storms crossed into Minnesota. While the storms lost some intensity as they continued eastward around midnight, a 62-mph wind gust was even recorded at the Minneapolis-St. Paul International Airport.

At midweek, severe thunderstorms are likely to erupt and slice across more heavily populated and traveled areas of the Midwest. 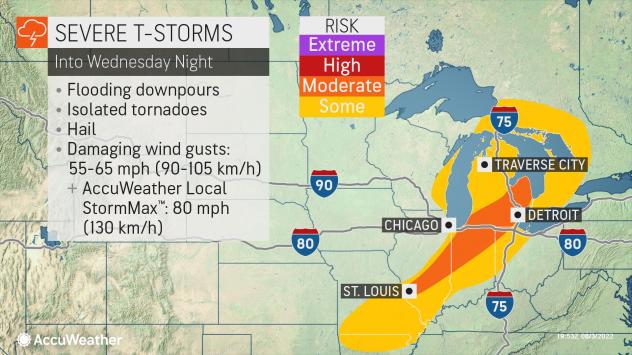 The midweek expanse of severe weather is forecast to be larger in scope, mainly due to the expectation that a long line of storms will form.

"St. Louis and Detroit could be at risk," said Kienzle. The storms ramped up as they moved across Chicago during the mid-afternoon hours on Wednesday. Poor travel conditions are likely due to areas of heavy rain and gusty winds during evening rush hour south and east of the city.

More than 32 million across the Midwest could be at risk of some form of severe weather Wednesday, according to the National Weather Service's Storm Prediction Center.

"The clash of cooler, drier air colliding with high heat and humidity ahead of a cold front will be the primary culprits for the potentially damaging thunderstorms," explained AccuWeather Senior Meteorologist Mike LeSeney.

Although these storms could also continue overnight, they may weaken more quickly than those Tuesday. Regardless, residents of several large cities will need to keep an eye on the sky Wednesday afternoon and evening.

"Even if the storms that fire from the daylight hours on Wednesday lose their severity in terms of high winds, hail and tornadoes, the potential for torrential downpours and flash flooding are likely to persist as they push slowly southward through Illinois, Missouri and northern Arkansas on Wednesday night," AccuWeather Senior Meteorologist Alex Sosnowski said. 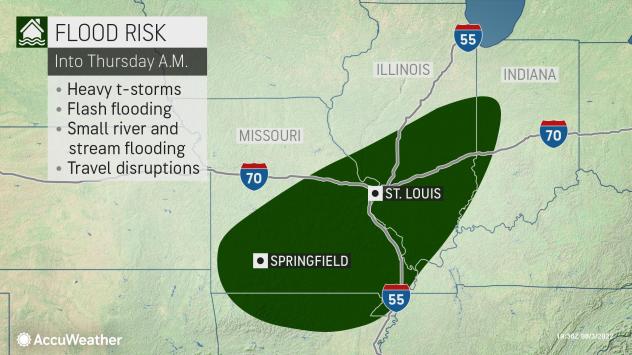 Areas that were hit with heavy rain in Missouri and Illinois over the past week will be the most prone to renewed flash flooding into Thursday morning. There is the potential for the situation to become life-threatening in some communities due to rapidly rising water.

"It is possible that with any gusty thunderstorms that rolls through areas where the ground is saturated and trees remain waterlogged, an abnormally high number of power outages can occur," Sosnowski said.

Thunderstorms are forecast to rumble from Maine, southwestward to southern Michigan and the Ohio Valley as Thursday progresses.

Heavy rain will be the primary hazard with those storms, and there will be a low probability of severe weather. By Friday, these storms will help put an end to the hot weather expected in the Northeast.