Firefighters battle the Lionshead Fire in Warm Springs Reservation, Oregon, on Sept. 2. The video showed orange skies and even a dust devil spotted.

Despite the extreme heat finally relaxing across parts of the West, the threat for more fire dangers remains high through midweek.

The extreme heat raged across the western United States throughout the weekend. Highs soared as much as 10 to 20 degrees Fahrenheit above normal in cities like San Francisco and Los Angeles to Phoenix and Denver.

Los Angeles soared to 111 degrees Fahrenheit on Sunday, which smashed their daily record of 102 and fell just two degrees shy of their all-time record high of 113. New all-time record highs were set or tied in Van Nuys, San Luis Obispo, Burbank, Lancaster, Palmdale, Paso Robles and Camarillo to end the weekend. Woodland Hills recorded a high of 121, which is the highest all-time temperature ever recorded at an official site in Los Angeles County, according to the National Weather Service.

The Rockies and parts of the Central Valley, like Sacramento and Fresno, held on to the extreme heat through Labor Day and once again challenged records. Even though Fresno reached 106 degrees, this fell just shy of the record of 108 degrees. However, the high of 105 degrees did surpass the previous record of 103 degrees in Sacramento. Meanwhile, other parts of the West Coast began to see cooling effects on Monday.

As if the long-standing heat wasn't bad enough, Mother Nature has thrown gusty winds into the mix this week as cooler air filters in. However, the strength of the wind will far outweigh any benefits the lower temperatures bring in terms of fire prevention and control.

An area of high pressure is forecast to build over the interior western U.S. While this high pressure system will push colder air and September snow southward across the Rockies and High Plains, its main effect will be to generate gusty winds over the Great Basin and along the Pacific Coast states. Even though some cooler air will accompany the wind, it will not be enough to avoid a substantial increase in wildfire ignition and rapid spread. 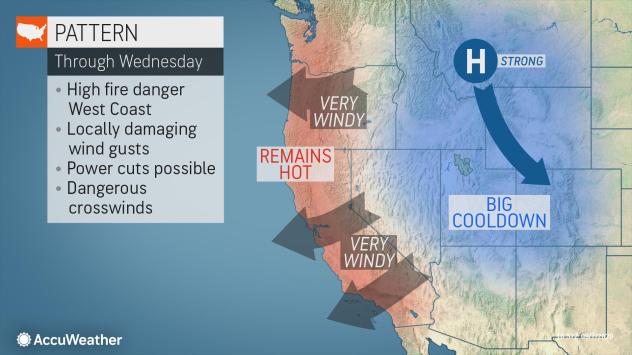 The windiest conditions are likely in the Northwest into Tuesday night and in the Southwest, including Southern California, through Wednesday evening.

While gusty winds are typical in this part of the country, the timing of this event is uncommon.

"It is extremely unusual to have this strong of a wind event this time of year. Something of this magnitude would typically be later in the year," said AccuWeather Senior Meteorologist Brian Thompson.

While winds may not get as strong as traditional Santa Ana or Diablo events, they could still cause major problems. The potential exists for dangerous fast-moving wildfires (firestorms) this week due to ongoing dryness and drought conditions. 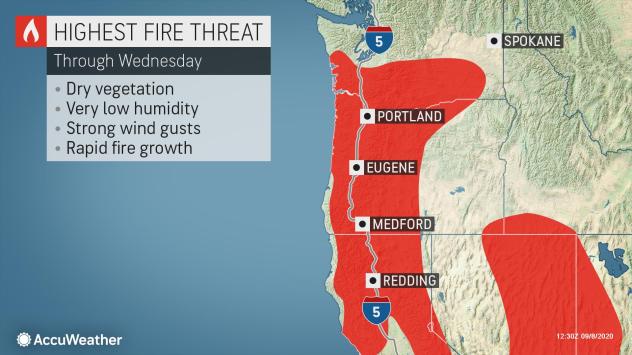 In the Northwest, Portland, Oregon, will be at risk for strong easterly winds that funnel through the Columbia Gorge. Wind gusts could reach 50 to 60 mph at times through Wednesday.

How to prepare your home for a wildfire
Weather Explained: How do wildfires start and spread?
Fast-growing wildfire traps campers at reservoir in central California

In addition to any ignited blaze rapidly growing, power outages are also a concern in the region. Downed wires could also be the spark that starts a wildfire.

Gusty winds will continue to fan fires ongoing across California as well as any new ones that may begin. 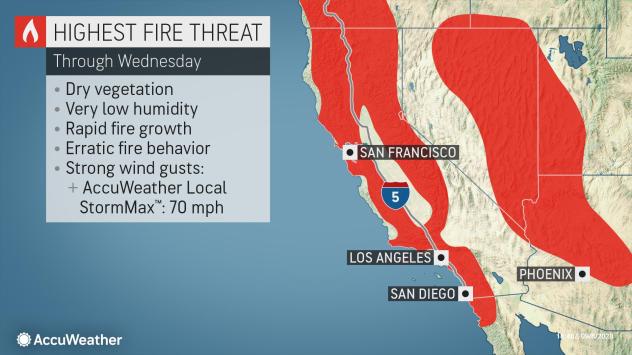 The gusty winds anticipated by AccuWeather can not only cause erratic wildfire behavior and extreme difficulty for containment, but also could bring down trees and power lines, which can cause sparks and cause more fires to ignite.

It is possible that utility companies may need to cut power to reduce the risk of lines coming down and causing sparks. That means that some areas may be without air conditioning in the heat this week.

"The increase in fires will continue to lead to widespread smoke and haze across the West this week, especially in California where this has already been an issue this past weekend," Thompson said.

Huntington Lake in Fresno County in California was under an evacuation order on Saturday due to the fast-spreading Creek Fire.

The weather pattern may bring a second surge of heat later this week.

After a cooldown with temperatures trending 5-20 degrees lower during the first part of the week as a piece of the chilly air filters westward and southward, temperatures are likely to rebound to very high levels at midweek.

Correction: This story previously stated Sacramento was in the San Joaquin Valley. The city is located in the Sacramento and greater Central Valley.