Dallas County confirmed the first fatality from the record breaking flooding that impacted the Dallas/Fort Worth metroplex on Monday, with some parts of the city picking up more than 15 inches of rain.

The Dallas/Fort Worth metroplex was overtaken by a slow-moving thunderstorm late Sunday night into Monday, resulting in a rain event that established the area's highest 24-hour precipitation total in nearly 90 years, leaving one dead and prompting a barrage of flash flooding and subsequent water rescues.

Throughout the day on Monday, the city was all but brought to a standstill as officials urged motorists to stay off the roads and carried out rescues of those whose vehicles were caught in the floodwaters. Monday evening, Dallas County Judge Clay Jenkins reported that a 60-year-old woman was killed when her vehicle was swept away in the flooding. Meanwhile, tens of thousands were without power for a time on Monday and air travel at local airports was disrupted.

The heavy rain began under the dark of night on Sunday. Flash flood warnings issued in parts of Dallas late Sunday quickly gave way to nearly 10 inches of rain in a short period near the downtown area, creating submerged roadways and forcing water rescues throughout the area.

Rainfall continued well into Monday, with the total 24-hour rainfall of 9.19 inches as of 2 p.m. local time noted as the second-highest total ever and the most since September 1932, according to the National Weather Service (NWS).

From Sunday afternoon to 7 a.m. local time Monday, Dallas-Fort Worth International Airport measured 7.03 inches of rain. This is more rainfall than the combined period from May 1 through Aug. 20, which produced just 6.53 inches of rain. Dallas typically gets 8.2 inches of rain over the summer.

Dallas reported 3.01 inches of rain in one hour overnight, provisionally the station's highest 1-hour rainfall on record. Based on preliminary damage assessments in the area, Jenkins declared a state of disaster in Dallas County Monday evening, requesting state and federal assistance for those affected.

Dallas has been in the throes of an exceptional drought this summer, according to the U.S. Drought Monitor, and experienced a 67-day streak during which no measurable rain fell -- the second-longest such streak in city history. That streak ended on Aug. 10, but drought conditions, as well as unusually hot weather, have persisted until the deluge that occurred Sunday into Monday. 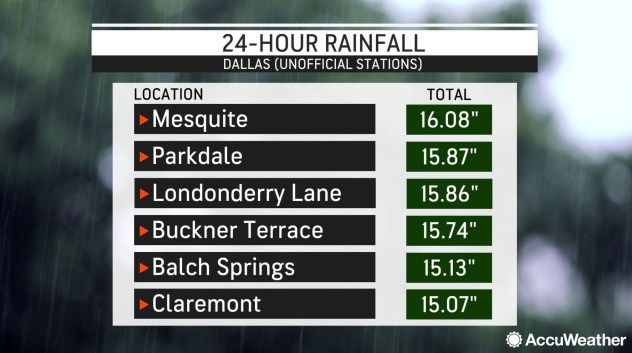 Unofficial amateur weather stations reported over a foot of rain, with 15.86 inches at Londonderry Lane and 15.87 inches of rain in east Dallas in Parkdale.

"With rain falling so quickly onto an area with many roads and other hard surfaces that cannot soak in water, that is a combination that we've seen lead to incredible damaging urban flooding," AccuWeather Meteorologist Andrew Johnson-Levine said.

Austin, Texas, resident Suzanne Huff was dog sitting in Dallas when the heavy rain started. When she woke up early Monday morning, her van was flooded. Water levels were up to the headrests in her minivan.

"The windows were up when we went to bed last night," Huff told Wadell. "[This morning,] they're down. We can't get it unlocked. We're carrying stuff in to try and dry stuff out."

Cynthia Moreno, a New Orleans resident visiting Dallas, and her friend had to swim to safety once their car died in the floodwaters Sunday night. Moreno told Wadell the water level was up to her chest at some points.

Video footage from storm chaser Brandon Clement showed I-30 blocked with deep floodwaters early Monday morning. According to Clement, multiple water rescues were underway along I-30.

Anne Elise Parks, a meteorologist at CBS Dallas-Fort Worth, shared a photo on social media of the view of I-30 from one of the traffic cameras. Numerous cars and trucks could be seen partially submerged underwater.

Dallas police reportedly said that, in addition to all of the overwhelmed civilian vehicles, at least 22 squad cars were either damaged or completely destroyed due to the floods.

Water rescues continued Monday afternoon in the southeast Dallas suburb of Seagoville, with first responders carrying residents in their arms across a neighborhood with high water levels.

On Monday morning, a ground stop was put into effect for Dallas-Fort Worth International Airport due to heavy rain and thunderstorms. As of 8 p.m. CDT Monday, 161 arriving flights were canceled at the airport, with 478 delays, per FlightAware.

The heavy rain and thunderstorms in Dallas also resulted in a ground stop for all arriving traffic at the Dallas Love Field Airport. On Monday afternoon, George Bush Intercontinental Airport in Houston also issued a ground stop for some arriving flights.

It wasn't just roadways that were flooded. The raging waters flowed into apartments and low-lying areas across the city. One east Dallas resident shared a photo on Twitter of nearly 2 feet of water that flooded the first floor of his apartment. In the murky water pictured, a white couch, Peloton workout bike and desk could be seen all partially submerged in the water. 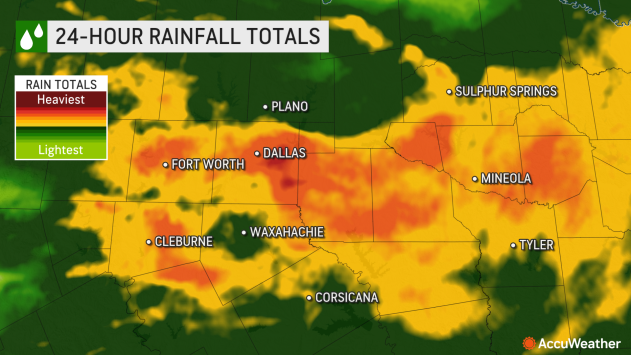 Over 36,000 customers were without power as of Monday afternoon, according to PowerOutage.US. Most power outages were across the northeastern corner of Texas, including over 6,000 outages in Dallas County.

According to AccuWeather forecasters, a slow-moving front across the southern Plains and Southeast will interact with tropical moisture this week. This will bring more flooding downpours across the South Central states through Thursday.

“An additional widespread 2-4" of rain may occur with 6"+ in a few spots,” AccuWeather Chief Meteorologist Jon Porter said. “There has already been a foot of rain in some areas with major flooding earlier, numerous road closures and water rescues - and the additional heavy rain can result in additional life-threatening flash flooding.”