AccuWeather meteorologists continue to monitor the potential for powerful thunderstorm complexes this week, which could span hundreds of miles if conditions line up correctly.

Residents across the northern Plains, Midwest and into the Appalachians will need to remain on alert over a multiday span as atmospheric conditions should prove to be conducive for multiple rounds of thunderstorm activity. AccuWeather meteorologists continue to monitor the potential for powerful thunderstorm complexes early this week, which could span hundreds of miles if conditions line up correctly.

The weather pattern that will spawn a multiday thunderstorm risk is in response to a rather peculiar jet stream setup. A potent storm forcing cool air into the Northwest will clash with a dome of high pressure anchored over the Plains, setting the stage for thunderstorms to erupt.

On Sunday, damaging thunderstorms rolled across portions of Montana and brought damaging wind gusts and hail to the state. Sunday evening, a wind gust of 78 mph was reported within a severe thunderstorm near Sand Springs, Montana, according to the Storm Prediction Center (SPC). In South Dakota, hail the size of baseballs was reported Sunday evening near Wasta. Thunderstorm activity continued on Sunday night as storms persisted in the northern Plains.

Many of the same areas that experienced thunderstorm activity on Sunday can expect to face another threat of severe weather into the Independence Day holiday across the High Plains. 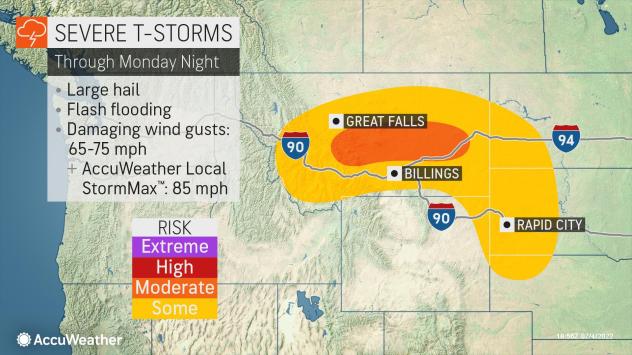 One differing factor in Monday's forecast is that this threat is expected to expand eastward into the Midwest as well. With many cities hosting parades, festivals and firework celebrations on Monday, it will be prudent to keep a close eye on the radar ahead of any adverse weather.

Madison and Milwaukee, Wisconsin, and the Chicago metropolitan areas could experience some of Mother Nature's fireworks Monday evening instead of any regularly scheduled firework celebrations.

Travelers on large sections of Interstates 35, 75 and 90 will need to keep an eye to the sky, especially from the afternoon onward, as rapidly-changing conditions develop.

"Storms that fire up on Monday are projected to move rather quickly, so conditions can change at a moment's notice," AccuWeather Meteorologist Mary Gilbert said. 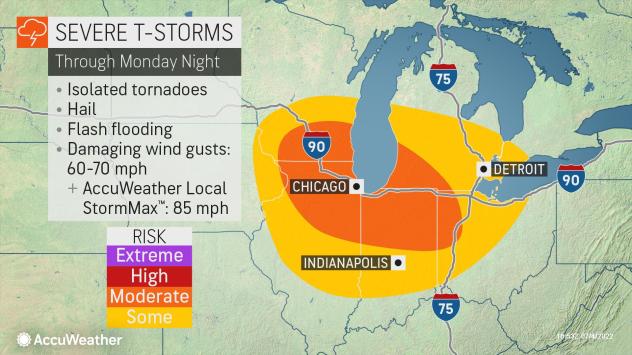 This stormy pattern could contribute to even more flight delays at travel hubs across the region early this week.

"Unfortunately, we think there will be many more flight delays and cancellations," AccuWeather Chief Meteorologist Jon Porter said of the travel rush at the end of the holiday weekend and days to follow.

It is possible that enough atmospheric energy could be bottled up across the Midwest to allow thunderstorm activity throughout the overnight hours to continue right into the day on Tuesday. A general southeastward progression of the thunderstorm risk is anticipated, which would put the Ohio Valley and the central Appalachians next in line for damaging thunderstorms.

Cities like Columbus and Cincinnati, Ohio, as well as Charleston and Morgantown, West Virginia, will be at risk for severe thunderstorms. The strongest storms on Tuesday will have the ability to produce flooding rainfall, hail and damaging wind gusts with an AccuWeather Local StormMax™ of 85 mph. Isolated tornadoes cannot be ruled out either, forecasters say. 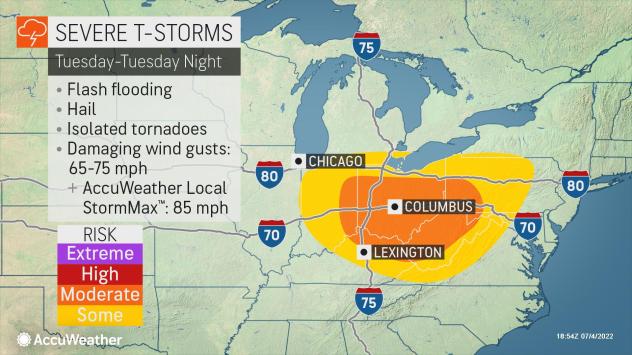 This period from Monday night into Tuesday will be closely monitored for potential derecho development across the Midwest.

If a storm complex continues to cause damage continuously or intermittently for 400 miles or more along a 60-mile-wide or more swath, such a meteorological phenomenon is deemed a derecho, according to the SPC. The official derecho criteria were recently revised upward from 240 miles or more. 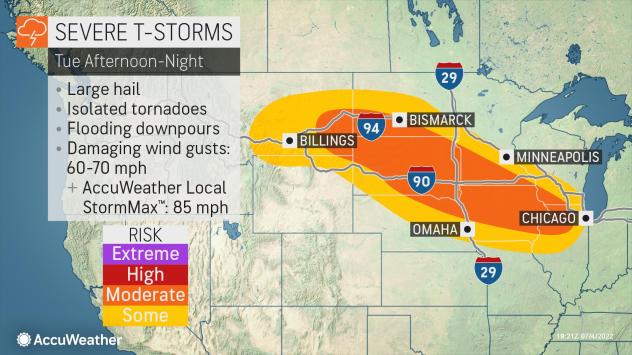 A derecho can be an especially devastating weather event that is sometimes likened to an inland hurricane. Recent derechos have caused extreme damage in the United States, particularly a derecho that caused widespread destruction across Iowa in August 2020. Ten years ago, a derecho charged 600 miles from the Midwest to the nation's capital, leaving a trail of destruction and knocking out power for more than a million.

Approximately 70% of all derechos occur during the warm months of May, June, July and August, according to the National Weather Service.

While a high-impact derecho would not be welcome by anyone in its path, one beneficial factor to the stormy pattern would be the soaking rainfall. Abnormally dry conditions have expanded across the Midwest in recent weeks, so bouts of heavy rain would prove helpful in mitigating the expansion of any drought.

Farther west on Tuesday, yet another complex of severe thunderstorms is likely to develop across Montana and the northern Plains. 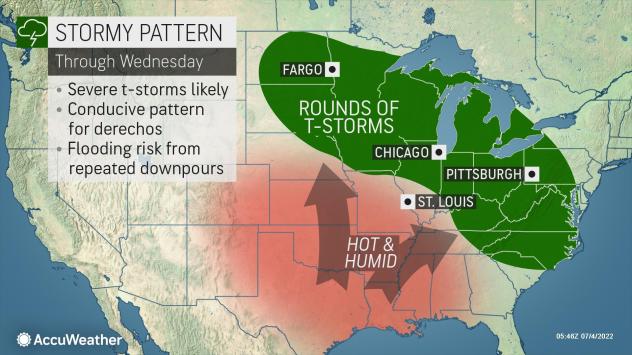 There is the potential for 1-3 inches of rain to fall through midweek in the zone from the northern Plains to the southern and central Appalachians. In some cases, much of this rain may fall in one or two rounds. In others, it may be smaller amounts on a daily basis. Just as local communities could be slammed by 3-6 inches of rain with much of that occurring on one or two episodes, other places could still dodge much of the rainfall through the week.

"Thunderstorm complexes are responsible for about 60% of the rain during the summer months over a large portion of the Midwest," AccuWeather Senior Meteorologist Dale Mohler said. "Corn needs about 1 inch of rain per week to do well."

The threat of rain is not expected to end after Tuesday's wet weather either, as additional waves of showers and thunderstorms could march from the Dakotas through the western Great Lakes during the latter half of the week.