AccuWeather forecasters say an area of showers and thunderstorms northeast of the Bahamas is likely to become a tropical depression or storm in the next couple of days. The feature, dubbed 96L by the National Hurricane Center (NHC), may approach North Carolina on Thursday and Thursday night, bringing with it the potential for some heavy squalls and dangerous seas up and down the coastline.

The area of unsettled weather caught the attention of AccuWeather forecasters this past weekend, and on Wednesday, they upped the risk for tropical development from medium to high potential. Further organization is likely as a storm in the middle layer of the atmosphere can spin down to the lower part of the atmosphere, where tropical systems dwell.

AccuWeather Chief On-Air Meteorologist Bernie Rayno said the zone of showers and thunderstorms in the southwestern Atlantic was beginning to look better organized on Wednesday morning. 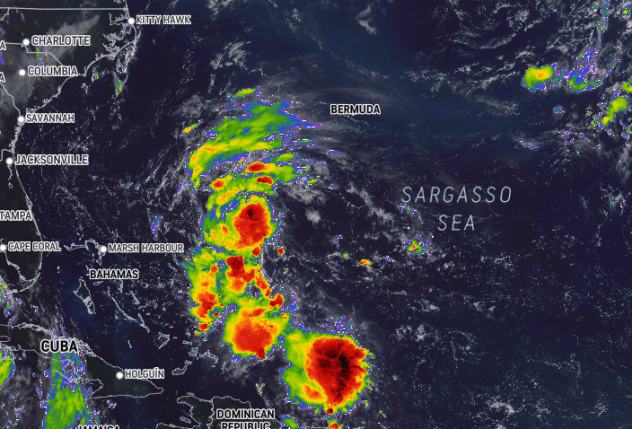 A feature, designated as 96L by the National Hurricane Center, was located northeast of the Bahamas on Wednesday, Sept. 15, 2021. (AccuWeather RealVue™ Enhanced Satellite)

The tropical trouble spot drifted farther to the west-northwest at 10-15 mph as it became slightly better organized on Wednesday. As organization and strengthening continue, the system may be steered more to north-northeast as it approaches the eastern part of North Carolina from Thursday to Friday.

“There’s going to be west-southwest [wind] shear so that most of the rain and wind will probably be on the eastern side and maybe offshore,” Rayno said, adding that the Outer Banks of North Carolina may experience some tropical-storm-force wind gusts and heavy rain late Thursday into Friday.

There is no indication that 96L will undergo explosive development in the short term, but there is a chance for a tropical depression or storm to form from Thursday into Friday. Waters over this part of the Atlantic basin are sufficiently warm and generally in the 80s F. Water temperatures of 78 degrees or higher are considered to be high enough to allow tropical depression formation and nurture a developed tropical system. 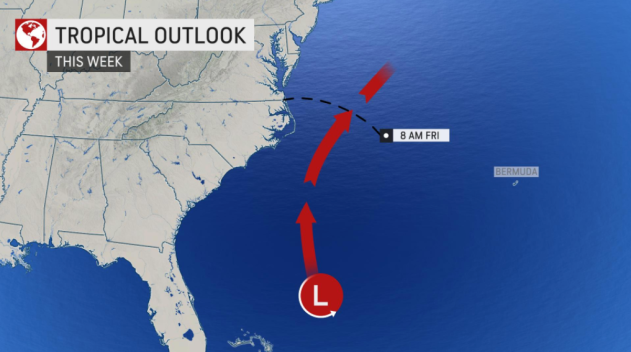 The next two names on the list of tropical storms for the 2021 Atlantic hurricane season are Odette and Peter. There's another tropical trouble spot farther out in the open waters of the Atlantic that will be in competition for the next name of the season. The potent system recently emerged from Africa, designated as 95L by the NHC, and has a chance of developing into a tropical depression and storm in the short term over the eastern Atlantic.

There is a range of scenarios in the future track of 96L during the second half of this week and this weekend, according to AccuWeather meteorologists.

One scenario allows the system to take a steady curved path close to the Carolina coast first and then up near the mid-Atlantic and New England coasts. In this scenario, the system would be drawn in and then picked up by a dip in the jet stream. This track would allow rain and locally gusty winds to reach these coastal locations. 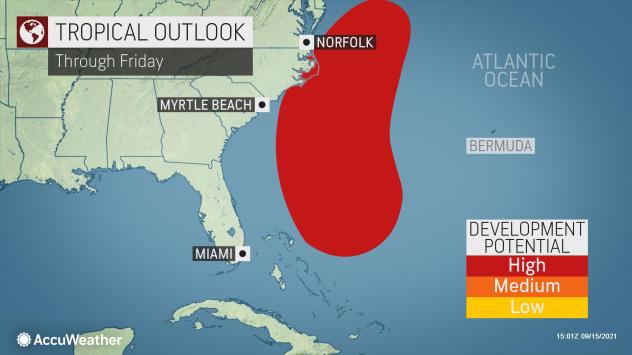 Another possible track may keep the system far enough offshore to prevent rainfall directly associated with the system from reaching the East Coast. But, this track might still allow moisture from a frontal zone to linger and tropical moisture from the western Atlantic and/or the Gulf of Mexico to move in and trigger precipitation.

A third possibility is that the storm may make a loop off the U.S. East Coast, where it could first approach then back away from the Eastern Seaboard. This looping action could happen more than once, and the system could still be lurking just off the East Coast well into next week as a result.

At this time, AccuWeather meteorologists are predicting that some drenching rain may reach the Carolinas due to the approach of the system in the western Atlantic as well as the approach of a cold front from the Midwest. 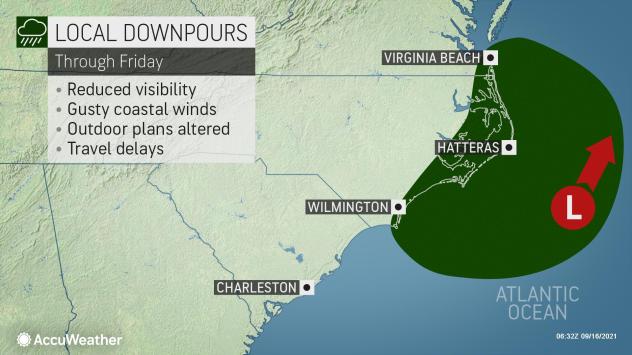 Some moisture from Nicholas may get involved as well. Nicholas made landfall along the upper Texas coast Monday night as a Category 1 hurricane as is forecast to lose wind intensity as it moves farther inland, but it will still raise the risk of flooding as a tropical rainstorm over the Southern states in the coming days.

Regardless of whether or not the new system being watched develops into a tropical storm, stormy conditions are anticipated to agitate Atlantic waters along the East Coast of the U.S. later this week and this weekend.

The increased wave action is likely to make for rough surf and strong rip currents from the Carolinas northward to southern New England. Low-lying areas along the Atlantic that are prone to flooding at times of high tide may experience some problems as the system unfolds. 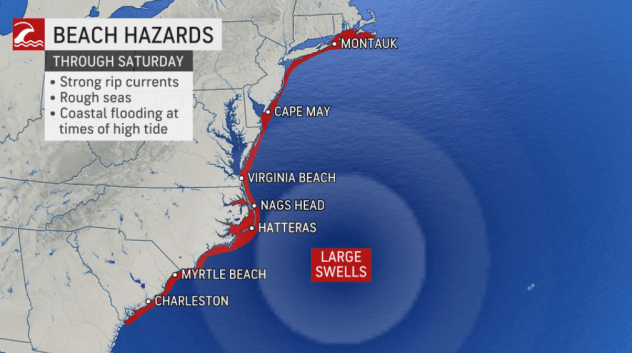 Beach, boating, cruise and shipping interests should monitor the situation as conditions may deteriorate during the middle and latter part of this week over the western Atlantic between the U.S., the Bahamas and Bermuda.

AccuWeather will continue to provide updates on the tropical weather situation along the Atlantic coast and in more distant waters.

Even though the 2021 Atlantic hurricane season is still behind the pacing of the record 2020 season, it continues to run well ahead of the average pace. Based on data from 1991-2020, an average hurricane season produces 14.4 named storms, of which an average of 7.2 develop into hurricanes and 3.2 of those storms become major hurricanes. 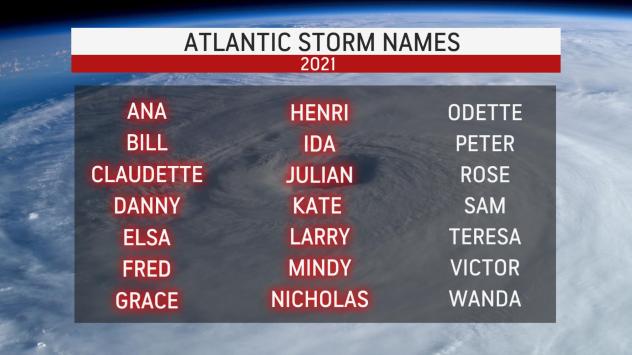 AccuWeather is projecting 20-25 named tropical storms with as many as 10 hurricanes and five to seven major hurricanes in 2021. One or two more systems may have a direct impact on the U.S., following eight so far.