After strengthening into a hurricane mere hours before landfall, Nicholas dealt a scathing blow to Texan cities prone to flooding and could further complicate recovery in areas ravaged by Ida.

Intense wind and rain howled through Surfside Beach, Texas, on Sept. 13 and 14, as Nicholas swept through the Texas Gulf Coast. The winds damaged roofs of homes and knocked over a gas station canopy.

Nicholas came blasting ashore just after midnight on Tuesday as a Category 1 hurricane, the second hurricane to make landfall in the United States this season and the 19th named storm to hit the U.S. in the last 17 months. Under the dark of night, Nicholas unleashed wind gusts as high as 95 mph near where it made landfall, causing all manners of damage, and drenching rains that, combined with storm surge, resulted in widespread flooding.

And Nicholas reached hurricane force just prior to landfall, overcoming multiple atmospheric conditions to do so.

"Things are -- starting to get a little gusty."

Extreme Meteorologist Reed Timmer stood on the beach of Matagorda Peninsula, Texas, on Monday, Sept. 13. The landfall of then-Tropical Storm Nicholas wouldn't happen until after midnight, but already he was experiencing sustained winds of tropical-storm-force "that'll almost take your breath away," as Timmer described between the gusts.

As it lurked off the coast of Texas, Nicholas sat on the brink of hurricane force. The warm water of the Gulf of Mexico was prime fuel for the storm, but its proximity to shore and wind shear were enough to prolong any meaningful strengthening at the time. However, Texans weren't about to stall preparations even for a tropical storm.

The Galveston County Office of Emergency Management began staging its high water assets on Sunday, the day Nicholas had been named, to prepare for the potential flooding from the storm.

"Just because it's a tropical storm or even a depression doesn't mean that it's less volatile of a situation than a hurricane," Jake Hardgrave, a volunteer at the Texas Search and Rescue (TEXSAR), told AccuWeather National Reporter Bill Wadell. "Historically, it could be worse [than a hurricane]."

As the night went on, Nicholas gathered strength. It overcame the wind shear and its proximity land to strengthen into a Category 1 hurricane by Monday night before landfall just after midnight and less than 70 miles from where Harvey had come ashore in 2017. After Hurricane Ida, Nicholas became the second hurricane to make landfall over the U.S. during the 2021 Atlantic hurricane season.

John Lambert, a resident of Seabrook, Texas, had gone to bed underestimating Nicholas, only to wake up in the middle of the night after the storm had been upgraded and was making landfall. Seabrook is located roughly 80 miles northeast of Matagorda, between Houston and Galveston.

"Started off kinda slow and then it worked up to a good howl. About 2 o'clock in the morning it started rolling in and [I] noticed a lot of branches and trees coming down," Lambert told Wadell. "And then the rain started picking up a little bit and coming, like Forrest Gump said, 'coming in sideways.'"

Video of the storm tearing through Surfside Beach, Texas, shows fierce winds howling through flooded streets. Storm surge inundated houses and businesses alike. Whether or not sandbags lurked beneath the water, one market filmed had not been able to prevent the storm surge from seeping in and flooding the shop. 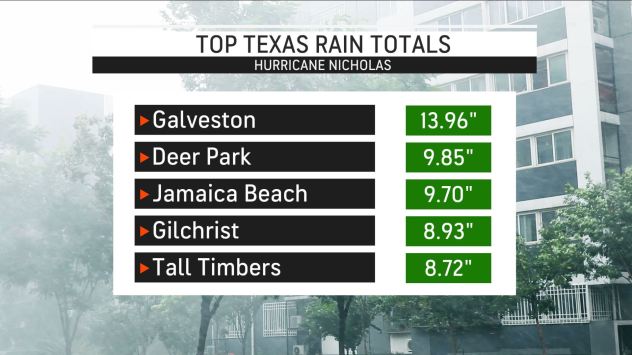 Storm surge ushered in by Nicholas exacerbated the results of the rainfall, leading many to wake up Tuesday morning and find their vehicles submerged. While Seabrook has no storm surge gauges, the stations to the north and south had 4- and 4.2-foot storm surge, respectively.

Houston and surrounding areas are particularly susceptible to flooding compared to other cities mainly due to the mainly clay-based soil that it's built upon.

"This type of soil isn't especially capable of draining water quickly," AccuWeather Meteorologist Maxwell Gawryla explained, as the soil leaves the opportunity for more standing water. The bayous can also play a role in flooding when heavy and widespread rain douses the area, the slow-moving bayous not allowing for quick drainage. 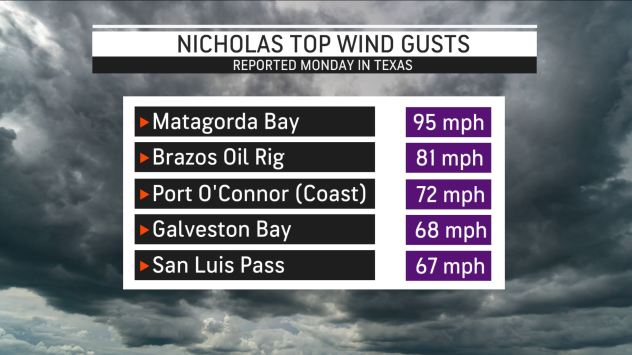 As with other tropical systems, strong winds combined with high-rising waters to pose additional dangers to residents. More than 200,000 Texans awoke without power early Tuesday morning, with at least 172,000 them in the Houston area, according to PowerOutage.US. And that number climbed by to above half of a million by late morning. By noon, local time, the number of customers without power across Texas had dropped below 500,000. Power crews continued to work Tuesday night, and just over 120,000 customers were still without electricity as of early Wednesday morning.

While Nicholas hit as a Category 1 hurricane with maximum sustained winds of 75 mph -- the threshold for Category 1 strength -- Matagorda Bay recorded gusts of up to 95 mph. The gusts were not constant, but the strength of these bursts was just under what would be considered Category 2 strength for a hurricane. 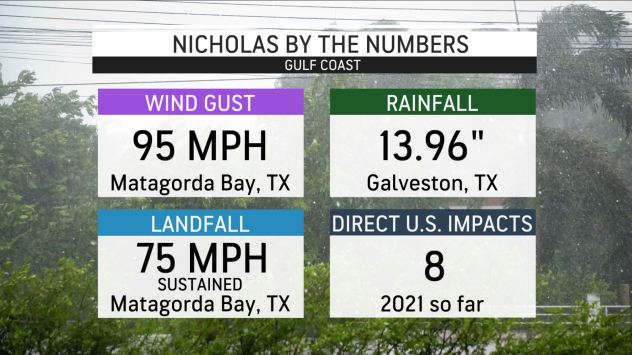 The canopy of one gas station in Matagorda buckled amid the strong winds, toppling sideways as one pillar still clung to its base.

As the day progressed Tuesday, Nicholas skirted to the northeast, barreling toward communities recently hit by Ida and others still recovering from last year's Hurricane Laura.

Entergy, an energy company that provides power across portions of the Gulf Coast, released a statement Tuesday morning that Nicholas could adversely affect their restoration operations from Hurricane Ida. Two weeks after the Category 4 hurricane hit Louisiana, the company had restored power to just over 90% of its total customers that had previously lost power from the hurricane. The company now estimates that power will be restored to the heaviest-damaged areas around Sept. 29.