Emerging tropical system could stick around for a while

Focus is shifting from Nicholas to the two looming worries in the Atlantic, one of which is nearby and could be named this week.

Less than a week after long-lived Larry tracked across almost the entirety of the Atlantic Ocean and finally dissipated near Greenland, AccuWeather forecasters say the next potential long-track tropical system is brewing near the African coast. Forecasters are tracking a series of tropical waves across the Atlantic basin, but one in particular has captured their attention.

A robust tropical wave that recently emerged off the coast of Africa is a strong candidate to become a tropical depression and eventually a tropical storm in the coming days. In the long term, there is potential for this system to track near the United States.

A large area of showers and thunderstorms can be found around this tropical wave, according to AccuWeather Senior Meteorologist Randy Adkins. 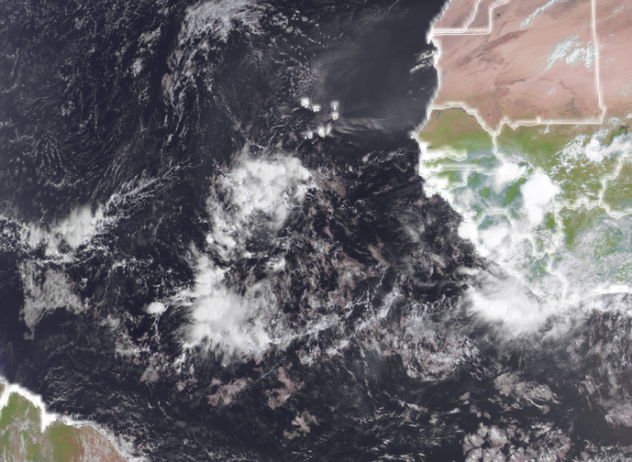 This tropical wave, designated as Invest 95L by the National Hurricane Center, will move into an area that forecasters say is favorable for development. Tropical systems typically need a combination of two atmospheric factors to develop and ultimately strengthen: low vertical wind shear and warm ocean waters.

Vertical wind shear is the change in direction and speed of winds at increasing heights, or levels, of the atmosphere. When strong wind shear is present over a portion of an ocean, it inhibits development. Strong wind shear can work to tear apart the cloud tops of a tropical system, resulting in the storm being unable to come together and intensify.

Warm ocean waters are also pivotal for the development of tropical systems. Typically, the "sweet spot" for tropical development is sea-surface temperatures of 78 degrees Fahrenheit or higher. Temperatures in the portion of the Atlantic where the tropical wave is headed are well into the 80s.

Given the relatively low wind shear and rather high sea-surface temperatures along the path of the next potential tropical entity of the season, AccuWeather forecasters expect new tropical development within the week. 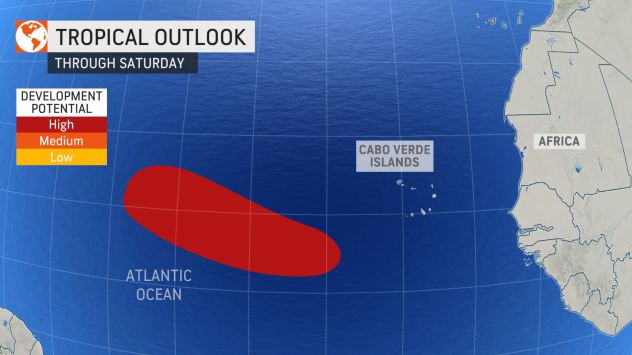 "There is a high chance this system will become a tropical depression, then [a] tropical storm within the next couple of days as it passes west-southwest of the Cabo Verde Islands," AccuWeather Senior Meteorologist and Hurricane Expert Dan Kottlowski said.

Forecasters say the best window for development will be before the end of the week as the tropical wave tracks westward across the open waters of the Atlantic.

"Conditions remain somewhat favorable through Thursday, and it is possible that this feature could become a tropical storm by that time," Adkins said.

Uncertainty still remains for the ultimate track of this potential tropical storm. On the whole, AccuWeather forecasters say two different scenarios for the track are in play.

"There is a fork in the road ahead for this system this weekend, especially on Sunday," AccuWeather Chief On-Air Meteorologist Bernie Rayno said.

A dip in the jet stream may or may not extend southward enough to pull the system northward over the central Atlantic, Rayno explained.

"If it misses that northward connection, then it will likely continue much farther to the west and could potentially affect the U.S. East Coast next weekend," Rayno said. 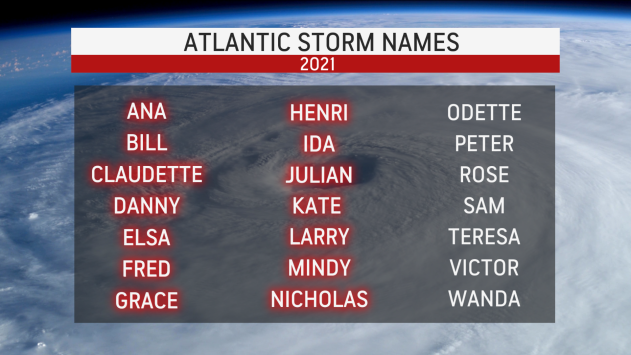 Forecasters say this tropical wave off Africa's coast may have competition to become the next named storm in the Atlantic basin. A disturbance of the southeastern coast of the United States also has a high chance for development by the end of the week.

The next two names on the list for the Atlantic basin are Odette and Peter.

The most recent name to be ticked off the list was Nicholas. Tropical Storm Nicholas formed Sunday morning in the southwestern Gulf of Mexico and strengthened Monday. Nicholas ultimately struck Texas Monday night as a Category 1 hurricane on the Saffir-Simpson Hurricane Wind Scale.