Larry could take a swipe at Bermuda as a major hurricane

The season’s fifth hurricane could become not only one of the season’s strongest storms but also one of the longest-lived named systems.

As Hurricane Larry continued to cruise unimpeded across the central Atlantic Ocean and gather strength on Friday, AccuWeather forecasters tracking the tropical system said the major hurricane was forecast to become a Category 4 on the Saffir-Simpson Wind Scale for hurricanes as soon as early Sunday.

Larry was packing maximum sustained winds of 125 mph on Saturday afternoon — up from 80 mph on Thursday evening and now a Category 3 hurricane. As of 6 a.m. EDT Sunday, it was located about 925 miles east of the Northern Leeward Islands as it moved to the northwest at 14 mph.

The storm is projected to remain over the open waters of the Atlantic for several more days, but it could eventually approach Bermuda and make a close pass to North America. 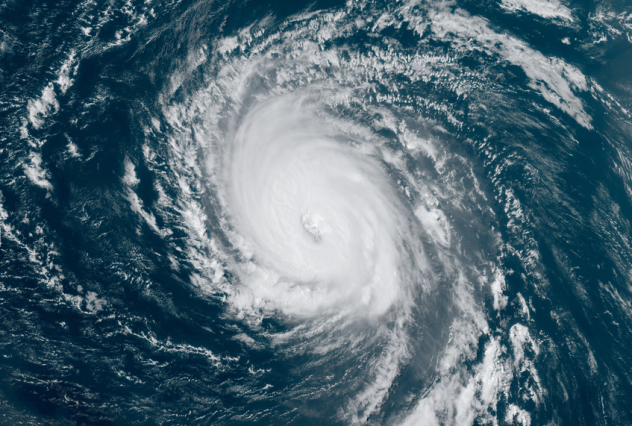 The storm will continue to track to the west-northwest on Sunday before making a turn to the north this week. This will put it on a path close to Bermuda around the middle to second half of the week.

The storm is currently forecast to reach Category 4 strength, according to AccuWeather meteorologists. A Category 4 hurricane has sustained winds between 130 and 156 mph. If Larry's sustained winds increase above 150 mph, it would become the strongest storm in the Atlantic this year, surpassing Hurricane Ida.

In addition to becoming the season's third major hurricane, behind Hurricane Grace and Hurricane Ida, it is possible that Larry may last well into the second week of September and become the longest-lived named system so far this season. It could last even longer than Elsa did earlier this season when it churned across the basin for nine calendar days spanning July 1 to 9. 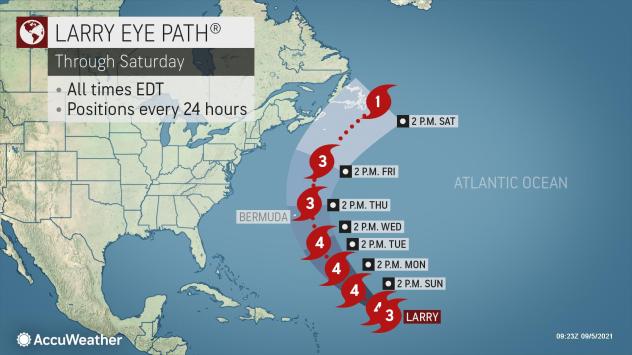 The path Larry may take beyond early this week includes the potential for multiple scenarios, and AccuWeather meteorologists are analyzing many factors to determine how the tropical system will behave. One of the factors being looked at is how the jet stream will be positioned over the eastern United States.

A dip in the jet stream is predicted to move into the Northeast this week. Depending on the exact positioning, strong winds aloft associated with the jet stream can keep tropical systems away from North America.

While this setup is expected to keep Larry away from the United States, it may take the storm on a course that would allow it to bring impacts to Bermuda and potentially Atlantic Canada.

Because of the pattern anticipated this week, there has been a westward trend in Larry's path. Should the westward shift continue for Larry's forecast track, the hurricane could bring more significant impacts to Bermuda, according to Adamson.

"There is certainly a chance that Larry tracks far enough to the west to pass close to or even over Bermuda, likely as a major hurricane," warned AccuWeather Senior Meteorologist Randy Adkins. "However, as it currently stands, it appears more likely than not that Larry will still end up far enough to the east to spare Bermuda the brunt of the storm." 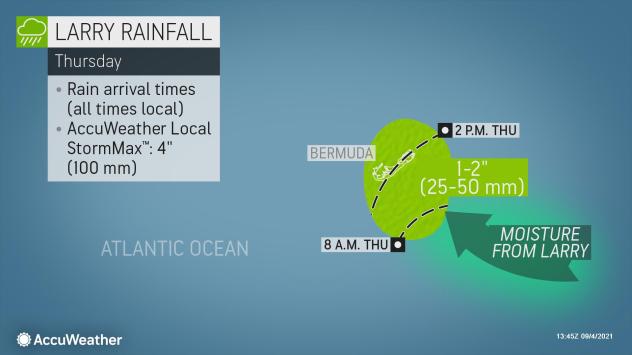 Current indications point toward bands of rain showers that could bring 1-2 inches of rainfall across Bermuda as the storm passes by to the east. Should the bulk of this rain come in just a few hours, some localized reports of flash flooding are possible.

Given that the worst of a storm's rain, wind and storm surge often occur on the northeastern side of a storm, the islands would avoid major impacts with a track farther to the east. Even still, wind gusts of 40-60 mph could reach the islands of Bermuda, with an AccuWeather Local StormMax™ of 70 mph is possible. 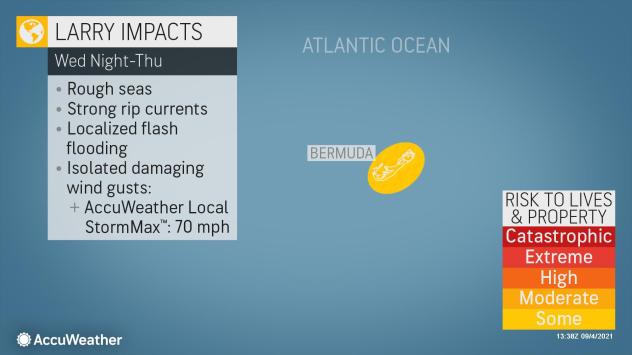 Residents and visitors are advised to prepare for rough seas and strong rip currents. Boating interests in the area, either recreational or commercial, should also be aware.

"After passing Bermuda, Larry is expected to turn northward to the east of the United States, but portions of Newfoundland will need to monitor Larry as impacts cannot be ruled out there," added Adamson.

Depending on exactly when Larry makes a turn to the north, the storm could bring impacts such as torrential rainfall and strong winds to Newfoundland, Canada, late this week or next weekend.

At this point, it is most likely that Larry will miss the United States and stay a few hundred miles away from the Northeast coast. However, large swells that will be generated by Larry's intense winds can affect much of the U.S. East Coast during the middle and end of this week. This can create dangerous conditions for boating and rip currents, the most significant of which may be found along the mid-Atlantic and Northeast coastline. Beachgoers should continue to monitor the situation and heed all warnings.

AccuWeather forecasters recommend that all interests in Bermuda, Atlantic Canada and even the northeastern U.S. closely monitor the progress of Larry over the week.

Hurricane How to help those impacted by Hurricane Ida

AccuWeather forecasters saw signs of Larry developing early on Monday as a robust tropical wave emerged from the coast of Africa. The system quickly became better organized from there. By 5 p.m. EDT Tuesday, it strengthened into Tropical Depression 12. Just 12 hours later, the tropical depression was upgraded to Tropical Storm Larry. The system spent 24 hours as a tropical storm before becoming Hurricane Larry early on Thursday morning.

Larry was not the only area of the basin being watched for trouble. "There are all kinds of skeletons in the closet," AccuWeather Hurricane Expert Dan Kottlowski said earlier this week while analyzing the copious potential for tropical storm development over the Atlantic basin in the coming days.

One area of concern is located over the western half of the Gulf of Mexico where a system could slowly take shape this week.

Kottlowski also noted that forecasters will be keeping a close eye on the waters near the Florida Peninsula, Georgia and the Carolinas early in the week. This zone will be near the tail end of a front that is forecast to stall over the region. If a low-pressure area can separate from this front, it is possible for a tropical system to develop.

With 12 named tropical storms -- and two major hurricanes -- already in the books for the Atlantic in 2021, the pace continues to run well ahead of average. Typically, the 12th named system or second major hurricane does not occur for another five weeks, or in early October. 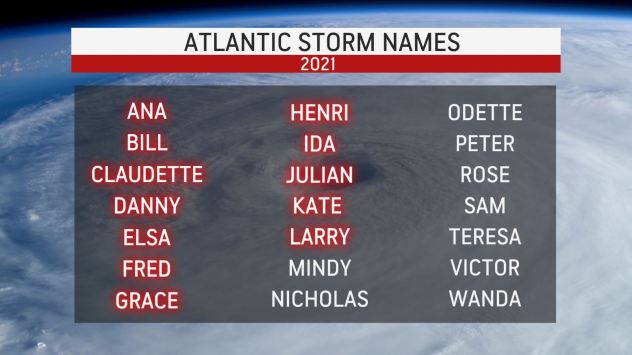 Following Category 3 Hurricane Grace in mid-August, Ida developed into the second major hurricane of the 2021 season last weekend and also became the first Category 4 hurricane of 2021.

As of Sept. 1, the 2021 hurricane season is within three storms of the record pace set during 2020, when 30 named systems formed and required the use of the Greek alphabet. In 2020, storms Nana and Omar had formed through the first day of September. With additional swarms of tropical activity anticipated in the coming weeks, it is possible for the 2021 Atlantic hurricane season to go neck and neck with the 2020 season for the duration.

The World Meteorological Organization (WMO) will no longer use the Greek alphabet to name systems beyond the original list of 21 names for the year. Instead, should this year's list of names be exhausted, there is a supplemental list that the National Hurricane Center (NHC) will use in alphabetical order. These names are Adria, Braylen, Caridad, Deshawn, Emery, Foster, Gemma, Heath, Isla, Jacobus, Kenzie, Lucio, Makayla, Nolan, Orlanda, Pax, Ronin, Sophie, Tayshaun, Viviana and Will.

AccuWeather is now projecting at least 20 named tropical systems with seven to 10 hurricanes and three to five major hurricanes. At least one more named system is forecast to have a direct impact on the U.S. with the potential for even more. Thus far, six named tropical systems have made landfall in the U.S. Four of those struck along the Gulf Coast, an area still reeling from last season's destruction.

There are plenty more named tropical systems to go for the 2021 Atlantic season as the peak of hurricane season continues through much of October. The season does not officially end until Nov. 30.