The Hurricane Hunters flew through the eye of Hurricane Ida on Aug. 29, as the storm approached the Louisiana coast.

Ida has become the first landfalling hurricane on United States soil in 2021, and AccuWeather forecasters, expecting extreme impacts for the Gulf Coast, have rated Ida a 4 on the AccuWeather RealImpact™ Scale for Hurricanes. 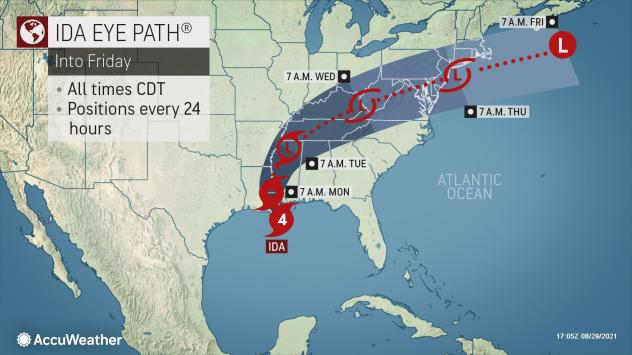 On Saturday afternoon, Ida began to rapidly intensify over the Gulf Coast, with wind speeds increasing from 85 mph to 105 mph, making the storm a Category 2 hurricane (maximum sustained winds of 96 to 110 mph) on the Saffir-Simpson Hurricane Wind Scale. Early on Sunday morning, Ida again strengthened into a major Category 3 hurricane, then quickly became a Category 4, packing 150 mph sustained winds at its peak on Sunday morning.

As of 12 p.m. CDT Sunday, the NHC said Ida's sustained winds were still reaching 150 mph, with gusts even higher and continue to move northwest at a speed of 13 mph.

"Preparations to protect life and property should be rushed to completion today in the warning area along the northern Gulf coast," the National Hurricane Center warned on Saturday. It added that the hurricane was expected to bring "life-threatening storm surge flooding, damaging winds and flash flooding" to potions of the Louisiana and Mississippi coastlines.

Louisiana Gov. John Bel Edwards declared a state of emergency Thursday due to the potential impacts from the hurricane. He also called on residents to heed the warnings.

Evacuations took place Saturday across parts of the Gulf Coast as officials around the region urged residents to make final preparations and heed warnings ahead of the life-threatening impacts posed by Hurricane Ida, which AccuWeather forecasters accurately predicted would roar ashore Sunday. 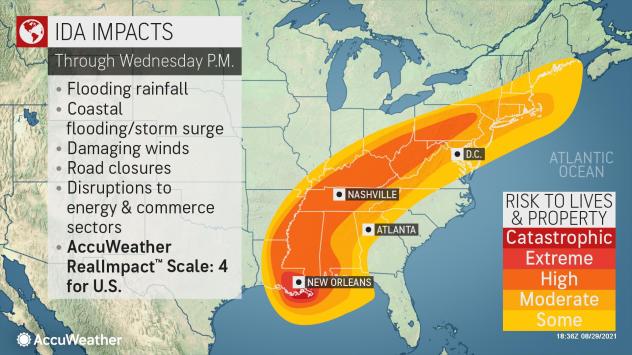 In New Orleans, many residents were already taking to the stores to stock up on food and supplies.

New Orleans Mayor Latoya Cantrell late Friday afternoon called for mandatory evacuations for areas outside the levee system. However, the National Weather Service (NWS) and Louisiana Gov. John Bel Edwards indicated that there was no time for even implementing contraflow, Cantrell said in an evening press conference on Friday.

"Therefore, the city cannot issue a mandatory evacuation because we don't have the time," Cantrell said, advising for residents to either voluntarily evacuate or hunker down.

Northwest of New Orleans, outside of Baton Rouge in the city of Baker, Mayor Darnell Waites issued an emergency declaration for the city with the approach of Ida. The declaration came Saturday morning as images from the Louisiana Department of Transportation and Development (DOTD) showed traffic clogging I-10 as people evacuated from coastal areas. Cars heading west were bumper-to-bumper on I-10 at the I-110 split near Baton Rouge. Meanwhile, traffic from New Orleans largely traveled northeastward to escape the projected path of the storm. 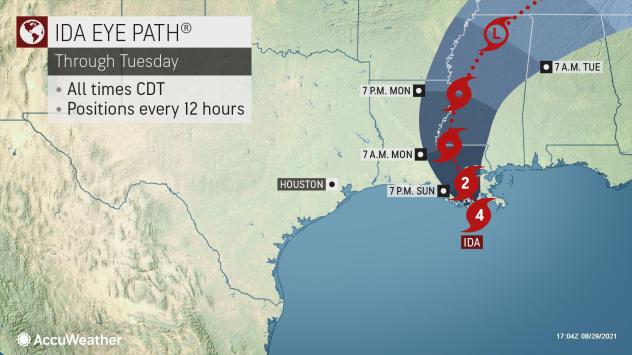 AccuWeather meteorologists correctly forecast that Ida to make landfall on Aug. 29, exactly 16 years to the day since Hurricane Katrina, a Category 3 storm, made landfall twice along the Gulf coast, resulting in widespread devastation.

So far this 2021 season, five named systems have reached land in the U.S., but none were hurricanes at the time of landfall. 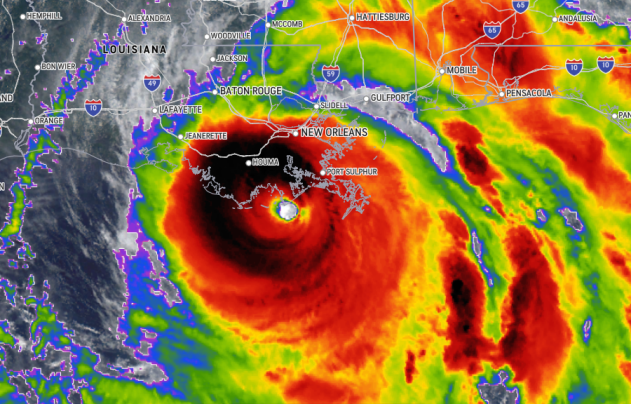 AccuWeather forecasters correctly predicted that Ida would become the first hurricane to make landfall this season, and did so as a Category 4 hurricane (sustained winds of 130 to 156 mph).

People along much of the Louisiana coast, including the city of New Orleans, as well as coastal areas of Mississippi, Alabama and the western portion of the Florida Panhandle should be prepared for significant and dangerous impacts from Ida. Some roads may become blocked by rising water, fallen trees and other debris as the hurricane approaches and moves inland. Widespread power outages are expected along the central Gulf Coast and Mississippi Delta regions.

Rough seas began to build outward from the south-central Gulf to much of the Gulf Coast and offshore waters on Saturday. 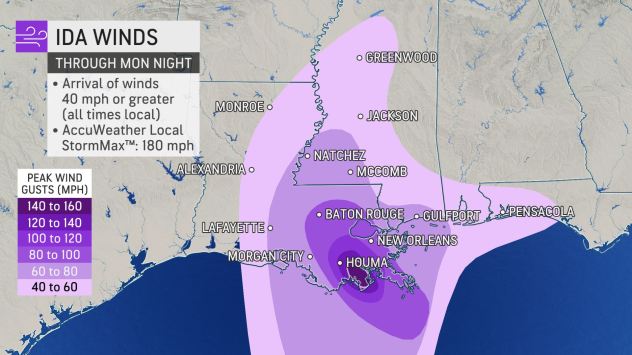 "Near Ida's center, wind gusts of 120-160 mph are possible and an AccuWeather Local StormMax™ of 180 mph is anticipated near landfall," AccuWeather Meteorologist Randy Adkins said. Hurricane-force wind gusts of 74 mph or greater are anticipated along much of the Louisiana and Mississippi coasts.

"The greatest impacts of a northward-moving hurricane will be felt not only near the eye, but also on the storm's northern and eastern side in general," AccuWeather Hurricane Expert Dan Kottlowski explained. For this reason, significant impacts in terms of storm-surge flooding, torrential rain, high winds and severe thunderstorms can occur well in advance of and well to the east of where the eye pushes inland.

Due to the expected size and power of Ida, Gulf of Mexico waters began to rise well ahead of the hurricane's landfall. Forecasters caution that bay, lake and bayou water levels will also continue to see storm surge effects through Monday. 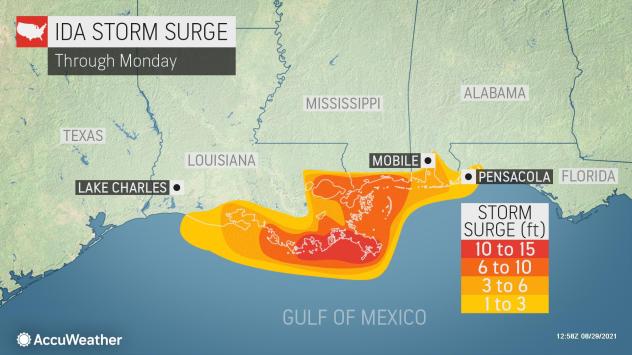 The heaviest rainfall, with a general 4-8 inches, is forecast to fall across much of Louisiana and Mississippi on northward into parts of Ohio, West Virginia and Pennsylvania. In central Louisiana and in parts of southeastern Louisiana, rainfall amounts can be even higher, with 8-12 inches and an AccuWeather Local StormMax™ of 24 inches projected. 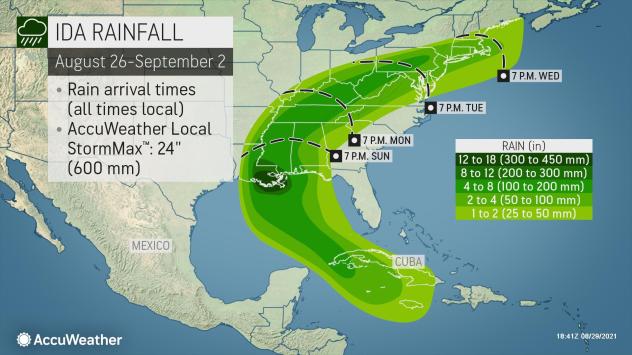 The widespread heavy, tropical rainfall is expected to threaten flooding across much of the eastern U.S. through the middle of the week.

There is the potential for tornadoes and waterspouts to be spawned near and east of the point of landfall into Sunday evening. This risk may continue near and east of the track of Ida as the system moves inland through Monday over the South Central and Southeastern states.

Louisiana was heavily targeted by direct strikes during the record 2020 Atlantic hurricane season. Tropical Storm Cristobal, Category 4 Hurricane Laura, Category 2 Hurricane Delta and Category 3 Hurricane Zeta all made landfall in the state, but Hurricane Marco had fallen below tropical depression status prior to moving ashore.

Back in early June, Tropical Storm Claudette impacted the U.S., but in an unusual meteorological twist, it was named a tropical storm by the NHC while it was over Louisiana, so it never made a traditional landfall. Through late August, four tropical storms -- Danny, Elsa, Fred and Henri -- have made landfall on U.S. soil this year.