The first hurricane of the 2021 Atlantic season is expected to maintain hurricane strength while approaching Hispaniola and Jamaica this weekend.

Hurricane Elsa formed over the waters of the Atlantic Ocean early Friday just west of the Caribbean island of Barbados, one day after the system became the fifth-named storm of 2021. AccuWeather forecasters, having expected the cyclone to reach hurricane force, continued monitoring Elsa and predict it will approach the United States next week after it unleashes heavy rain, strong winds and stirs up dangerous seas around the Caribbean islands through this weekend.

Elsa was bringing hurricane conditions to the Windward Islands as it raced to the west-northwest at a speed of 29 mph Friday morning. The center of Elsa was passing near the islands of St. Vincent and St Lucia as of 11 a.m. EDT and the storm was about 675 miles east-southeast of Santo Domingo, the capital city of the Dominican Republic.

The system is expected to continue on a general west-northwest path over the Caribbean and is likely to remain a hurricane while approaching Hispaniola and Jamaica this weekend. 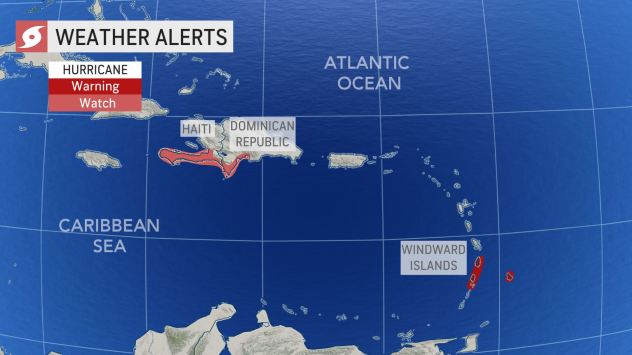 A hurricane warning is in effect for Barbados, St. Vincent and the Grenadines, as well as St. Lucia, the National Hurricane Center (NHC) said. A sustained wind of 74 mph and a gust up to 86 mph has already been reported on Barbados, the NHC said.

A hurricane watch is in effect for southern Haiti from Port Au Prince to the southern border with the Dominican Republic. 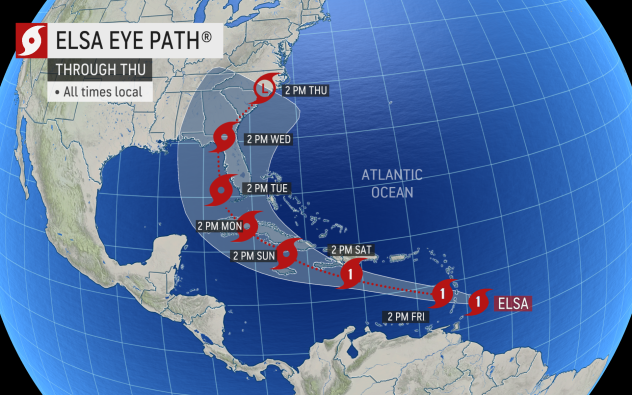 Elsa developed into a tropical storm about halfway between the Leeward Islands and the coast of Africa early Thursday morning, setting a new Atlantic record in the process. With its formation early in the morning of July 1, Elsa dethroned 2020's Tropical Storm Edouard as the earliest E-named storm in the Atlantic basin. Edouard formed July 6, 2020. The 2020 season went on to produce a record 30 named storms.

Conditions are expected to deteriorate over a large portion of the Windward Islands and the southern portion of the Leeward Islands on Friday with increasing rounds of downpours, thunderstorms, gusty winds with rough seas and surf, AccuWeather Senior Meteorologist Adam Douty said.

"During Friday and Friday night, the heaviest rainfall totals of 2-4 inches with an AccuWeather Local StormMax™ of 8 inches will occur across the Windward Islands. Wind gusts of 60-70 mph with an AccuWeather Local StormMax™ of 90 mph will occur near the track of the storm -- likely across Barbados, Saint Vincent and Saint Lucia," Douty explained. Power outages and flash flooding are anticipated. 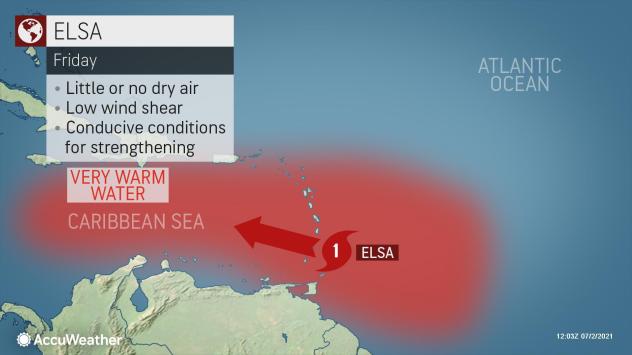 As Elsa is forecast to maintain a steady west to northwest path through the eastern and then the central Caribbean this weekend, most of the impacts are likely to pass south of the U.S. and British Virgin Islands with minimal impact along the southern shoreline of Puerto Rico. These areas could face rough seas and surf and the possibility of drenching showers and thunderstorms from the storm's outer bands.

However, this general, slightly north-of-west, track will bring the system very close to the islands of Hispaniola, Jamaica and Cuba as the weekend progresses with the likelihood of much more significant, damaging and dangerous impacts to these islands.

AccuWeather is anticipating that the RealImpact™ Scale for Hurricanes will be a 1 in the Caribbean. The RealImpact™ is a 6-point scale with ratings of less than one and 1 to 5. The rating is based on the anticipated isolated flooding, damaging winds, storm surge and a number of other economic factors. 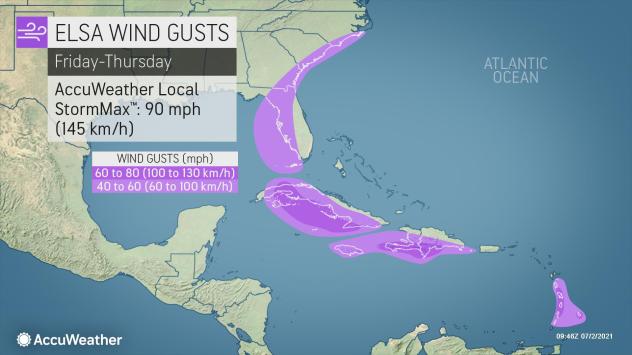 As Elsa strengthens and the forward speed of the storm slows, the output of rain and wind will increase. Since Elsa is forecast to approach and potentially track over parts of Hispaniola and Cuba as a hurricane, the impacts may be more significant compared to those experienced in the Windward Islands. Should Elsa strengthen more than currently anticipated prior to reaching the waters of Hispaniola and Cuba, the RealImpact™ rating could increase as well.

It is in this north-central portion of the Caribbean where the track becomes somewhat less certain. The track of Elsa is likely to be influenced by the strength of the tropical system itself as well as other non-tropical weather players, including the jet stream near North America, an area of high pressure over the western Atlantic and fronts that may stall over the southeastern U.S. later this weekend into next week.

If Elsa moves over one or both of the large, mountainous islands of Hispaniola and Cuba, then the system will likely weaken. Should it track in between or south of these islands, then Elsa could maintain strength or even strengthen further. Waters are sufficiently warm to maintain and feed a tropical system throughout the Caribbean. However, AccuWeather forecasters point out that other inhibiting factors, such as wind shear or a flow of dry air from South America, could keep Elsa's strength in check or cause it to weaken.

If Elsa manages to slide south of these Caribbean islands and enter the Gulf of Mexico largely unscathed, a more potent hurricane could evolve and potentially impact the U.S. A track into the eastern Gulf of Mexico appears most likely at this time, according to AccuWeather forecasters. 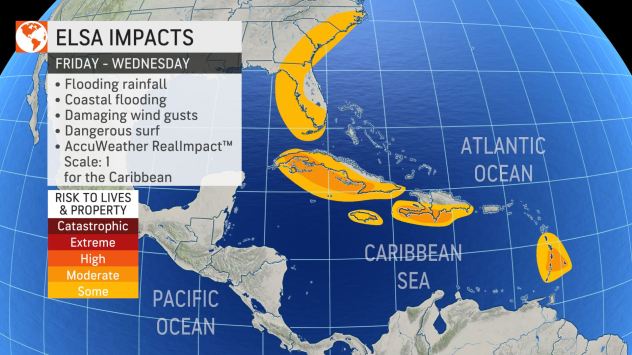 Even if Elsa's strength fluctuates, it does not necessarily mean it will dissipate entirely. Tropical systems that struggle for a time due to wind shear, dry air and land interaction can rebound days later.

"Depending on the exact track, winds over parts of Hispaniola and Cuba may gust to over hurricane force (74-mph or greater maximum sustained winds) on the Saffir-Simpson Hurricane Wind Scale," Douty said. Winds this strong can lead to widespread power outages. Torrential rain can lead to flash flooding and mudslides, especially in areas where there is deforestation.

Beyond that, there is still some uncertainty about where Elsa will head. Even though a track into the eastern Gulf is most likely, it could potentially track northward over the Florida Peninsula -- or even just to the east of the Sunshine State.

Residents of the southeastern U.S. as well as those farther north along the Atlantic coast in the U.S. are being put on alert for potential impacts from Elsa. 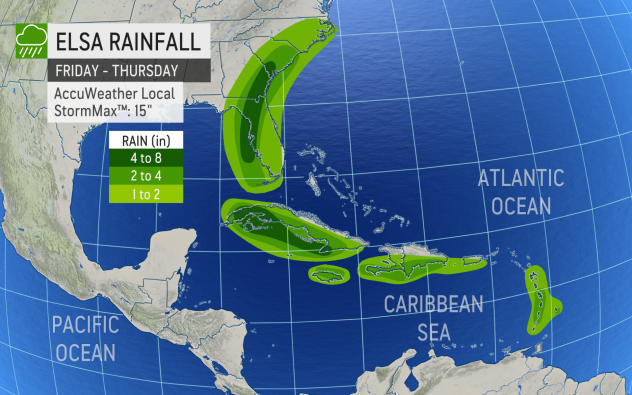 "Impacts to the contiguous United States would begin Monday night at the earliest after the system passes through the Caribbean. Residents, visitors or those with interests from the central Gulf Coast, across Florida and to the Carolina coast should monitor the progress of Elsa," Douty said.

Even though the exact track for Elsa from late this weekend to next week is far from certain, there is the likelihood that some rain, building seas and gusty thunderstorms are likely to spread northward over the Florida Peninsula early next week, either by direct or indirect means. How significant these conditions become could mark an end to search and recovery operations following the collapse of the Surfside condominium building near Miami.

The AccuWeather Local StormMax™ for rainfall in Cuba and Florida from late in the weekend into next week is 15 inches. Where the heaviest rain pours down will depend on the exact track of Elsa, but significant rain, on the order of several inches, can occur well away from the center of the storm.

"Significant impacts may not only be from flooding rainfall, but perhaps also strong winds, high waves and storm surge flooding in the U.S.," Douty said.

AccuWeather forecasters have been monitoring the feature that became Elsa for more than a week. It was initially dubbed invest 97L by the NHC. It was upgraded to Potential Tropical Cyclone Five (PTC 5) around 5 p.m. EDT Wednesday before the NHC called it Tropical Depression Five later Wednesday evening.

The busy start to the 2021 Atlantic hurricane season has some meteorologists comparing it to the 2020 season, and some have pointed out a troubling trend happening so far this season.