The Atlantic Canada coast was slammed with life-threatening flooding and hurricane-force wind gusts into Saturday morning as Fiona knocked out power to more than half a million.

After menacing Puerto Rico, the Dominican Republic, the Turks and Caicos and other parts of the Caribbean, Fiona collided with Atlantic Canada, becoming one of the strongest storms on record to impact the easternmost portions of Canada, according to AccuWeather forecasters and weather data from the region.

On Friday, Fiona began bombarding Prince Edward Island, eastern Nova Scotia, western Newfoundland and southeastern Labrador with life-threatening flooding, damaging hurricane-force wind gusts and dangerous storm surges. One dispatcher stated that the conditions facing Prince Edward Island were "like nothing we've ever seen," with reports made of downed trees and wires across the area.

Chaos continued Saturday morning in southwestern Newfoundland, with at least one building washed away due to the storm in Port aux Basques, and several others being damaged by tides approaching residences in the area. Some residents fled parts of the community impacted by flooding while washed out roads cut off the town completely from certain sectors.

AccuWeather Wind Flow map shows Fiona as it spins off the coast of Canada. Fiona made landfall in the region Friday evening.

A scary scene in the community also unfolded Saturday morning, as residents could see what appeared to be a large quantity of gasoline on the streets.

All low lying and waterfront streets were under mandatory evacuation as of 8 a.m. EDT Saturday in Port aux Basques, as issued by the local fire department.

In an interview Saturday morning with CBC Radio One, Port aux Basques town manager Leon MacIsaac stated that he had previously warned locals about Fiona's potential impacts to the community.

"Due to the most recent forecast and likelihood that the sea is going to be much higher than we originally anticipated, we thought it would be prudent to contact as many residents as we could near the south-facing coast," MacIsaac said.

The Canadian Hurricane Center warned that the storm could potentially evolve into "a landmark weather event" for Eastern Canada this weekend.

“This could be the storm of a lifetime for some people,” AccuWeather Chief Meteorologist Jonathan Porter said Thursday.

By midday Friday, Fiona had regained Category 4 strength on the Saffir-Simpson Hurricane Wind Scale, with sustained winds back up to 130 mph (215 km/h) before losing wind intensity and becoming Category 3 storm with 125 mph sustained winds. As it entered colder waters, the storm lost tropical characteristics Friday night, however its rain and wind impacts to Atlantic Canada remained unchanged.

Early Saturday morning, Fiona finally made landfall along Nova Scotia's Canso Peninsula with sustained winds of up to 100 mph, the equivalent of a Category 2 hurricane, with the gusts recorded by a bevy of locals in the region.

As of 11 a.m. EDT Saturday, Fiona continued to move northward at a brisk pace with a forward speed of 25 mph. Although Fiona remained non-tropical, it continued to pack sustained wind speeds of 80 mph (130 km/h), equivalent to a Category 1 hurricane on the Saffir-Simpson Hurricane Wind Scale. 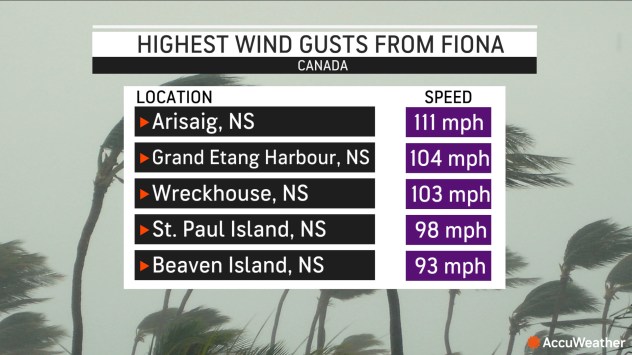 Fiona is expected to continue moving quickly northward through Atlantic Canada, bringing damaging winds, flooding rain and coastal flooding. Satellite imagery on Saturday showed that Fiona was a massive storm with hurricane-force winds extending outward about 115 miles (185 km) from the center of the storm and tropical-storm-force winds extending 405 miles (605 km).

"Fiona will likely be the most intense storm on record, when taking into account the central pressure and the magnitude of wind gusts that are expected to strike eastern Nova Scotia through this weekend," said AccuWeather Senior Meteorologist Brett Anderson, who routinely issues weather forecasts for Canada.

An unconfirmed report from Hart Island, Nova Scotia, recorded the lowest air pressure in Canadian history. If confirmed, this report would certainly be momentous and would show how unusually powerful Fiona managed to become. 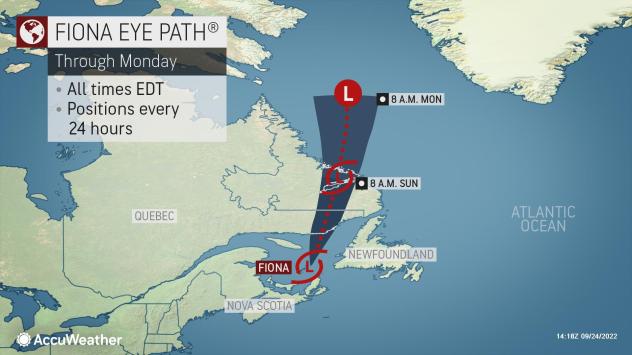 In 2019, Hurricane Dorian brought significant damage to Nova Scotia as a Category 1 storm on the Saffir-Simpson Hurricane Wind Scale and was in the process of losing wind intensity when it made landfall along the south coast of Nova Scotia. Winds gusted as high as 96 mph (155 km/h) along the coast, with widespread damage to structures and trees. More than about 500,000 people in the region lost power.

Dorian also made landfall over a more populated area, whereas Fiona made landfall in an area that is sparsely-populated. However, Fiona is larger and stronger than Dorian and will continue to bring severe impacts to the region that could be worse than Dorian's in 2019. 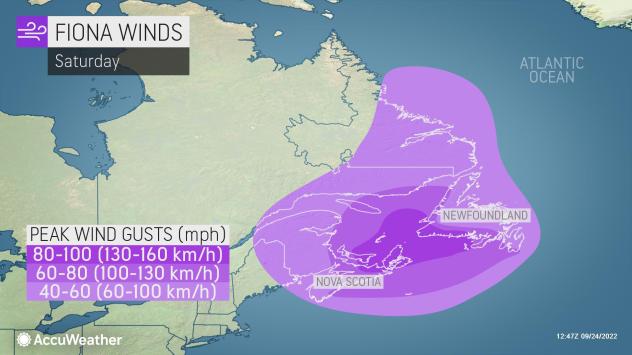 "Fiona will bring widespread power outages due to high winds, flooding due to torrential rain and isolated storm surge and massive seas offshore and in the Gulf of St. Lawrence," Anderson added.

Widespread heavy downpours of 4-8 inches (100-200 mm) could occur across northern Nova Scotia and southwestern Newfoundland, with an AccuWeather Local StormMax™ of 13 inches (330 mm) of rainfall possible. Rainfall of that magnitude could lead to substantial flooding, AccuWeather experts said, and although the storm is expected to move quickly through the region, if the storm were to slow down at all, it could lead to higher local rainfall totals. 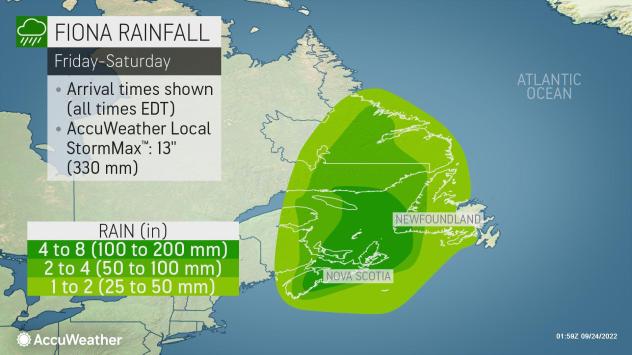 Flooding in any urban areas or along roads could be exacerbated by falling leaves that may be clogging storm drains, resulting in severe ponding on roadways.

"Fiona is expected to cause significant loss of leaves, which will probably have a major negative impact on the fall color in October," Anderson explained.

Also, with the heavy rainfall and intense wind gusts, many uprooted trees and snapped tree limbs are anticipated in the region and could cause widespread power outages north of Halifax, Nova Scotia and southwest of St. John's, Newfoundland.

The combination of anticipated flooding rainfall, destructive winds, dangerous seas, widespread power outages and the historical context means that Fiona is a 3 on the AccuWeather RealImpact™ Scale for Hurricanes.

"Wave heights may reach 50 feet just offshore Cape Breton with significant coastal inundation into many harbors and inlets, which will damage boats and property," Anderson said.

Fiona has already generated some towering waves as it churned across the Atlantic this week. A Saildrone device that was deployed into the ocean to measure wave heights and other weather data related to Fiona reported waves to 47 feet on Thursday as the storm tracked over the open Atlantic.

With progressively colder waters prevalent over the North Atlantic, due to the icy Labrador current, powerful hurricanes often quickly lose their punch or transform into tropical wind and rainstorms.

But this year, water temperatures have been running 10-20 degrees Fahrenheit (6-11 C) higher than average over the North Atlantic, especially just south of Atlantic Canada, and those warmer-than-usual waters may result in less weakening of the hurricane or a slower transformation to a rainstorm. Water temperatures range from near 60 F (16 C) near the coast of Nova Scotia to 84 F (29 C) off the southeast coast of New England. 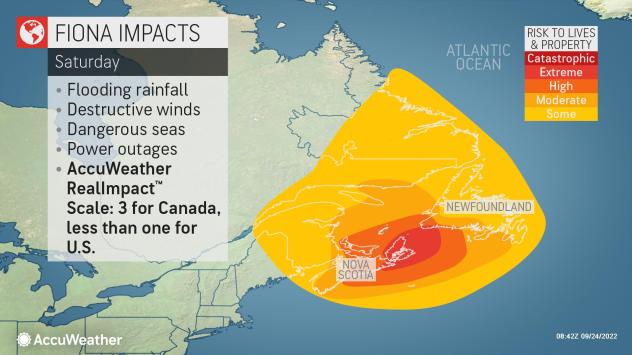 The Atlantic hurricane season, which was off to a notably slow start during its first half, has roared back to life during the month of September – and that is in no small part due to the power and longevity of Hurricane Fiona. Meteorologists gauge the overall intensity of a hurricane season using a metric known as ACE, or the accumulated cyclone energy of each named storm in a hurricane season.

Many across Puerto Rico, Dominican Republic still have no power, water