Tropical Depression Nine developed in the central Caribbean on Friday morning, and it could become the next named tropical storm of the 2022 Atlantic hurricane season later on Friday or Saturday morning. It is likely to become the first threat from a major hurricane to the United States this season after it makes the trek from the Caribbean into the eastern Gulf of Mexico, putting Florida in harm’s way, AccuWeather meteorologists warn.

AccuWeather's tropical forecast team, which began cautioning about the looming threat earlier this week, is growing increasingly concerned about the potential for a damaging strike from a hurricane in what has so far been a largely uneventful hurricane season for the U.S.

The tropical feature remained disorganized on Thursday due to its proximity to South America and strong disruptive winds in the atmosphere around it. However, once it reached the warmer waters of the Central Caribbean and began to drift away from South America, it was upgraded to a tropical depression early Friday morning. AccuWeather forecasters say that Tropical Depression Nine is likely to reach tropical storm strength by Friday evening. The next name on the list for the 2022 season is Hermine.

A couple of other disturbances over the eastern Atlantic could compete with the next name on the list. Following Hermine are Ian and Julia this year. 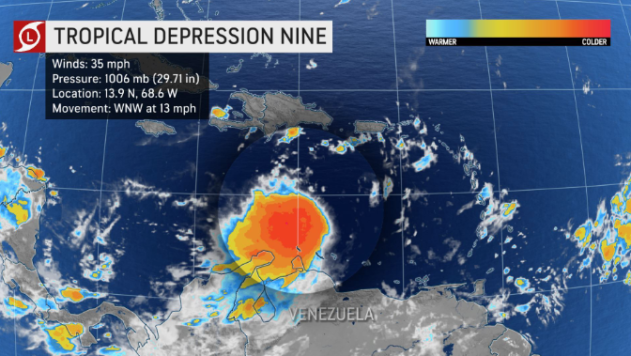 On Tuesday, meteorologists at AccuWeather dubbed the system a tropical rainstorm and began to issue its own track and impact maps. "It is our mission as a weather forecasting company to get the word out as far in advance as possible of any potential major impacts," AccuWeather Chief Meteorologist Jon Porter said.

AccuWeather's team of dozens of meteorologists with decades of experience continue to believe the system poses a serious threat to lives and property, not only in the western Caribbean into early next week but also to the U.S. from the last days of September to the first several days of October. After the storm slams into western Cuba, Florida could be the next target.

"This poses the first threat by a potentially major hurricane to the U.S. this year and because of the quiet nature of the 2022 season until the past week or so, we are concerned that people may take the threat too lightly," Porter said. 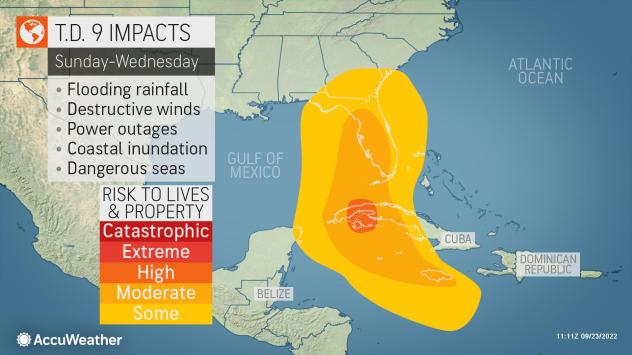 The northern coast of Venezuela and Colombia as well as the ABC islands of Aruba, Bonaire and Curacao will feel the impact of the extensive and westward-moving tropical feature in the form of drenching showers and gusty thunderstorms with locally rough seas into Saturday. Some of these areas may experience flash flooding as well as mudslides in hilly terrain.

As the feature turns a bit more to the northwest this weekend, it will move over the open, bathlike waters of the central and western Caribbean Sea. Disruptive winds are also expected to drop off in the system's path. Factoring in these conditions, organization and strengthening are then likely to take place at a swift pace, forecasters warn.

"It is highly possible that this system could ramp up from a tropical storm to a Category 1 or 2 hurricane in less than a couple of days from this weekend to early next week," AccuWeather Lead Long-Range Meteorologist Paul Pastelok said. For this reason, interests from Jamaica and Cuba to the Cayman Islands are being urged to closely monitor the storm's progress. Conditions may deteriorate rapidly in terms of heavy rain and strong winds as well as dangerous seas. 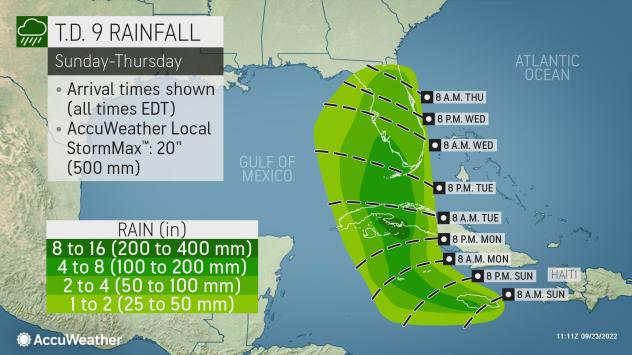 At this time, the projected path of the storm will bring a general 8-16 inches (200-400 mm) of rain to western Cuba with an AccuWeather Local StormMax™ of 20 inches (500 mm) from Monday night to Wednesday. Rainfall of this magnitude can lead to life-threatening flooding and mudslides.

Should the center of the storm manage to avoid the large land areas of Cuba and southeastern Mexico by passing through the Yucatan Channel, there is the potential for additional strengthening during the middle and latter part of next week over the open waters of the Gulf of Mexico.

AccuWeather meteorologists project the storm to intensify into a Category 3 hurricane or stronger with winds greater than 111 mph, should the system reach the Gulf of Mexico. 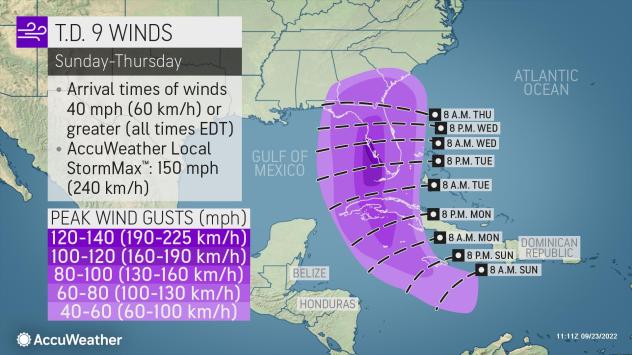 Given the storm's current projected path and intensity, AccuWeather meteorologists are warning of the likelihood of winds reaching or exceeding 100 mph (160 km/h) with a StormMax™ of 150 mph (240 km/h) in western Cuba from Monday night to Wednesday. At this strength, widespread power outages and major property damage can occur.

Water temperatures are generally in the lower to mid-80s F throughout the Caribbean, and there are pockets from the western Caribbean to the eastern Gulf of Mexico and the Florida Straits where water temperatures are in the upper 80s to near 90, which is plenty warm enough to support explosive growth into an intense hurricane. 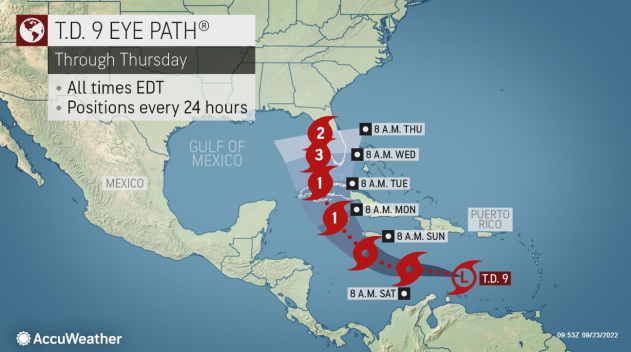 The track of the storm is subject to change and may be influenced by how quickly the storm strengthens. If the system remains weak for longer, then it may have a greater chance of pushing onshore in southeastern Mexico. A more likely scenario is for the system to ramp up quickly, making it more likely to take a northerly track across Cuba early next week, then to the Florida Straits and near the Florida Keys and Peninsula during the middle part of next week.

"Should the system get into the Gulf of Mexico, which appears to be one of the more likely scenarios at this time, areas from the Florida Peninsula to the Florida Panhandle will be at risk for a direct strike by a strong hurricane," AccuWeather Chief On-Air Meteorologist Bernie Rayno said.

Systems that move into the central Gulf of Mexico in late September and October rarely track westward and hit Texas. This is due to increasing west-to-east steering winds this time of the year around the Gulf and the southern U.S. These same conditions are likely to cause the storm to be steered more to the east, rather than to the west and pulled toward the Florida west coast as a result.

AccuWeather meteorologists say that if the storm moves northward or northeastward across the Gulf of Mexico, impacting the Gulf Coast of the U.S., then it could later take a track along the East Coast of the U.S. during the first week of October.

AccuWeather forecasters are urging all residents, vacationers and workers from the U.S. Gulf Coast to the Eastern Seaboard to keep close tabs on the forecast for this system in the days ahead given the potential for a powerful hurricane to develop. Residents across southern Florida in particular should keep a close eye on this developing system.

Ian a shadow of its once-powerful self, but still making a rainy mess from Kentucky to New Hampshire