Many across Puerto Rico, Dominican Republic still have no power or running water as Fiona churns toward Bermuda

Thousands of people lack or have intermittent water service, while on the relief front, President Biden approved a major disaster declaration for the U.S. territory, allowing residents to access emergency funds. 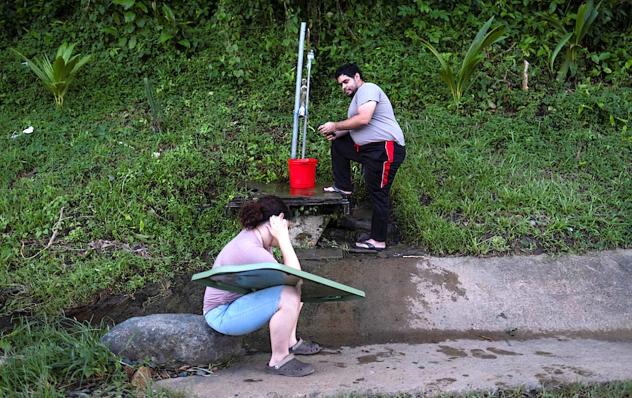 A man collects spring water on Sept. 21 at a mountain next to a highway in the aftermath of Hurricane Fiona in Cayey, Puerto Rico. (CNN)

(CNN) -- More than a million people in Puerto Rico and the Dominican Republic are waking up without power or running water again Thursday as crews work to repair critical utilities disabled by Hurricane Fiona -- now a Category 4 monster heading toward Bermuda.

The first major hurricane of this year's Atlantic season has killed at least five people across the Caribbean: one in Guadeloupe, two in Puerto Rico and two in the Dominican Republic.

"This was something incredible that we've never seen before," Ramona Santana in Higüey, Dominican Republic, told CNN en Español. "We're in the streets with nothing, no food, no shoes, clothes, just what's on your back. ... We don't have anything. We have God, and the hope help will come."

Now packing sustained winds of 130 mph, the center of Fiona is due to pass just west of Bermuda early Friday, with conditions starting to deteriorate Thursday, said CNN Meteorologist Robert Shackelford. The island nation is under a hurricane warning; Americans are warned not to travel there, and relatives of US government personnel may leave, the State Department said.

"The National Hurricane Center is certain that Bermuda will experience tropical-storm-force winds," Shackelford said. "Once Fiona passes by Bermuda, the storm is forecast to impact Nova Scotia by Saturday afternoon."

In the Canadian province, residents should prepare for tropical storm-like or even hurricane-like conditions starting as early as Friday evening by securing outdoor items, trimming trees, charging cell phones and creating an emergency kit, said Jason Mew, director of the emergency management office. Shelters will be open for those experiencing homelessness and anyone else in need, he said.

Meantime, a developing storm poised to be named Hermine could become a monstrous threat to the US Gulf Coast by next week, now forecast models show.

In Puerto Rico, where Fiona delivered flooding rains and an islandwide blackout as it made landfall Sunday, more than 450,000 people lacked or had intermittent water service, and 1 million homes and businesses were still without power Wednesday, according to the government's emergency portal system.

In the Dominican Republic, where Fiona moved onto land early Monday, more than a million customers had no running water and nearly 350,000 homes and businesses were dark Wednesday, said Maj. Gen. Juan Méndez García, director of the country's emergency operations center.

More than 600 homes were destroyed, and some communities were cut off from aid, he said.

As Fiona hit the Dominican Republic in the middle of the night, Iverice Viera rushed in waist-deep floodwater to wake up her neighbors in Higüey, she said.

She's now trying to dry out her belongings.

"The rooms are empty. I had to throw away a lot. There's no electricity or water to wash anything," Viera told CNN en Español.

Puerto Rico Before and After Hurricane Fiona Flooding

Puerto Rico, meantime, was making some progress on the relief front: President Joe Biden on Wednesday approved a major disaster declaration for the US territory, FEMA said. The move allows residents to access grants for temporary housing and home repairs as well as low-interest loans to cover uninsured property losses.

"This ensures that our people will have access to additional help from FEMA to recover from the damage caused by this event," Puerto Rico Gov. Pedro Pierluisi said in a tweet. 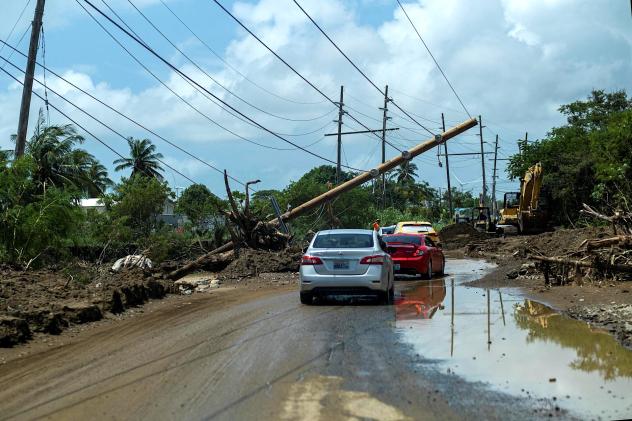 More than a million people in Puerto Rico and the Dominican Republic are waking up without power or running water again on Sept. 22 as crews work to repair critical utilities disabled by Hurricane Fiona. (CNN)

Across the island, more than 800 people were housed Wednesday in dozens of shelters, according to Puerto Rico's housing secretary, William Rodriguez.

Fiona also menaced parts of the Turks and Caicos on Tuesday, and many areas of the British territory were still without power Wednesday, namely on Grand Turk, South Caicos, Salt Cay, North Caicos and Middle Caicos, said Anya Williams, acting governor of the islands.

Officials there were relieved no one was killed in the storm, they said as they began visiting islands and making repairs.

Major hurricane threat looms for the US next week
Hurricane Fiona could be ‘most intense storm on record’ to slam into Atlantic Canada
Right on cue: Cold front to sweep away summer weather as fall arrives
Historians pinpoint the very 'worst year' ever to be alive