Right on cue: Cold front to sweep away summer weather as fall arrives

AccuWeather forecasters say Mother Nature still has a few tricks up her sleeve for the northeastern United States as summer transitions to fall this week.

The autumnal equinox on Thursday at 9:03 p.m. EDT marks the official start of astronomical fall across the Northern Hemisphere. As the new season gets underway, a dramatic change in the weather is forecast to unfold in the parts of the Midwest and Northeast.

Out ahead of the cold front, air more comparable to August was in place Wednesday across the northeastern U.S., while behind the cold front the air headed for the region was more akin to mid- to late October.

The cold front that set off thunderstorms Wednesday and Wednesday night will continue to push eastward Thursday. Shower and thunderstorm activity will also spread farther east and reach portions of New England and the Atlantic coast, according to AccuWeather meteorologists.

Any precipitation can make for a gloomy Thursday evening across the Northeast and mid-Atlantic, but the most notable change will certainly be the temperature. High temperatures from Thursday were generally 15-25 degrees F lower than Wednesday's highs. 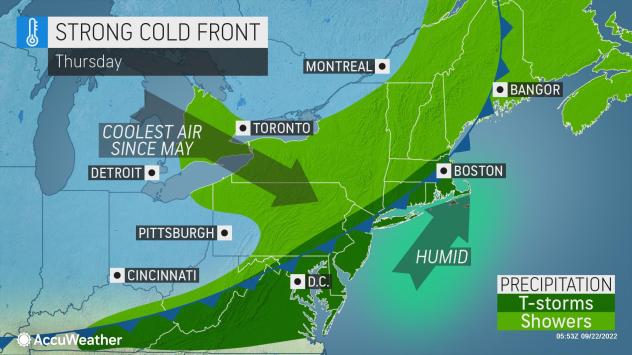 Once Friday arrives and the cold front moves out to sea, even chillier conditions will settle in for the first full day of fall.

"The air mass that moves in behind this cold front on Friday and Friday night will be the coolest that this region has experienced since the second week of May," AccuWeather Senior Meteorologist Dave Dombek said.

Highs in the 50s and low 60s are expected across much of the Northeast Friday. In Boston, for example, the mercury is only forecast to climb into the upper 50s Friday. The last time Beantown had a high temperature that failed to reach 60 degrees was back on May 10, when the city maxed out at 58. An average high for this time of the year there is around 70 F. 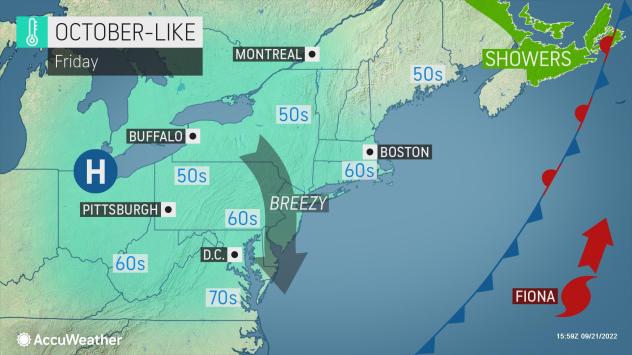 In addition to chillier air, humidity levels will also plummet across the northeastern U.S., giving many across the area a first true taste of fall.

Although the change in overall weather is going to feel dramatic by the end of the week, it is unlikely to break records.

"The temperatures that we expect [on Friday] really will not be terribly out of the ordinary for this time of year," Dombek added. "In general, this will be a very refreshing change to fall weather for most folks."

The cold front sweeping across the Northeast to end the week will also serve another purpose: keeping Hurricane Fiona away from the U.S.

"The same push of cool air and the associated large southward dip in the jet stream will work together to keep the already dangerous and destructive Hurricane Fiona at sea," Sosnowski explained.

Fiona unleashed feet of rain, massive flooding, widespread power outages and property damage after making landfall in Puerto Rico and then slamming into the Dominican Republic this past weekend. Although Fiona will remain several hundred miles to the east of the U.S., the hurricane will stir large waves all the way to the East Coast.

"Large swells, pounding surf and dangerous rip currents are expected up and down the Eastern Seaboard from mid- to late week. People heading to the beaches for a late-summer and early-fall getaway may not be able to go in the water," Sosnowski added. After passing dangerously close to Bermuda Thursday, Fiona will slam head-on into Newfoundland, Canada, this weekend.