Nearing the midway point of hurricane season, the Atlantic basin is poised to finish a historically quiet August. But as September arrives, there is plenty that AccuWeather forecasters are monitoring.

The Atlantic Ocean has been void of tropical systems since early July, and the basin is on the verge of historic inactivity for the month of August. But AccuWeather meteorologists say that the tropics may soon come alive as they are tracking a few different areas for potential tropical development by early September.

At least two out of the three of the areas that AccuWeather meteorologists are monitoring closely for development in the tropics in the coming days could pose a threat to land, including the United States and/or its territories, AccuWeather forecasters warn.

Conditions are changing in the tropical Atlantic. In the past week, tropical disturbances, also known as tropical waves, that move westward from Africa have shown more vigor, and an area of stiff breezes, which forecasters refer to as strong wind shear, has prevented development during much of the summer has been wavering in part of the basin. 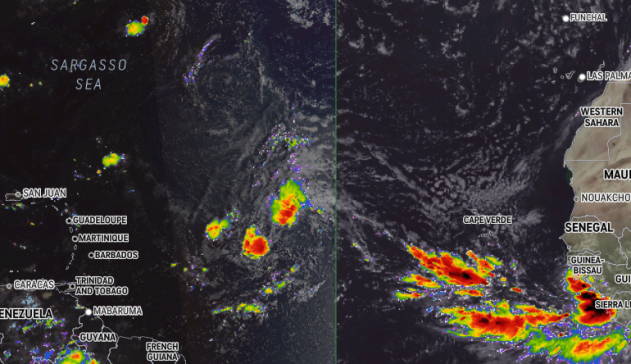 In this image captured on Friday, Aug. 26, 2022, clusters of clouds associated with tropical disturbances were noted over the central Atlantic (left of center) and near the coast of Africa (right of center). (AccuWeather Enhanced RealVue™ satellite)

Similarly, vast stretches of dry air over the heart of the basin are now becoming riddled by pockets of moisture, which is a necessary ingredient for tropical systems to thrive.

One tropical wave will travel westward across the Caribbean Sea this weekend to early in the new week and is unlikely to show much organization.

"Wind shear is likely to increase over the Caribbean into early this week but could drop off when the system approaches Central America or southeastern Mexico during the middle and latter part of this week," AccuWeather Chief On-Air Meteorologist Bernie Rayno said. 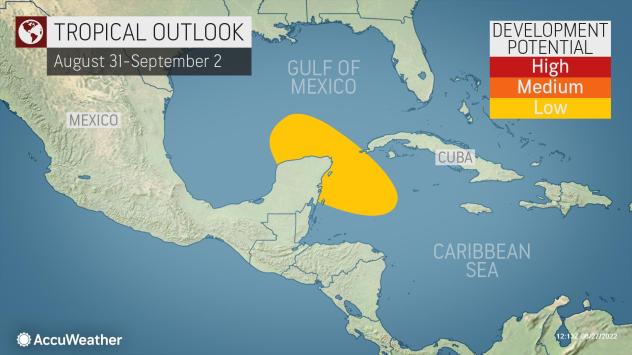 "As long as wind shear remains strong, that system is unlikely to develop. But, if wind shear drops off later in the week, it is possible for a system to organize over the northwestern Caribbean and then track into the Gulf of Mexico and strengthen," Rayno said.

If that system were to develop in the scenario outlined by Rayno, there is a chance the Gulf Coast of the U.S. could be threatened by a landfalling tropical storm or hurricane during the Labor Day weekend. People along the Gulf Coast, as well as those in the petroleum, boating and fishing industries in the region, should monitor developments with this system this week.

Elsewhere across the Atlantic and more than 1,000 miles farther to the east, showers and thunderstorms associated with another tropical wave were blossoming over the central Atlantic. Forecasters say there are signs that this system has favorable conditions to develop over the next several days. Should this activity continue, the system could evolve into a tropical depression or tropical storm at any point into this week. 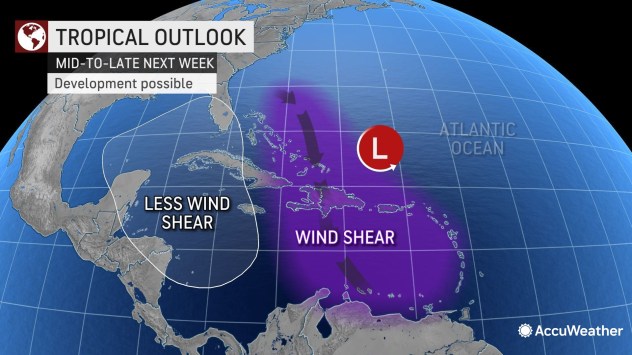 Steering breezes are likely to guide that mid-ocean system slowly toward the west-northwest into this week.

"It is possible the impacts of that system, should it hold together, could reach the islands in the northeastern Caribbean during Wednesday or Thursday," AccuWeather Senior Meteorologist Dan Pydynowski said.

Interests in the Caribbean, especially those from the Leeward Islands to Puerto Rico, should monitor this system's progress.

The third area of disturbed weather is a batch of tropical waves that will be pushing off the coast of Africa and then across the western and central Atlantic into this week. While there are no signs of development with this system through this weekend, it is possible that one or more of these waves will become better organized this week. This system, should it develop, is not likely to pose a threat to land over the next week to 10 days. 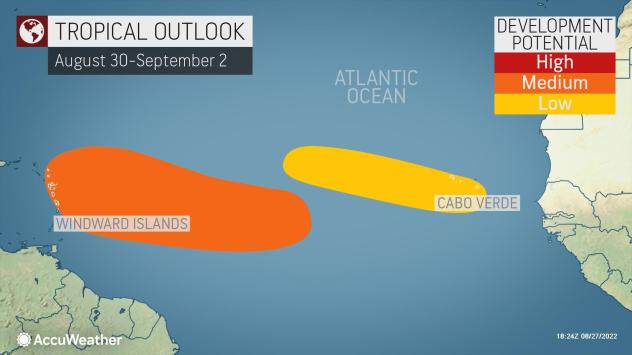 Thousands of miles farther to the north, a broad area of low pressure could allow a tropical system to brew well off the mid-Atlantic and New England coasts later this week. Steering breezes could guide this feature near Newfoundland or waters just offshore next weekend.

As of Saturday, the tropical Atlantic has not had a single named system or even a tropical depression during August. Records indicate that this has only occurred in less than a handful of years since the late 1920s. It is possible that prior to the use of weather satellites in the early 1960s, some storms were missed. Since 1960, there were only two years, 1997 and 1961, when there were no named storms in August.

A scientific parameter that measures the severity of a hurricane season, known as Accumulated Cyclone Energy, or ACE, was at historically low levels with just days remaining in August. ACE tracks the combined strength and duration of all tropical storms and hurricanes. The stronger the tropical system is and the longer it lasts, the more energy it accumulates for the seasonal tally. All tropical systems, including tropical storms and hurricanes, are considered to be cyclones, meaning that zero ACE had accumulated through the late stages of the month.

Should the development of a named storm in the Atlantic hold off until after the month is over, this August will join the ranks of only a few years -- 1997 and 1961 -- during which there was zero ACE in the month of August.

Since there have only been three short-lived tropical storms, Alex, Bonnie and Colin, earlier this season, this season's ACE is at a mere 2.8. 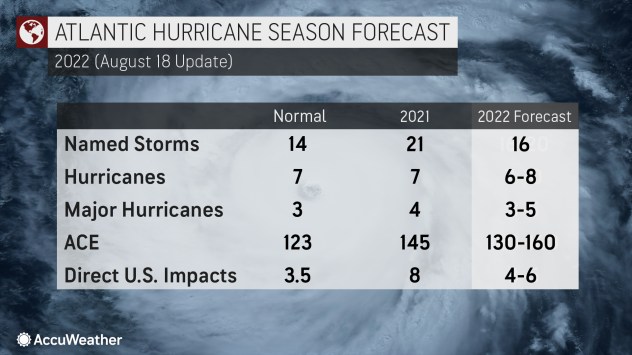 But AccuWeather's team of long-range meteorologists, led by Hurricane Expert Dan Kottlowski, continues to warn that despite the sleepy nature of the Atlantic much of this season thus far, conditions can and are likely to change in a hurry. AccuWeather meteorologists are projecting a total of 16 named storms with six to eight hurricanes that include multiple threats to the United States and its territories in the Caribbean.

There is a significant chance that multiple tropical systems may be spinning at the same time over the Atlantic basin around the Labor Day weekend.