May 15 marks the beginning of the central and east Pacific hurricane season.

Hurricane Agatha, the first named storm of the year in the East Pacific Ocean, made landfall Monday afternoon on the southern Mexico coast just west of the town of Puerto Angel. The storm also made history in the process.

Agatha, a Category 2 storm, had maximum sustained winds around 105 mph as of 4 p.m. CDT Monday, down slightly from 110 mph earlier in the day when it came close to reaching major hurricane status (111 mph or higher). 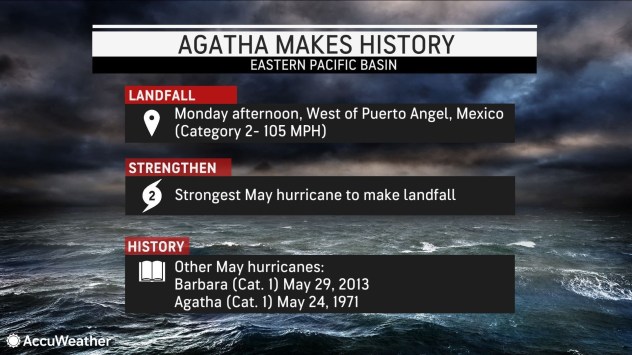 When the storm made landfall at Category 2 strength, it became the strongest May hurricane to ever make landfall in the eastern Pacific basin. Only two hurricanes in recorded history have made landfall in Mexico during the month of May -- Barbara on May 29, 2013, and Agatha on May 24, 1971 -- both of which were Category 1 hurricane strength.

AccuWeather meteorologists have rated Agatha a 3 on the AccuWeather RealImpact™ Scale for Hurricanes in Mexico as a result of the storm's damaging winds and significant flooding threat.

The government of Mexico hoisted hurricane warnings from Salina Cruz to Lagunas de Chacahua, Mexico, ahead of impact. Winds within the center of the storm had reached 75 mph (120 km/h), Category 1 hurricane strength, at 7 a.m. CDT Sunday, a little over 24 hours after Tropical Storm Agatha formed. 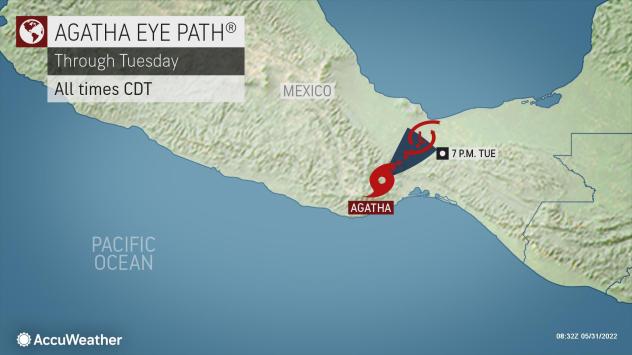 Conditions along the southwestern coast of Mexico began to deteriorate early Monday morning as the outermost rain squalls moved onshore. As Agatha neared the coastline and eventually moved over land, conditions in Oaxaca and Chiapas continued to worsen.

Municipal authorities in Huatulco, a resort region along the southern coast of Mexico, ordered “the absolute closure” of all the resort’s beaches and its famous seven bays, many of which are reachable only by boat, The Associated Press reported on Monday. They also closed local schools and set up emergency storm shelters.

Hurricane-force winds (maximum-sustained winds of 74 mph or greater) were expected near where the storm made landfall along Mexico's southern coast. 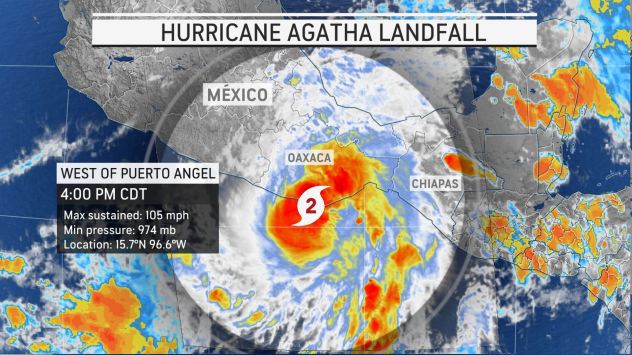 Winds of that strength can lead to downed trees and power lines, and structural damage, according to Dan Pydynowski, a senior meteorologist at AccuWeather who regularly issues tropical outlooks for the Atlantic and East Pacific basins. 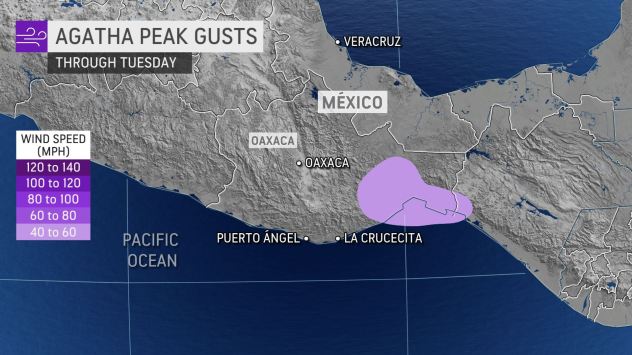 Large and destructive waves are not the only coastal hazard. Strong onshore winds caused water to pile up at the coast, with a storm surge of up to 10 feet (3 meters) near and east of the landfall point as Agatha moved ashore.

"Flooding rainfall is expected to be one of the biggest impacts across southern Mexico and parts of Central America," Pydynowski said.

Heavy rain is likely to pour down from Acapulco to Oaxaca and Tehuacán, Mexico, through Tuesday, posing a significant risk to life and property. 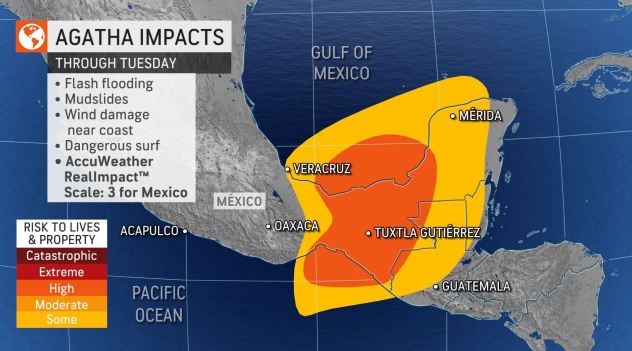 "The heaviest rain will fall across the Mexican states of Oaxaca and Chiapas, causing flash flooding, mudslides and road closures," Pydynowski said.

Residents living in and around mountainous areas will be at the highest risk to experience these life-threatening dangers, as the steep slopes can easily give way once the ground becomes extremely saturated. Mudslides can occur with little warning, making it vital for people to be aware of rapidly changing conditions and have an emergency plan in place.

Rain amounts of 6 inches (150 mm) or more are expected to be widespread across southern Mexico during the life span of the storm. Coastal portions of Oaxaca and Chiapas can expect the highest rain amounts of 8-12 inches (200-300 mm). Mountainous areas will be most likely to reach the AccuWeather Local StormMax™ of 28 inches (710 mm).

"Additional heavy rainfall is expected after the storm which can lead to additional flooding and hamper cleanup efforts," Pydynowski said. 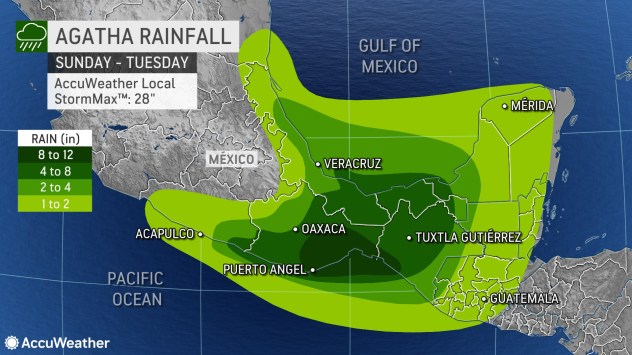 The 2022 East Pacific tropical season is off to a quick start after beginning on May 15. AccuWeather forecasters are predicting a normal to above-normal season with 15-19 named storms and the possibility of six to eight of them reaching hurricane force. The normal count of named storms in the basin is about 15 storms, with eight achieving hurricane status.

AccuWeather meteorologists will be closely monitoring the leftover energy from Agatha as it crosses Mexico and enters Atlantic basin waters of the southern Gulf of Mexico and the northwestern Caribbean Sea. There is now a good chance it could redevelop into the Atlantic's first named storm.

How the JFK 'eternal flame' persists even amid inclement weather
Tree may be the world's oldest, dating to 3,400 years before the birth of Christ
Watch the AccuWeather TV network's 2022 hurricane season special