The flame was constructed more than half a century ago to withstand all elements, but there have been at least two occasions on which it's been extinguished -- and the weather was to blame for one of them. 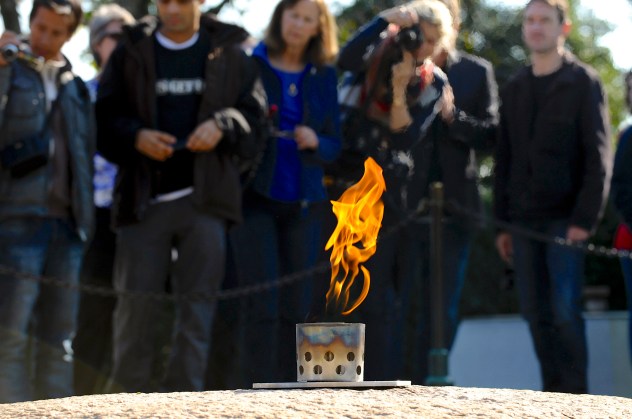 FILE - In this Tuesday, Oct. 29, 2013 file photo, visitors stand near the eternal flame at the grave site of U.S. President John F. Kennedy at the Arlington National Cemetery in Arlington, Va. The cemetery transferred the flame from a temporary burner to the restored permanent eternal flame that is part of a memorial to the 35th president. Repairs began in April 2013 to replace components of the eternal flame's burner. (AP Photo/Susan Walsh)

On a brisk November day in 1963, Jacqueline Kennedy stood before the coffin of her late husband, lighting a torch at the head of the grave with the intention of the flame being an eternal symbol of John F. Kennedy's spirit.

The symbol had been a last-minute request from the former first lady the day before the graveside service that sent engineers scrambling to scavenge through electrical shops for the necessary supplies to create a burner for an eternal flame that could endure the elements, according to the U.S. Army Corps of Engineers. On such short notice, they turned up with what the Corps described as a tiki torch.

Members of the Corps tested the torch, soaking it with water and blasting it with air, and the flame persisted.

A gas line connected to a propane tank 200 feet from the grave fed the flame "at a pressure high enough to resist being blown out by the heaviest wind," The New York Times reported at the time. Evergreens were placed around the base to cover the tubing and base of the device.

But since that day, the flame has been accidentally extinguished at least two times in over 50 years, one of which was due to weather-related technical difficulties.

The first time the flame was extinguished was Dec. 10, 1963, after it was doused with holy water just 15 days after it was lit.

The superintendent of Arlington National Cemetery at the time, John C. Metzler, told The Associated Press that a group of children from 8 to 11 years old had been taking turns sprinkling the grave with holy water when "the cap came off the bottle, and a stream of water hit the flame directly -- extinguishing it."

One of the assistants at the graveyard was able to relight the flame within a few minutes.

Confidence in the permanence of the quickly-cobbled-together ignition device was hardly high, with The New York Times writing the day of the ceremony that it was a temporary fixture. A final decision had yet to be made on the nature of a more permanent arrangement.

The upgrade came a few years later in 1967, a few days after the remains of President Kennedy and two of his deceased children were moved to their permanent grave about 40 feet to the center of the then-unfinished memorial.

The grave area was paved with irregular stones of Cape Cod granite, taken from near the president's home by family members, and fescue (a type of grass) and clover planted around them to give the appearance of stones naturally sitting in a Massachusetts field, according to the John F. Kennedy Presidential Library and Museum. 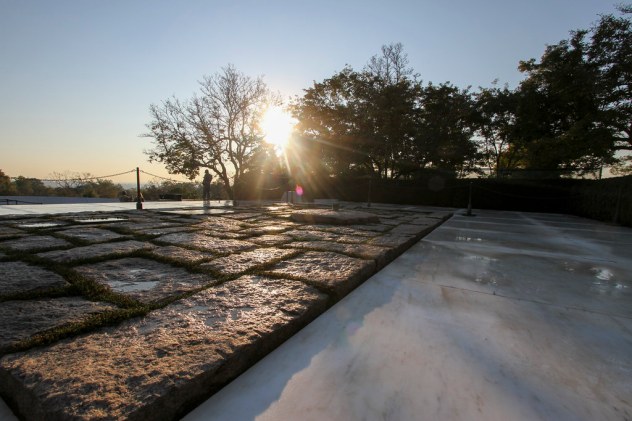 ARLINGTON, Va. – The John F. Kennedy Eternal Flame sits dormant just prior to Secretary of the Army John McHugh transferring the JFK Eternal Flame back to its permanent location on Oct. 29, 2013, after repair work to the site was completed. The flame underwent a full replacement of gas and airlines, received new digital controls and sensors, as well as a new burner assembly. (U.S. Army photo/Patrick Bloodgood)

The new burner had a specially-designed apparatus created by the Institute of Gas Technology of Chicago, consisting of a nozzle and an electric ignition system, according to the museum's website. A constantly flashing electric spark near the tip of the nozzle reignites the gas if the exposed flame is extinguished by wind, rain or any unforeseen accidents to create an enduring flame.

Later that year, however, an August rainstorm extinguished the flame when the automatic spark igniter faltered due to a flooded transformer. It was quickly repaired and the torch relit.

There are a few technicalities to the persistence of the flame. For example, the flame can be shared and it can even travel.

During the days following Kennedy's assassination, Rev. Walter E. Fauntroy represented the civil rights organization Southern Christian Leadership Conference by carrying a torch lit from the eternal flame to ceremonies presided over by President Lyndon B. Johnson at the Lincoln Memorial. 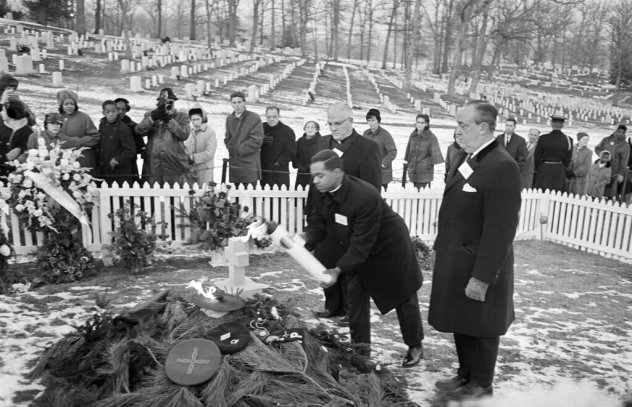 The Rev. Walter E. Fauntroy of a Washington Baptist church ignites a torch from the eternal light burning on the grave of John F. Kennedy in Arlington National Cemetery, Dec. 22, 1963. The torch is one of those used to light candles at the memorial service held for the former chief executive at the Lincoln Memorial. President Johnson spoke at the service which was held to mark the end of the 30-day mourning period for the assassinated president. (AP Photo/Byron Rollins)

In 2013, the fire of the torch was shared once more with the specially-designed lamp that would carry the flame across the Atlantic to New Ross in County Wexford, Ireland, in recognition of the 50th anniversary of Kennedy's visit to his ancestral home during a state visit in 1963. The flame was used to light the Emigrant Flame memorial in the same county that Kennedy's great-grandfather had immigrated from in 1848.

In a similar fashion, the flame can also be transferred to a temporary device if maintenance is required for the main one. Then, when the main source needs to be extinguished for repairs, it can be said that the eternal flame remains lit. 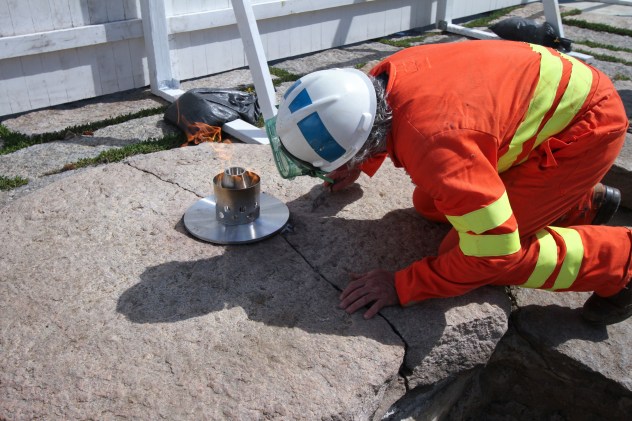 ARLINGTON, Va. – Brian Swersky of Gasman Services and Consulting fabricated the new John F. Kennedy Eternal Flame burner assembly, inspects the burner and igniters to ensure they are working properly Oct. 1, 2013. Contractors, overseen by the Norfolk District of the U.S. Army Corps of Engineers, made upgrades to the flame over the summer by installing of a new burner, igniter, gas, and air lines, as well as new safety controls and sensors. (U.S. Army photo/Patrick Bloodgood)

This happened in 2003 when the U.S. Army Corps of Engineers Norfolk District, along with contracting partners, replaced the burner assembly and the supporting infrastructure. They replaced the gas, electric and compressed airlines for the flame and installed new drainage lines under the flame, according to the Arlington National Cemetery's website. The gas pressure regulators were also moved outside the chamber for easier maintenance and access.

This was only the second time in history that a temporary flame has been used at the gravesite, with the first being when Jackie Kennedy reached over the mound of evergreen wreaths that cloaked the quick work of engineers to light the memorial created for her late husband.