Coronavirus expert says he knows when the virus 'will burn itself out,' according to leaked analysis 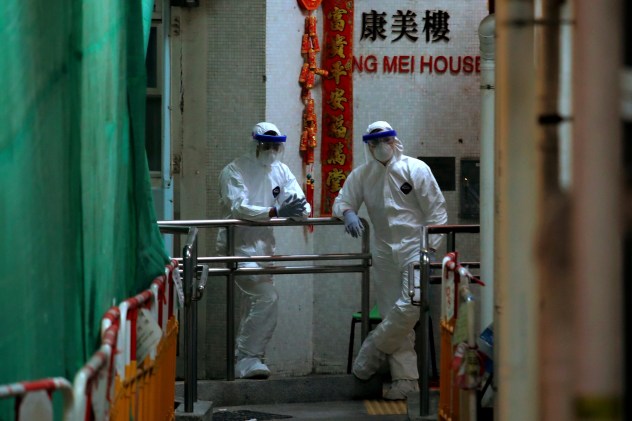 Personnel wearing protective suits wait near an entrance at the Cheung Hong Estate, a public housing estate during the evacuation of residents in Hong Kong, Tuesday, Feb. 11, 2020. The Centre for Health Protection of the Department of Health evacuated some residents from the public housing estate after two cases of novel coronavirus infection to stop the potential risk of further spread of the virus. (AP Photo/Kin Cheung)

With the overall death toll climbing each day, but the daily death toll showing signs of subsiding, fear and uncertainty have spread farther and farther around the globe as the novel coronavirus continues to captivate the world’s attention. However, John Nicholls, a pathology professor at the University of Hong Kong, says he knows when the virus will become inactive.

In a private conference call organized last week by CLSA, a brokerage firm based in Hong Kong, investment analysts had a chance to ask Nicholls, one of the world's foremost experts on the topic, questions about the novel coronavirus. In the days since the call took place, details of Nicholls' analysis have surfaced on social media and elsewhere online, including a transcript of the call.

Nicholls responded to emailed questions from AccuWeather on Wednesday and confirmed his participation in the discussion, but emphasized that his remarks were made in “a personal capacity” and meant to remain “private.” He said the call was recorded “without my knowledge or consent” and then leaked on social media. When asked by AccuWeather, Nicholls did not dispute any of quotes attributed to him in the leaked transcript. CLSA has not responded to AccuWeather's request for a comment on the conference call.

"Three things the virus does not like: 1. Sunlight, 2. Temperature, and 3. Humidity," Nicholls said in response to a question about when he thinks confirmed cases will peak. 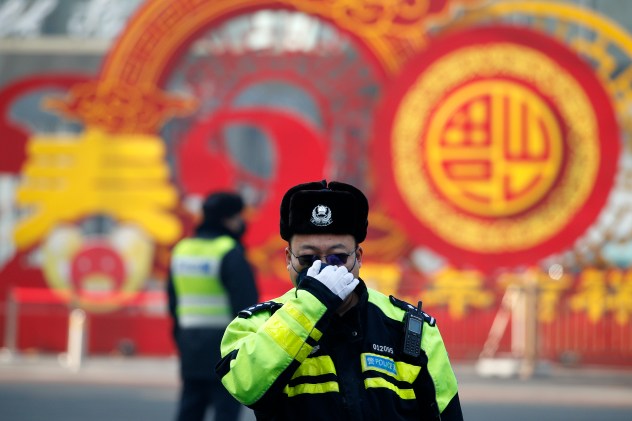 A traffic policeman adjusts his mask on a street in Beijing, Sunday, Feb. 9, 2020. China's coronavirus death toll on Sunday has surpassed the number of fatalities in the 2002-2003 SARS epidemic, but fewer new cases were reported in a possible sign its spread may be slowing as other nations step up efforts to block the disease. (AP Photo/Andy Wong)

"Sunlight will cut the virus' ability to grow in half so the half-life will be 2.5 minutes and in the dark it's about 13 to 20 [minutes]," Nicholls said. "Sunlight is really good at killing viruses."

For that reason, he also added that he doesn't expect areas such as Australia, Africa and the Southern hemisphere to see high rates of infection because they are in the middle of summer.

Regarding temperatures, Nicholls said the warmer the better for stopping the spread of the virus, according to the transcript of the conference call.

"The virus can remain intact at 4 degrees (39 degrees Fahrenheit) or 10 degrees (50 F) for a longer period of time," Nicholls said, referring to Celsius measurements, according to the transcript. "But at 30 degrees (86 degrees F) then you get inactivation. And high humidity -- the virus doesn't like it either," he added, the transcript of the call showed.

However, Nicholls also said that he doesn't consider SARS or MERS, a Middle Eastern novel virus that spread in 2012, to be an accurate comparison for this year's outbreak. Rather, the novel coronavirus most closely relates to a severe case of the common cold.

"Compared to SARS and MERS, we are talking about a coronavirus that has a mortality rate of eight to 10 times less deadly to SARS to MERS," Nicholls said. "So, a correct comparison is not SARS or MERS but a severe cold. Basically, this is a severe form of the cold."

Similar to a common cold, the surrounding environment of the outbreak plays an important role in determining the survivability and spreadability of the virus, he continued. Because of the impending shift in seasons, Nicholls said he expects the spread of the virus to be curbed in a matter of months.

"I think it will burn itself out in about six months," Nicholls said. 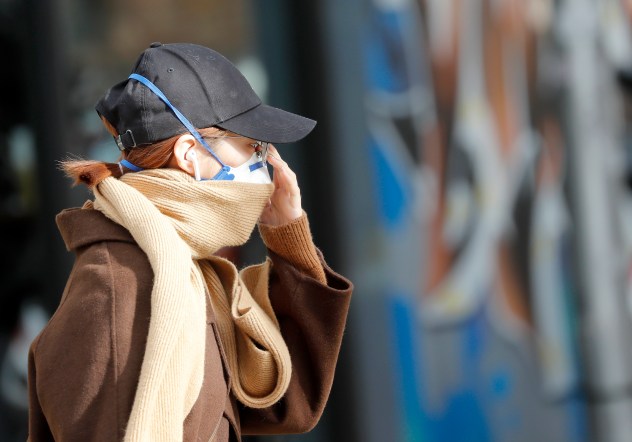 A woman with a face protection mask walks along the high street in Brighton, Tuesday, Feb. 11, 2020. Britain has declared the new coronavirus that emerged from China a "serious and imminent threat to public health'' and announced new measures Monday to combat the spread of the disease.(AP Photo/Frank Augstein)

According to the transcript, Nicholls elaborated on exactly when he expects the novel coronavirus to subside as investment analysts posed more questions.

Average temperatures typically reach as high as 86 F in Wuhan, the outbreak's epicenter, on June 17. The AccuWeather forecast calls for temperatures ranging from a high in the low 60s F to a low of below 30 F over the next seven days.

When asked about the probability of the novel coronavirus becoming endemic, Nicholls responded, "If it is like SARS it will not be endemic. It most likely will be a hit and run just like SARS."

Outside of China, Nicholls added to AccuWeather that he would expect the impacts of the virus to be varied in places such as Singapore, Indonesia and Malaysia. Singapore, Nicholls said, may potentially see the virus linger for longer due to an abundance of large public spaces with indoor air-conditioning, such as malls, where people congregate and temperatures and humidity remain lowered.

AccuWeather Founder and CEO Joel Myers speculated earlier this month that spring may be a pivotal time for the fate of the coronavirus. In response to Nicholls analysis, Myers said, “By mid-April we should know” whether the virus is on the decline because of the changing weather.

Experts that AccuWeather has spoken to previously have stopped short of linking weather to the spread of the virus.

"Many respiratory viruses transmit better at low temperature and humidity, but we have no data on how this might affect 2019-nCoV transmission," Pekosz said in an email to AccuWeather on Feb. 4.

Nicholls' comments, while made privately, represent the most definitive tie to the weather a health expert has made yet.

At the University of Hong Kong, Nicholls has spent the past 25 years studying coronavirus and he served as a key member of the team that characterized SARS. The Hong Kong University Faculty of Medicine's Clinical Research Centre also created the world's first lab-grown copy of novel coronavirus, according to CNN correspondent Kristie Lu Stout, giving researchers a major breakthrough in understanding the behavior of the virus. 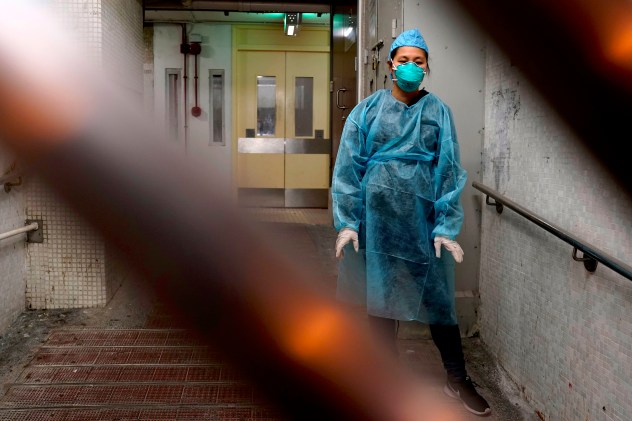 A personnel wearing protective suit waits near an entrance at the Cheung Hong Estate, a public housing estate during evacuation of residents in Hong Kong, Tuesday, Feb. 11, 2020. The Centre for Health Protection of the Department of Health evacuated some residents from the public housing estate after two cases of novel coronavirus infection to stop the potential risk of further spread of the virus. (AP Photo/Kin Cheung)

But despite that frightening trait, Nicholls' long-term optimism hasn't changed in other public remarks that he's made recently.

"My feeling is that this is going to be just like SARS, that the world is going to get a very bad cold for about five months," Nicholls told CNN last week.

"Of course the weather and climate will be crucial," Myers said of the virus' capacity to spread as the seasons change. "Where spring comes early with above-normal temps and more sunshine, the virus spread will slow faster than where clouds diminish the sunshine and temperatures and humidities are slow to rise."

The World Health Organization (WHO) officially designated the virus COVID-19 on Tuesday, adding that the first vaccine could be available in 18 months, according to Reuters.