Windstorm sweeps across the U.S. Northwest downing trees all over the region on Jan. 12-13.

Fierce winds throughout the Rockies and Plains reached such extreme speeds that they equaled those of a major hurricane on Wednesday into Thursday. From Colorado to Montana and up into the Canadian Prairies as well, the gusts downed trees, caused widespread travel hazards and even sent one ice fishing trailer skidding away from its home.

Residents throughout the region will likely spend their Friday cleaning debris and picking up the scattered pieces left behind by the midweek storm, brought on by the train of storms that have pounded the Northwest unrelentingly.

"A powerful storm and frontal boundary moved from the Rockies into the Plains on Wednesday, and the tremendous change in pressure is what led to the strong, damaging winds," AccuWeather Senior Meteorologist Bill Deger said. 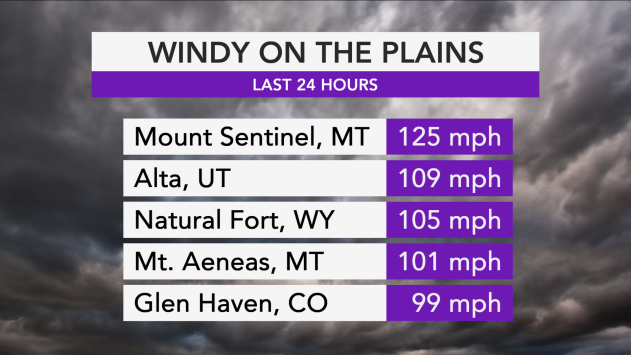 Many videos on social media showed drivers needing to dodge and swerve around fallen debris on roads, particularly around the Highway 56 area of Montana.

The most extreme wind gusts were recorded in the area of Mount Sentinel, Montana, located near Missoula, which reported a 125-mph gust. That wind speed is the equivalent of a Category 3 storm, which is considered a major hurricane. Locations in Utah and Wyoming also recorded triple-digit gusts, breaking multiple records and prompting wind warnings through Friday.

That train of storms has left hundreds of thousands of residents without power at different points in this week.

"At one point late Tuesday night, nearly 700,000 customers were without power across Washington and Oregon, according to PowerOutage.US," AccuWeather Meteorologist Mary Gilbert said. "During the midday hours on Wednesday, more than 600,000 customers remained without power. By Thursday morning, that number had been reduced to just over 200,000 customers still in the dark." 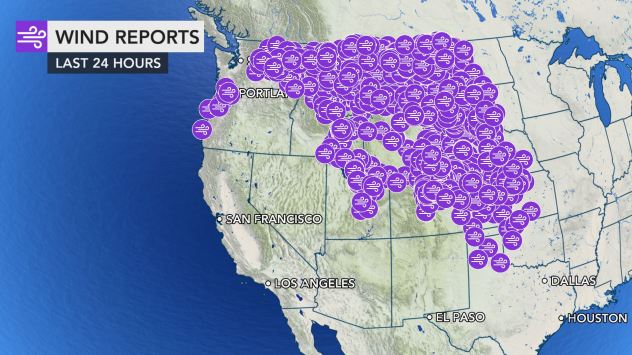 In Glasgow, located in the northeastern portion of Montana, members of the area's National Weather Service (NWS) office needed multiple attempts to launch a weather balloon in the midst of 67-mph winds. Their initial try failed, as the buffeting gusts immediately popped the balloon.

Earlier in the day on Wednesday, a station recorded a 79-mph gust in Glasgow, breaking the area's record for strongest January wind, previously 72 mph set in 2009. It was also the second-strongest peak wind gust ever recorded for the city.

Launching a balloon in 67 mph winds is not an easy task. If at first you don't succeed, try, try again! After the balloon popped on the first attempt, the second launch went airborne. The radiosonde hit the ground multiple times, but somehow did not fail. #mtwx pic.twitter.com/wtQ6xLZnbD

Farther north, Canadians who live across the Prairies also dealt with the ferocious winds scattering furniture and, in one case, an entire fishing cabin.

On Lac Pelletier in Saskatchewan, powerful winds sent the fishing trailer sliding across the lake, much to the amusement of one child. The young girl can be heard in the video watching in amazement as heavy winds dragged the trailer from one end of the lake to the other.

Others in Saskatchewan battled near-impossible driving conditions, as the heavy wind and rain took away nearly all visibility on the roads. 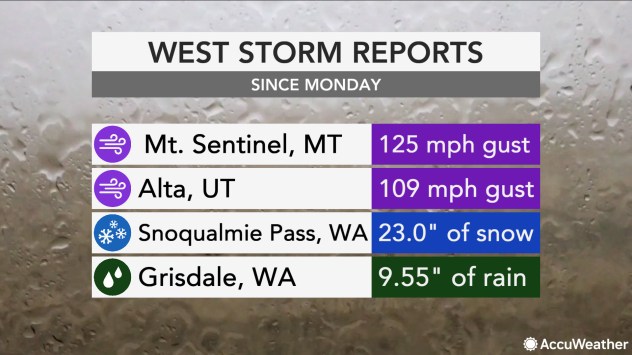 The storm, which originated in the Pacific Northwest, has also steadily dropped wintry precipitation on many areas of the region, especially to higher-elevation spots since the beginning of the week.

Washington's Snoqualmie Pass along I-90 picked up nearly 2 feet of snow, increasing this winter's total to 236 inches, according to the Tacoma News Tribune. That's the area's highest total in 10 years. 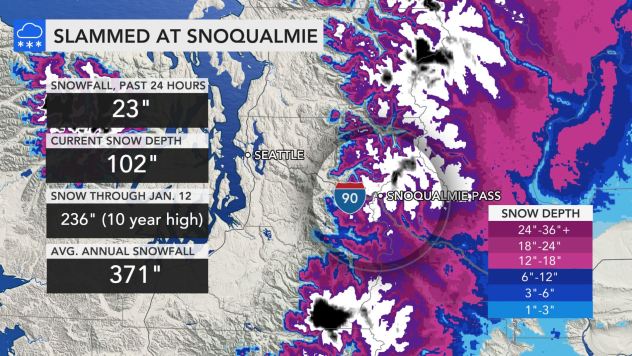 Across Idaho, many areas also reported over a foot of snow on Wednesday, led by the town of McCall, which recorded 16 inches.

In Oregon, a mix of wind and heavy precipitation on Tuesday night downed a tree directly onto a police officer's car, damaging the vehicle. Dashcam footage captured the tree falling suddenly during the dark drive, cracking the windshield and destroying the rear window glass.

Luckily, the officer was able to walk away uninjured. 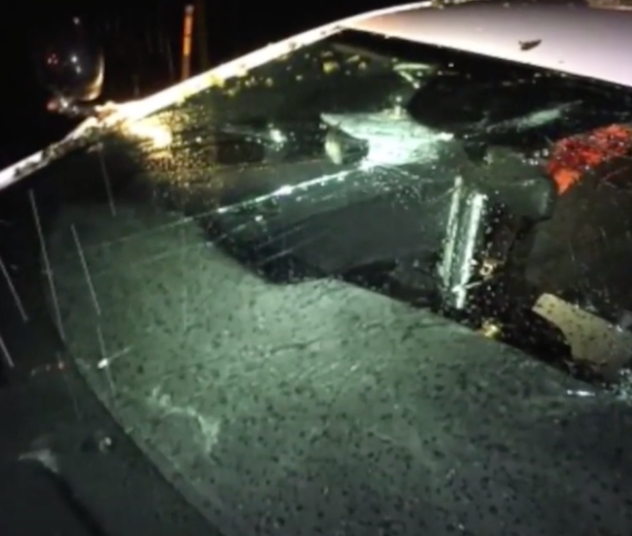 Going forward, Gilbert said areas of the Pacific Northwest will have a bit of reprieve from the wintry mess, but that won't be the case for the Plains.

Deger said the strong winds will shift farther east and south through Friday.

"On Friday, areas from South Dakota to Oklahoma will experience wind gusts frequenting 45-55 mph, with an AccuWeather Local StormMax™ of 70 mph, as the storm begins to exit to the east. The combination of the strong winds and dry conditions will promote an enhanced risk for fires in the central Plains, as well," Deger said.

DC to dodge weather ghosts of Inauguration Days past
Will star QB have to contend with snow for first time ever?
Why you shouldn’t drink beverages that are hotter than 140 degrees