DC to dodge weather ghosts of Inauguration Days past

The best chance for accumulating snow will be found in the higher-elevation areas across the region.

AccuWeather meteorologists say that concerns for a winter storm brewing for the eastern United States during the week of President-elect Joe Biden's inauguration persist, but the latest trends suggest that a large storm will not arrive until after Inauguration Day, rather than just before.

As the storm timing becomes more clear, so too do the details for the weather conditions expected for Inauguration Day. A host of elected officials and former presidents are expected to attend the outdoor event, which is facing some changes in format this year due to the coronavirus pandemic.

Biden will be sworn in as the 46th President of the United States on the West Lawn of the U.S. Capitol on Wednesday, Jan. 20, 2021, alongside Vice President-elect Kamala Harris. The inaugural address will follow ahead of the inaugural parade — a virtual version to safeguard against the spread of COVID-19.

The outdoor event is sure to have one visitor that will play a role — Mother Nature, although the weather may be tame compared to recent Inauguration Days.

Rain showers forced attendees to pull out umbrellas and don ponchos at the inauguration of President Donald Trump in 2017. Although the wet weather was accompanied by unusually mild conditions for the middle of January in the nation’s capital. The temperature was 48 degrees Fahrenheit as Trump was sworn into office at noon, making it the 4th warmest January inaugural temperature on record, according to a report from The Washington Post. 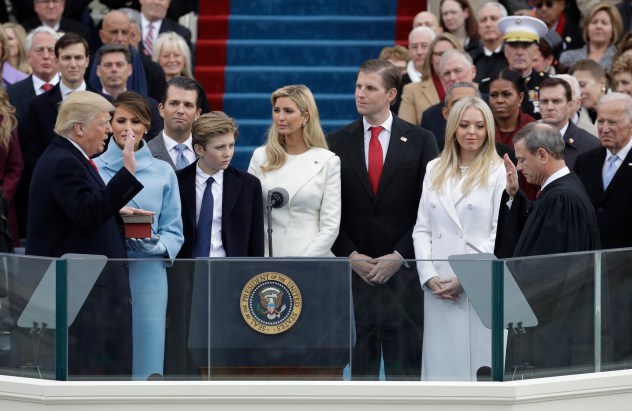 In this Jan. 20, 2017 file photo, Donald Trump, left, is sworn in as the 45th president of the United States by Chief Justice John Roberts, right, as Melania Trump, second left, and his family watch during the 58th Presidential Inauguration at the U.S. Capitol in Washington. (AP Photo/Patrick Semansky, File)

For the upcoming inauguration, it now appears the weather will cooperate as best it can, according to forecasters, considering the event is held during the middle of January, or almost in the middle of the winter.

Barack Obama was sworn in as the 44th President of the U.S. in 2009 amid subfreezing conditions. The temperature at noon was 28 degrees when he took the Oath of Office. It was so cold that Obama made a prediction of his own for his second inauguration in 2013: "This one is going to be warmer," he pledged to a voter, according to Politico. Turns out his forecast was accurate as the high climbed to 45 F at noon on Jan. 20, 2013, the National Weather Service reported. 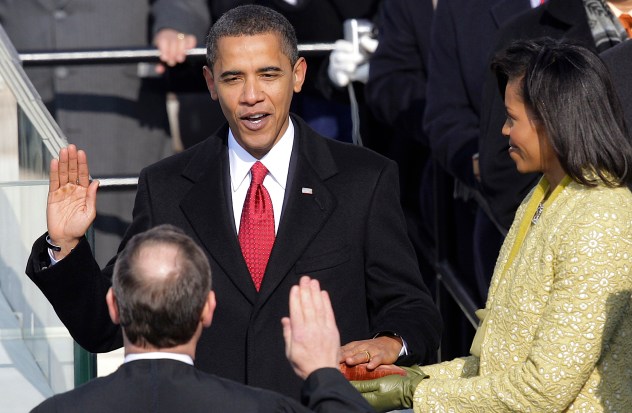 Barack Obama, left, joined by his wife Michelle, takes the oath of office from Chief Justice John Roberts to become the 44th president of the United States at the U.S. Capitol in Washington, D.C., in this Jan. 20, 2009 file photo. (AP Photo/Jae C. Hong, File)

Some inaugurations in the past occurred during even more bitter conditions. The temperature at noon reached only 7 F -- after plunging to a low of minus 4 F -- and AccuWeather RealFeel® Temperatures well below zero during President Ronald Reagan's swearing in for his second term in 1985. The frigid conditions forced that ceremony to be held indoors.

When John F. Kennedy was sworn in on Jan. 20, 1961, a snowstorm the night before dumped close to 8 inches of snow on Washington, D.C. The snow had to be cleared away for the ceremony. 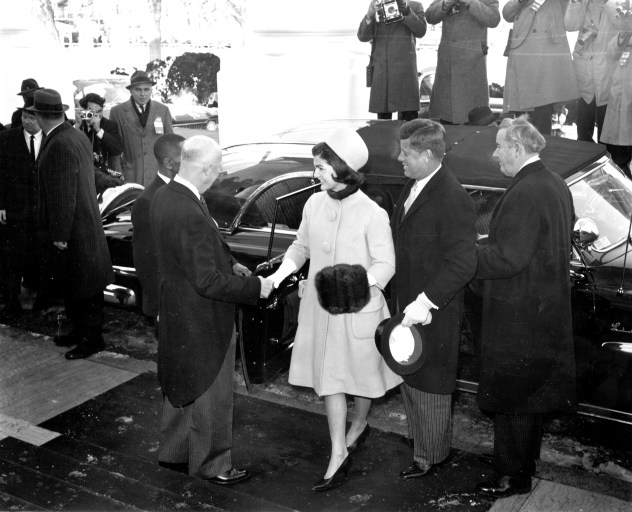 During President Franklin D. Roosevelt's second inauguration in 1937, he and bystanders weathered a deluge with temperatures hovering just above the freezing mark. 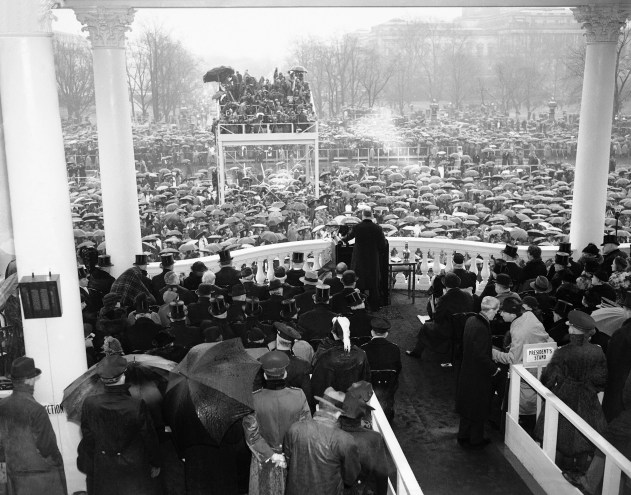 A view looking out into the crowd as President Franklin D. Roosevelt speaks at his inaugural in Washington, Jan. 20, 1937. High dignitaries of the nation are seated near the president. High above the rain-swept crowd is the stand from which photographers made pictures of the inaugural itself. (AP Photo)

The weather for the first part of next week is likely to be influenced by a large storm and a secondary spinoff storm that will develop and affect the northern states into this weekend.

A powerful storm rolled into the Northwest at the start of this week with torrential rain and high winds. This same storm will blast the North Central states through Friday with high winds, a change to colder air and even snow. A spinoff storm is forecast to roll northward in the Northeast early this weekend and will help to drag colder air eastward on gusty winds and produce a swath of snow as well.

The effect of the storm duo will be to create a relatively strong west to east jet stream configuration in the North Central and Northeastern states from Monday to Wednesday. This setup will prevent big storms and will instead allow weaker systems to move along.

At this time, it appears one such weak storm system will travel from the Midwest on Monday to off the Northeast coast on Tuesday. Most of the snow and rain showers associated with this system are likely to pass north of the nation's capital.

However, in the wake of that weak storm system, the concept of dry weather for Inauguration Day in Washington, D.C., is becoming more viable at this point.

"We expect some colder, Arctic air to move from Canada to across part of the Northeast around the middle of next week with temperatures of 5-10 degrees below normal, but the core of that Arctic air break-off may stay north of Washington, D.C.," AccuWeather Lead Long-Range Meteorologist Paul Pastelok said. 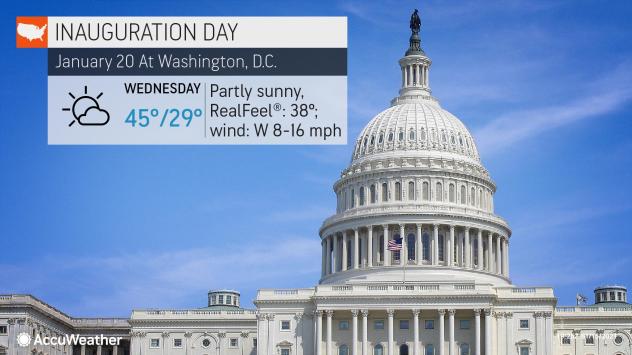 AccuWeather is projecting high temperatures to be in the low to middle 40s -- or just a tad above normal -- on Inauguration Day in the nation's capital. A brisk wind may be present for a time during the morning and midday hours.

The risk of a large winter storm in the Eastern states has shifted to later in the week after Wednesday's events are over. 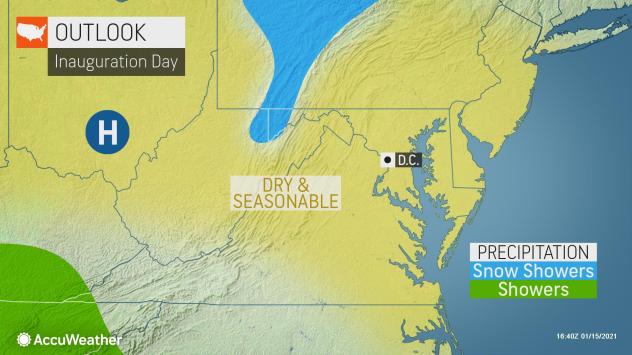 "It is possible that sunshine could yield to increasing clouds or at least some high cloud cover on Wednesday in Washington, D.C., due to a storm we are watching to brew near the Gulf coast," Pastelok said.

When will the polar vortex send Arctic air? It's complicated.
Deadly earthquake leaves hundreds injured, buildings leveled in Indonesia
Why you shouldn’t drink beverages that are hotter than 140 degrees

AccuWeather will continue to provide updates on the weather for Inauguration Day and upcoming storms and colder weather in the days ahead.