Pattern shift to give soggy Northwest a chance to dry out

More than 500,000 power customers in western Washington were without power on Jan. 13, as powerful winds swept through the area.

Following days of drenching rain and mountain snow, a return to a drier pattern is on the horizon for the waterlogged northwestern United States.

A pattern that allowed a long train of storms to pummel the Northwest for over a week will finally begin to break down and allow for an influx of mild, dry air to take root on Thursday. 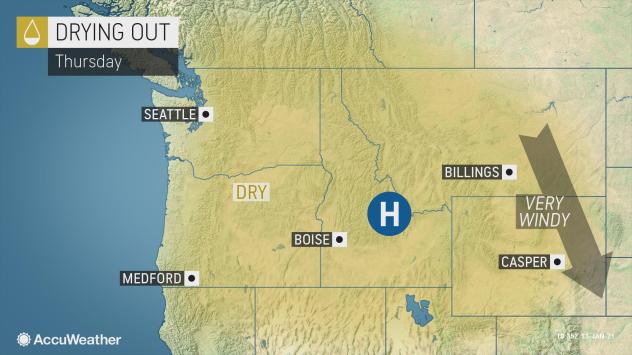 The most recent storm to slam into the Northwest began on Monday. Heavy rain drenched costal communities while snow piled up across the Cascades. Even areas farther inland were unable to escape wet weather as the storm pushed eastward into the northern Rockies through Tuesday night. At one point late Tuesday night, nearly 700,000 customers were without power across Washington and Oregon, according to PowerOutage.US. During the midday hours on Wednesday, more than 600,000 customers remained without power. By Thursday morning, that number had been reduced to just over 200,000 customers still in the dark.

Olalla, Washington, was the big winner -- or loser, depending on your point of view -- of the most recent storm. As of Tuesday night, close to 8 inches of rain had fallen in the community with a few lingering showers likely to continue for a time on Wednesday. 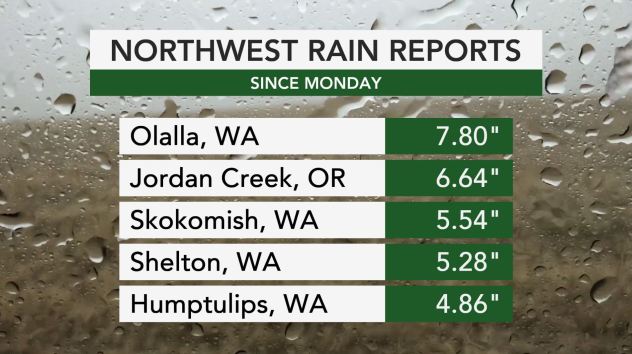 While rain drenched the lower elevations, snow continued to bury the higher elevations across the Northwest. From Monday to Tuesday night, Snoqualmie Pass had recorded just shy of 2 feet of snow, or 23 inches. Several other locations across the Washington Cascades recorded over a foot of snow with the storm, including Stevens Pass. Snow early this week caused many issues for travelers at mountain pass levels and resulted in several road closures.

This storm tracked out of the area on Wednesday and shifted a majority of the heaviest precipitation north of the border, into Canada. Showery conditions persisted for some across the Northwest on Wednesday, but dry weather to fully enveloped the area by Wednesday night.

"High pressure will build into the northwestern U.S. on Thursday, offering a day free of precipitation for the entire region," AccuWeather Meteorologist Ryan Adamson said.

Aside from helping to create a rather pleasant day, this push of mild air may lead to some issues for the region, particularly areas that have been walloped by heavy snow. As temperatures increase, snow will begin to melt and release even more water into already swollen rivers and streams.

"Even with drier weather on the way, it will take a while for river levels to fall," Adamson said. "Therefore, flooding may still be an issue, even on days when the sun is shining." 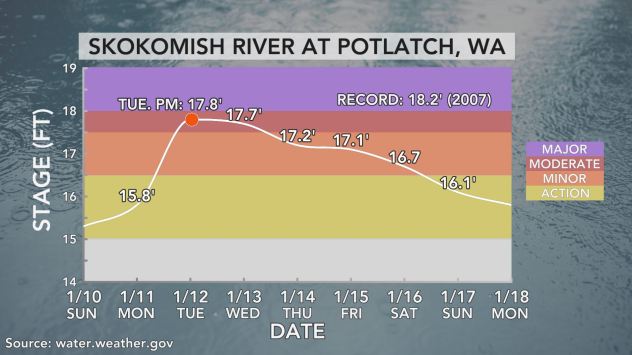 Another threat that will continue to make itself known despite largely dry conditions are landslides. In the aftermath of heavy rainfall and as snow began to melt, landslides began to impact portions of the Pacific Northwest. Landslides can lead to road damage and travel disruptions.

"Some rain and snow may fall in Washington and Oregon on Friday, but it will be light compared to recent events," Adamson said. "Dry conditions will return for the start of the weekend."

Even a break in the rain for several days will not erase the reality that many locations in the Northwest have already exceeded the typical values of monthly rainfall for January. As of Tuesday, Seattle has received 129 percent of its average monthly rainfall, while Portland, Oregon has received 104 percent. While the above-average amount of rainfall has contributed to a dreary start to 2021 for some, this rainfall has helped to erase drought conditions for many across Washington.