While staying at a motel in Cannon Beach on Jan. 10, Eric Brough captured this video of a herd of elk running and attempting to steer clear of waves on the beach.

As colder air and snow loom for the central United States, it will feel like a different season altogether across Southern California as record-challenging warmth is expected to build by the weekend.

Forecasters say a fall flashback is in store for the region, with temperatures expected to climb to levels more typical of September rather than the middle of January late this week and into the weekend.

"An area of high pressure will build northward along the West coast by Thursday. The circulation of air around the core of this high will support gusty offshore winds in Southern California Thursday and Friday," AccuWeather Lead Long-Range Meteorologist Paul Pastelok said. 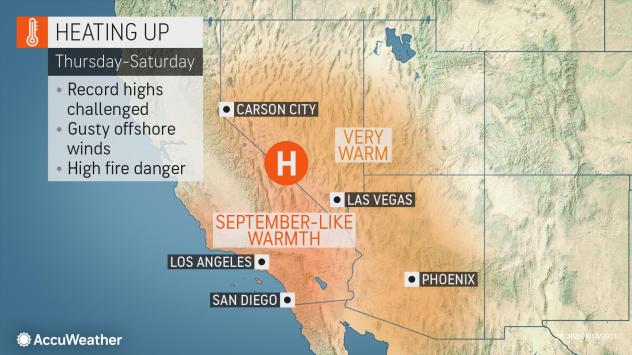 Offshore winds, or winds coming from the direction of the north and northeast, are a contributing factor to the September-like temperatures that are forecast. From this direction, air flows down the mountains of Southern California and then off the coast. When air descends, it compresses and heats up.

"Temperatures are expected to climb into the 80s F in downtown Los Angeles, where an average high for mid-January is 68 F," Pastelok said. 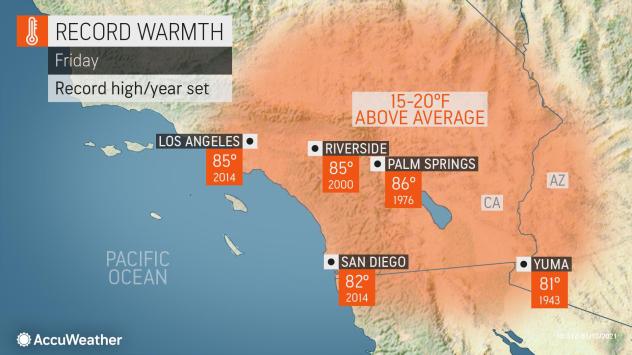 "Although wildfires typically aren't much of a concern by this point in the wet season, given the dry weather so far, this atmospheric setup will be conducive for raising the wildfire risk," Pastelok said.

Most of the storms so far this winter have tracked into the Northwest with precipitation extending as far south as Northern California.

Since Dec. 1, 2020, downtown Los Angeles has only picked up 1.84 inches of rainfall, or about 52% of normal for the time frame. San Diego is faring even worse, with only 0.60 of an inch of rain reported since Dec. 1, or 26% of average. Neither of these cities have received any rainfall this month.

Drought conditions are ever expanding across the region as a result, and will only continue to grow worse with no rainfall anticipated into late January.

The dry vegetation alone lends to a higher fire danger than normal for this point in the year. Factor in the upcoming warmth, as well as some gusty winds, and you have a recipe for trouble. 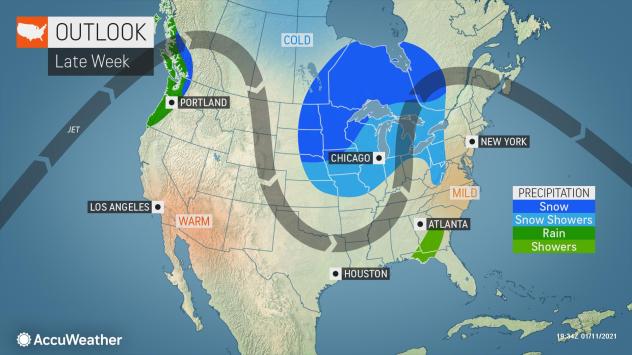 Winds are likely to be at their strongest during the period later Saturday as high pressure settles over the Great Basin, but locally gusty winds can still whip up on Thursday and Friday as the warm air builds.

AccuWeather meteorologists are keeping a close watch on the potential for a stronger Santa Ana wind event to take shape early next week. While temperatures are likely to be past their peak by this point, above-average warmth is likely to hang on past the middle of the month.

Over the next week, residents will need to take every precaution that they typically would during the fall when wildfire season is usually at its peak across Southern California. This includes properly discarding matches and cigarettes, not parking vehicles over dry brush and limiting the use of outdoor flames and power equipment.

'Professor Popsicle' explains mindset is critical to enduring cold
Top winter activities that could send you to the emergency room
Daily coronavirus briefing: Biden gets 2nd dose of vaccine