Following a brief warmup, a return to winter is in the forecast for much of the central U.S.

A big storm that already lashed parts of the Northwest, Rockies and High Plains with fierce winds was barreling eastward and intensifying on Thursday, threatening all manner of winter weather. Winds as high as 125 mph were reported in the high country of Montana. The storm will not only bring a major comeback of winter weather following unusually mild conditions across the Midwest, but it will also unleash high winds and heavy snow along with a sharp blast of cold air.

Blizzard warnings were in effect from parts of northwestern Missouri to central Minnesota and parts of the Dakotas Thursday morning, and the National Weather Service in Des Moines, Iowa, warned that travel may be impossible at times Thursday including around the I-35 corridor of the state. 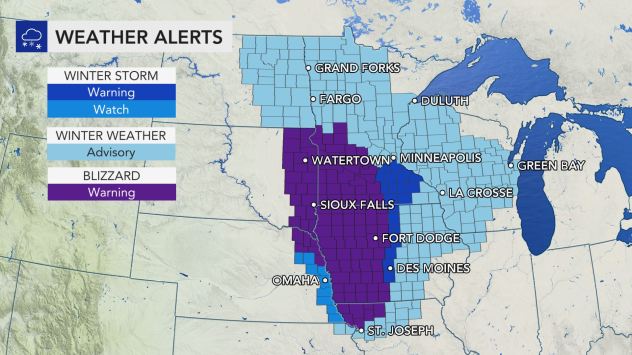 Temperatures climbed to as much as 25 degrees above average during midweek ahead of the abrupt change to harsh, midwinter conditions set to unfold from portions of the Plains to the Great Lakes region.

At Pierre, South Dakota, temperatures are forecast to plunge from a high just a few degrees shy of the record of 60 F set in 1983 late Wednesday to the middle 20s Thursday night with AccuWeather RealFeel® Temperatures in the single digits. The normal high and low temperatures at Pierre are 30 and 10 degrees, respectively. Even though the temperature change will be less extreme farther to the east, the storm will bring temperatures back to near average in its wake.

The storm raced across the southern Canada Prairies during Wednesday night and will then take root around the Great Lakes on Thursday, where it is forecast to stall and unload snow into Friday from the eastern parts of the Dakotas and northeastern Nebraska to northwestern Ontario.

"The heaviest snow, on the order of 6-12 inches (15-30 centimeters) with an AccuWeather Local StormMax™ of 16 inches (40 centimeters), is forecast from northeastern Minnesota and northwestern Wisconsin to part of the Upper Peninsula of Michigan," according to AccuWeather Senior Meteorologist Brett Anderson.

A second zone of 6- to 12-inch snowfall is expected in part of southwestern Minnesota. 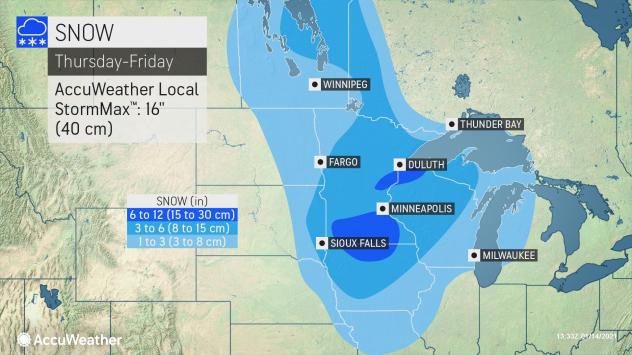 Enough snow to shovel and plow can extend from along the Red River of the North along the Dakota/Minnesota border to central Iowa southern Wisconsin and the northwestern part of the Lower Peninsula of Michigan.

As a cold front advances from the storm, a brief band of snow, snow showers or a wintry mix is forecast to progress from eastern Iowa, northern and central Illinois and southeastern Wisconsin during Thursday afternoon and evening to portions of Indiana, Michigan and western Ohio during Thursday night. Southern Ontario, eastern Ohio, northern West Virginia and western Pennsylvania will face wintry precipitation Friday.

While this band of snow and mixed precipitation is not expected to bring much in the way of an accumulation, just enough can occur to briefly coat roads and sidewalks and make for slippery walking conditions and sudden changes to driving conditions on area highways.

As the storm system intensifies, winds will ramp up as well, adding to travel dangers. Gusts from 80-110 mph buffeted parts of Montana, Wyoming, North Dakota, South Dakota and Nebraska Wednesday and Wednesday night. Winds this strong can cause regional power outages, significant property damage and a high risk of truck blow-overs. 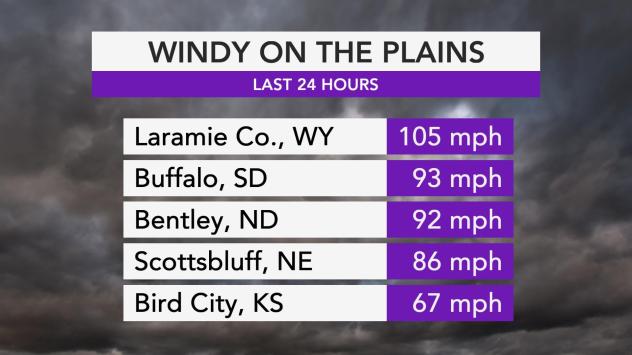 The powerful winds are being generated by a great difference in barometric pressure between the storm (low pressure) moving along the U.S./Canada border and an area of high pressure over the Southwest states. 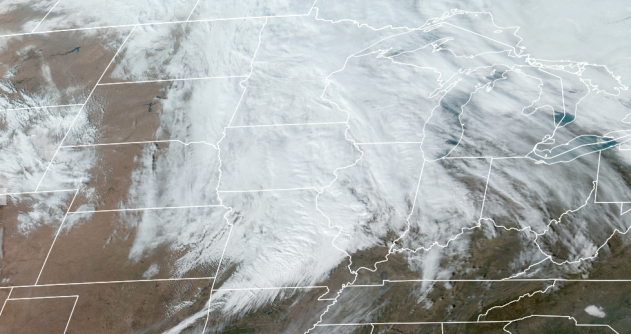 This image, captured on Thursday afternoon, Jan. 14, 2021, shows clouds associated with a potent storm over the north-central United States. (CIRA at Colorado State/GOES-East)

"Wind gusts between 70 and 80 mph are likely outside of the snowfall area from the eastern slopes of the Rockies in Montana, Wyoming and Colorado to the western and central parts of the Dakotas, Nebraska and Kansas during Thursday," AccuWeather Senior Storm Warning Meteorologist Eddie Walker said. 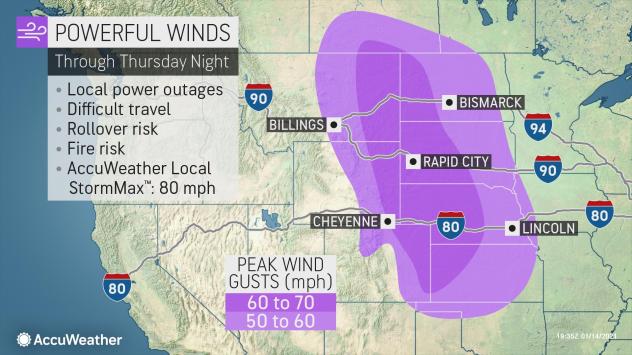 "Gusts between 30 and 50 mph will ramp up farther to the east from Thursday to Friday within the snow area on the Plains and Upper Midwest, west of the Great Lakes. This can create blizzard conditions due to blowing and drifting of snow on the ground," Walker said.

The strongest winds will remain west of the Mississippi to the eastern slopes of the Rockies on Friday. 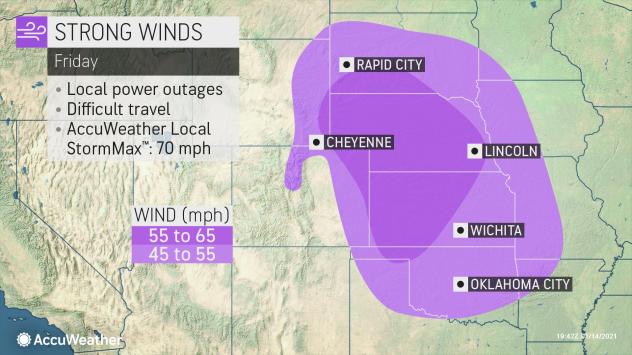 The combination of gusty winds and colder air moving in with the storm can take a lot of heat away from roads and sidewalks at a fast pace. This flash freeze-up can make driving and walking especially dangerous due to the rapidly changing weather conditions from Thursday to Friday. 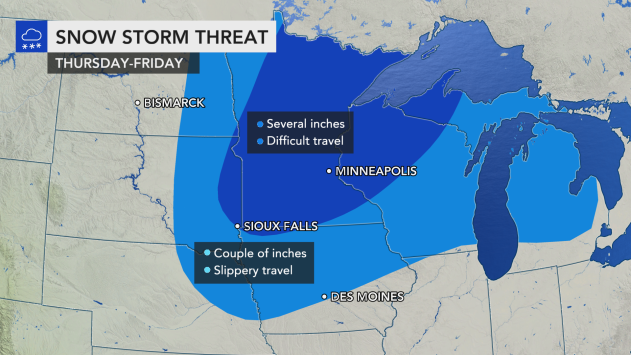 Very windy conditions are forecast to persist farther west over the Plains and eastern slopes of the Rockies into Friday.

The hidden dangers of drinking hot beverages
How to stop glasses from fogging up while wearing a mask in winter
‘Professor Popsicle’ explains mindset is critical to enduring cold
DC to dodge weather ghosts of Inauguration Days past
When will the polar vortex send Arctic air? It's complicated.

As the colder air begins to pass over the relatively open waters of the Great Lakes, lake-effect snow bands are likely to develop. The exact alignment and persistence of these bands will determine the amount of snow that falls from location to location. Since the air coming in is not tremendously cold, lake-effect is not likely to be intense, but only a small amount of snow can make for slippery and dangerous travel.

Very cold air aloft can allow for snow showers to develop and wander well away from the lakes and occur in some areas that typically do not experience lake-effect snow.

The eastward progression of the cold air associated with the storm is likely to be delayed a bit along the Atlantic Seaboard. However, a storm moving northward along the leading edge of the cold air may be able to bring rain that changes over to snow across part of the interior mid-Atlantic and New England.