A surge of warm air from the Plains and Mississippi Valley to the East Coast is expected to create temperatures 15-25 degrees above normal for this time of year.

Autumn weather so far has led to whiplash for millions of Americans who live across the Central and Eastern states, it’s no wonder. AccuWeather forecasters say that a trend in the coming weeks may lead many to scratch their heads and wonder what season it is anyway. A developing weather pattern will favor well-above-average temperatures and most likely a lack of snow for much of the eastern two-thirds of the nation that could last until the official start of winter on Dec. 21 and beyond.

The pattern could play Grinch and put a frown on snow-lovers' faces in much of the Central and Eastern states in the weeks leading up to Christmas. But, at the same time, those battling costly heating bills and a tight budget due to high gasoline prices may get a break. Temperature departures above normal are likely to reach 20 degrees Fahrenheit or more and even challenge record highs on multiple days. Normal highs in the 20s, 30s and 40s will be swapped with highs in the 50s, 60s and 70s. 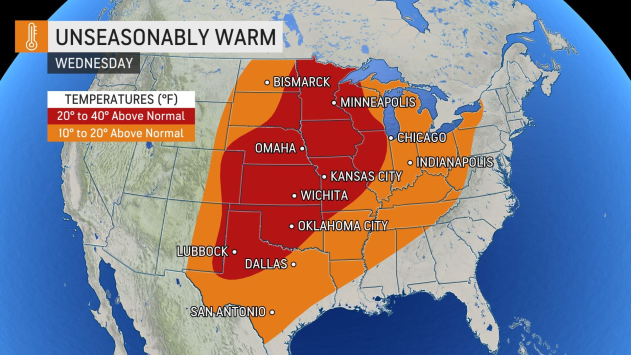 A southward dip in the jet stream will be a frequent visitor to the West, while a northward bulge in the jet stream will spend a lot of time in the East during the next couple of weeks. The setup will allow storms to dive southward along the Pacific coast, push across the Rockies then swing northeastward toward the northern Plains and upper portion of the Great Lakes. Ahead of that storm track, warmth will surge across much of the nation.

With cold air typically aligned north of the jet stream and warmth to the south, snow is likely to remain practically non-existent from the southern half of the Plains to the Ohio Valley, mid-Atlantic, southern New England and central Appalachians over the next couple of weeks or so, AccuWeather Senior Meteorologist Tyler Roys explained. 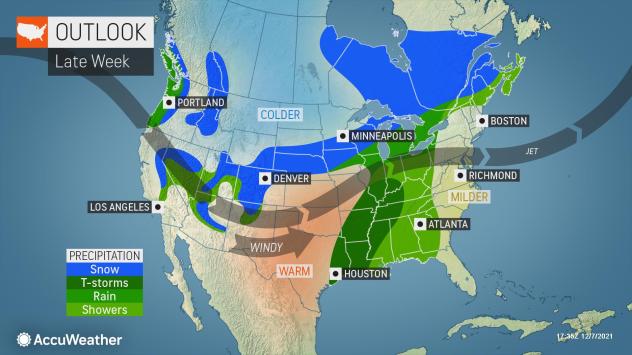 A major storm that took shape over the Four Corners region of the West on Thursday and is forecast to ride northeastward toward the Great Lakes on Friday may be mimicked one or more times in the coming weeks.

The circulation around the storm will pump warm air northward across the Plains and Mississippi Valley first then across the Appalachians and East Coast next.

AccuWeather is projecting record-challenging warmth on Friday in cities such as St. Louis, Indianapolis, Oklahoma City, Dallas and Nashville, Tennessee. In St. Louis, the record of 73 F that has held for Dec. 10 since 1889 could be matched or broken. Temperatures will climb into the 70s in Oklahoma City and Nashville with a high in the 80s for Dallas, meteorologists say.

Warmth will reach the eastern Great Lakes region during Friday night and early Saturday. The record of 61 set way back in 1899 in Buffalo, New York, may be topped, along with the record of 64 set in 1931 in Cleveland. 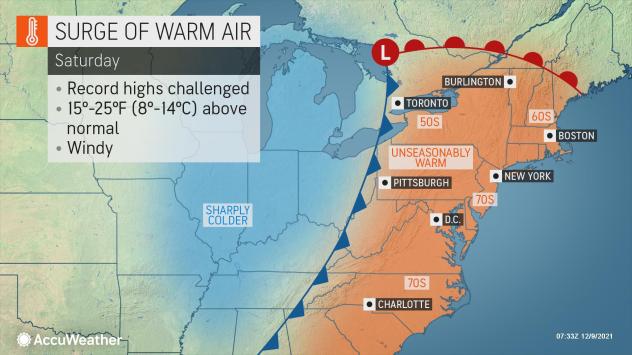 During Saturday afternoon, highs in the 60s and 70s will be common in the coastal mid-Atlantic and part of New England. In New York City, a record that has held for 142 years on Dec. 11 may be challenged. A high of 64 is predicted, a benchmark that has stood for the date since 1879. Record daily high temperatures last reached in the 1970s may be rivaled in Philadelphia, Washington, D.C., and Baltimore. In Trenton, New Jersey, and Reading, Pennsylvania, highs on Dec. 11 in the mid-60s were last felt 110 years ago, in 1911, and could once again be realized.

Even though the warmth will be chopped down in the wake of the storm's cold front from west to east on Saturday and Sunday in the Central and Eastern states, the next big wave of warmth is forecast to build soon thereafter over the Plains and expand eastward as a new storm will roll from the West into south-central Canada next week.

But, how long can such a pattern last?

It appears the chances of a white Christmas may drop a bit more over a large part of the Central and Eastern states but may increase in the West.

"The pattern looks to remain quite mild in the Plains, Midwest, mid-Atlantic and the Southeast during the period from Dec. 18-22," Roys said and added that the continued action of storms moving across the Western states would pull mild Pacific air over the Plains, where it would be subject to additional warming. The same pattern would bring plenty of moisture with opportunities for rain in low elevations of California and at the same time would help to build the snowpack over the mountains of the West. 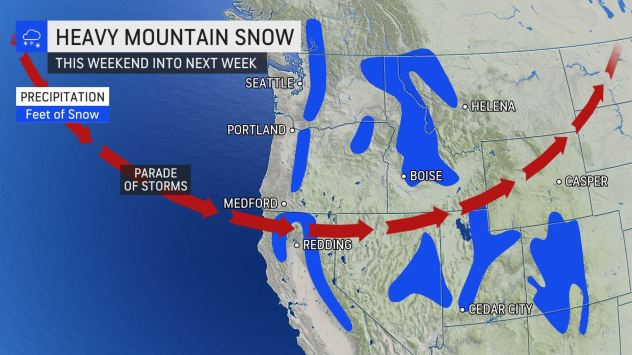 There can still be some brief southward intrusions of cold air into the Central and Eastern states through mid- to late December, so the entire two- to three-week period may not be mild or warm, but warmth may still dominate in the region up to close to Christmas, Roys explained.

"Should the polar vortex shift eastward across Canada during the fourth week of December, the door may open for more persistent colder, snowier conditions, especially near the Great Lakes region around Christmastime as our long-range forecast from back in October suggested," Roys said.

The polar vortex is a large Arctic storm that tends to hold back extremely cold conditions, like a vault over the North Pole, when it remains strong. When the polar vortex weakens, the door may open for frigid air to spill southward. But, when the vortex shifts position and still remains strong, it can help to direct moderately cold air southward to different parts of the United States.

AccuWeather's long-range team is exercising caution with predicting a full-blown southward outbreak of cold air from Canada that far out as the northward storm track in the East later this week and next week could still remain dominant through the end of the month. Until then, and perhaps longer across much of the Northeast, those who rely on extra revenue for snowplowing operations and the skiing industry could feel the pinch, while mild conditions and a lack of snow may help boost in-person shopping at retail stores leading up to Christmas.

Temperatures so far this autumn have been like a see-saw in the Central and Eastern states. Well-above-average warmth dominated in October, followed by near- to below-average temperatures in November. Thus far, December has been on the warm side with the first nine days of the month bringing above-average temperature departures of 1.2 degrees, 2.6 degrees and 5.9 degrees for New York City, Chicago and Atlanta respectively. And, indications are that the positive temperature departures for these cities and many others in the Central and Eastern states will increase in the coming weeks.