The Great Lakes region and portions of northern New England will continue to receive rounds of lake-effect snow before the next punch from the wintry, stormy pattern arrives next week.

Mother Nature can’t seem to make up her mind as to whether it is autumn or winter in the Northeast. Despite the winter solstice being less than three weeks away, Americans living in different parts of the country may even have a different opinion of which season seems to be unfolding. AccuWeather forecasters say that more of the same is on the way, and that it may feel like a roller-coaster ride of weather into next week. Buckle up and read on to see what’s on tap for the first weekend of December and beyond.

After temperatures flirted with almost springlike warmth on Thursday, as highs ranged from the upper 50s to low 60s F, people who live in areas from Boston to New York City will experience high temperatures hovering right around normal — give or take a few degrees — this weekend. During the first week of December, highs typically range from the mid-30s F in northern Maine to the mid-50s around the Chesapeake Bay. In New York City, Boston, Pittsburgh and Philadelphia, highs tend to average in the mid- to upper 40s.

As seasonably chilly weather dominates most areas over the weekend, a couple of quick-hitting storm systems are expected to spread winter weather into parts of the northern tier.

Next, a much stronger clipper storm will roll eastward along the U.S./Canada border. AccuWeather forecasters say the storm will arrive as early as Sunday impacting the region into early next week, bringing the potential for 6 to 12 inches of snowfall along a lengthy stretch from northern North Dakota to northern Minnesota and northern Michigan. However, not much snow will make it southeastward into the Northeast; rather the heaviest snow will fall across central parts of Ontario and Quebec due to a northward shift in the jet stream.

But, meteorologists say not to get too used to the taste of winter, as warmth that has been dominating across much of the lower 48 states will make a brief appearance in the region early next week. 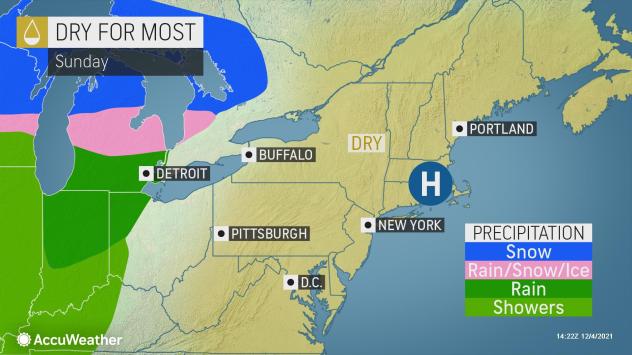 The second and stronger clipper storm allow warm air to surge northward through the Northeast states thanks to gusty southerly winds early next week.

"Even though most daily record highs may be out of reach on Monday in the region, highs of 10-20 degrees above average are anticipated," AccuWeather Senior Meteorologist Bob Smerbeck said, adding that highs well into the 50s and 60s will be common in the Northeast with some locations likely to near the 70-degree mark in the mid-Atlantic region. 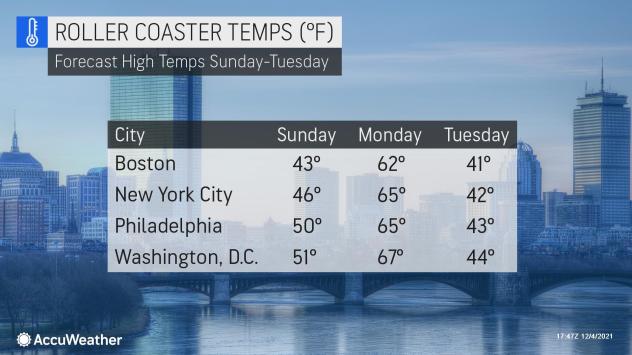 The surge in warmth along with gusty winds and drenching rain on Monday will cause the snow cover from northwestern Pennsylvania to western and northern New York state and northwestern New England to dwindle -- a change that may only be temporary.

"A strong cold front will cross Northeast states on Monday,” AccuWeather Senior Meteorologist Dave Dombek said, and it will bring some “dramatic” weather changes along with it. Several ingredients will come together to ignite tumultuous weather conditions. A strong jet stream will be overhead as warm air ahead of the front clashes with much colder air surging in behind it. Damaging wind gusts, torrential downpours and even thunder and lightning could all unfold due to the atmospheric setup. 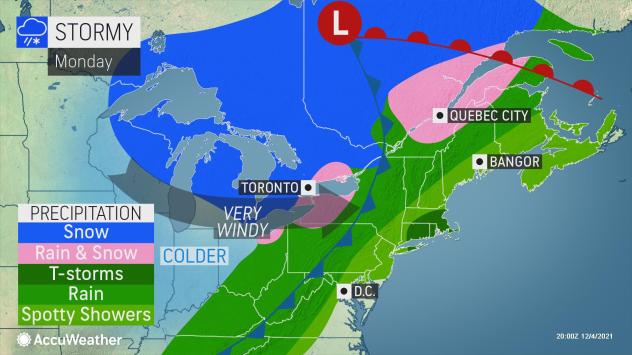 "There may be severe thunderstorm warnings for high winds, but it is conceivable that most of the 'storms' have no thunder and lightning with them on Monday," Dombek said.

Gusts reaching 15-30 mph are likely ahead of the front and in its wake, but the strongest gusts reaching 30-50 mph are most likely with the frontal passage. Locally higher gusts can occur over some of the mountains in the region and nearest open bodies of water.

Downpours may be brief, but sudden and intense where they do occur. The greatest chance of strong gusts and downpours will be during the morning and midday hours on Monday over the central Appalachians and eastern Great Lakes region then the mid-Atlantic and New England zone during the afternoon and evening.

The weather will vary significantly from location to location, but shifting strong winds alone can lead to considerable turbulence for airline passengers, difficult travel for trucks and trailers and the potential for airline delays. 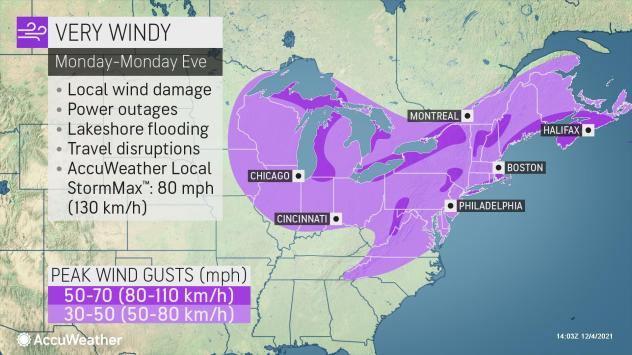 Then, temperatures will plummet in the wake of the front. In some cases, temperatures may crash by 20-30 degrees in an hour or two from the 50s to the upper 20s and lower 30s, especially over the Appalachians, on Monday.

As cold air charges in behind the front, it may catch up to the moisture and lead to a brief period of accumulating snow and slippery travel in parts of West Virginia, western Maryland, western and northern Pennsylvania, western, central and northern New York state and northwestern New England spanning Monday into Monday evening.

"The air coming in behind the front is not wickedly cold for December, but it could be cold enough to cause additional wintry trouble," Dombek said. 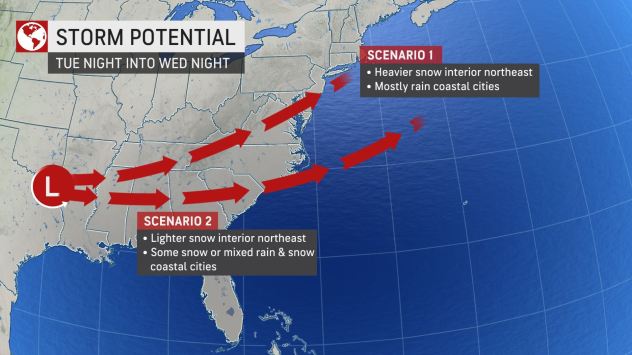 The cold will arrive ahead of a potentially fast-moving storm for Tuesday night and Wednesday, which could pack wintry tricks up its sleeves for some areas.

"There has been an indication for a few days now that a storm will organize over the South Central states and run quickly to the Northeast, but more recently that storm has the look that it may be less likely to cut toward the Great Lakes," Dombek said and explained that instead, it could travel close enough to the Atlantic coast to allow a period of accumulating snow from parts of the central Appalachians to central and northern New England.

Either way, it is unlikely to bring snow to the Interstate-95 corridor of the mid-Atlantic and southern New England as the air is just not cold enough. On top of that, Atlantic Ocean water temperatures will still be well above freezing, in the 40s and 50s off the coast of the Northeast, during the middle of next week, which will reduce the likelihood of wintry precipitation along the coast.

"Depending on the track of the storm, there is a chance of a period of accumulating snow as far to the southeast as the Poconos and the hills in northern New Jersey to the Hudson Valley of New York state, western Massachusetts and northern Connecticut on Wednesday," Dombek said.

Along the I-95 corridor, a period of drenching rain is likely on Wednesday that could lead to ponding on some of the streets and highways and travel slowdowns in general.

Should the storm end up tracking well to the north, snow might be so brief as to prevent an accumulation from the central Appalachians to central New England -- and it's possible snow may not materialize in the first place. With a track that far to the north, snow will be most likely to fall across the northern tier of the Northeast and adjacent areas of Canada.

AccuWeather will continue to provide updates on the impact of the strong cold front slated for Monday and potential wintry impacts for a midweek storm in the coming days.