Heavy snow could be seen blanketing parts of the South and mid-Atlantic one day after a sneaky storm left nearly 1 million without power, caused at least two deaths and produced a host of travel disruptions.

AccuWeather's Jillian Angeline was live on the AccuWeather Network as a winter storm blasted Washington, D.C., on Jan. 3.

A dramatic weather pattern change marked the first days of 2022 across the Southeast and mid-Atlantic, replacing the 80-degree warmth in some locations with an all-out snowstorm. The onslaught of the first accumulating snow of the season for many nearly shut down several cities along the East Coast, snarled traffic, left nearly 1 million without power Monday and has been blamed for at least two fatalities, according to officials.

The storm unleashed hefty snow amounts across parts of the eastern United States, with accumulations climbing to 14.6 inches in Glendie, Virginia, and 11 inches in Swiss, North Carolina. By Monday night, Huntingtown, Maryland, reported 15.5 inches of snow and Bell Buckle, Tennessee, received about 9 inches of snow. Even areas as far south as Alabama were hit with a blast of wintry weather, and Moores Mill, Alabama, picked up 7 inches of snow -- more snow than New York City (Central Park), Philadelphia and Boston have reported all season combined. 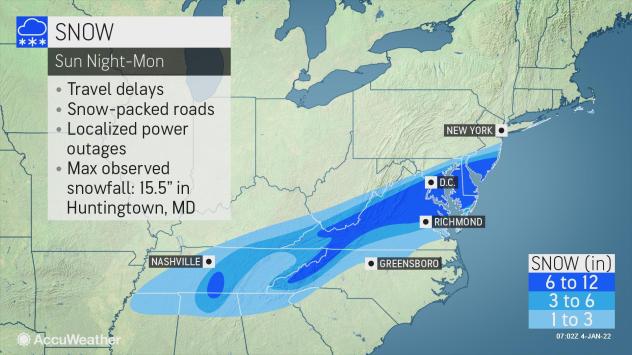 Blount County Sheriff's Office in Tennessee confirmed with AccuWeather National Reporter Bill Wadell on Monday that a 7-year-old girl was killed after a tree fell on a rental cabin near Townsend, near the Great Smoky Mountains National Park, during the morning hours. Officials are still investigating the cause of the girl's death but said weather likely played a role. According to the sheriff's office, heavy snow was sticking to the trees, and numerous reports had been called in about snow-covered trees crashing down throughout the day.

A second fatality was reported in Georgia by officials with the DeKalb County Fire Department on Monday. A 5-year-old boy died after a tree fell on a home in the county around 5 a.m., local time. DeKalb Fire Department spokesman Capt. Daniels told Channel 2 Action News that the recent wet and windy weather contributed to the falling tree.

"All the rain that we've been having, the ground has been really soft," Daniels said. He added that the tree had split the house in half, making it difficult to retrieve anyone inside.

Later on Monday, a deadly crash killed three people in Montgomery County, Maryland, after a vehicle and snowplow collided. The crash occurred just before 7 p.m. local time and shut down part of Columbia Pike. An investigation was underway Monday night, and drivers were advised to use other routes.

The scene across Birmingham, Alabama, on Monday was a complete 180 from the weather the city experienced over the weekend. The city had kicked off New Year's Day with a high temperature of 80 degrees, but just a day later, the temperature had plummeted to 35 degrees and was accompanied by snow and gusty winds Sunday evening into Monday.

Snowstorm leaves more than half a million without power

Meanwhile, Philadelphia largely missed out on the snowfall. The Philadelphia International Airport only reported 0.5 of an inch of snow by Monday afternoon, with surrounding areas largely reporting less than 4 inches of snow. All the same, early-bird customers of the supermarket Giant in Center City, a district in Philadelphia, reportedly cleaned out the bread aisle as well as most of the eggs. By Tuesday morning, the airport had only measured an inch of snowfall within the past 48 hours.

"This is turning out to be one of the top 5 winter storm[s] in Dominion Energy Virginia history," the energy company's media relations manager Rayhan Daudani said over Twitter Monday evening. "Going to be a tough restoration with cold temperatures and pockets of severe damage but our crews are working around the clock to restore power as safely and quickly as possible."

Temperatures Monday night dropped into the 20s and teens across Virginia where hundreds of thousands of power customers were in the dark. People relying on generators should make sure to have proper ventilation to avoid carbon monoxide poisoning. Prolonged power outages could also raise the risk of pipes bursting amid the low temperatures.

More than 2,800 U.S. flights and more than 4,400 worldwide were grounded by midday Monday, according to tracking service FlightAware. Another 10,158 flights were delayed, including 4,000 in the U.S. as inclement weather continued to overwhelm airports already strained by COVID-19 impacts. Atlantic City Airport in Egg Harbor Township, New Jersey, closed after more than 9.5 inches of snow fell. The airport later reopened around 9 p.m., local time. Atlantic City ended up receiving a new daily record of 13 inches of snow Monday. This smashed the previous daily snowfall record of 2.8 inches from 2014.

New Jersey Gov. Phil Murphy had issued a state of emergency for five southern New Jersey counties on Sunday night. “Residents should stay off the roads, remain vigilant, and follow all safety protocols,” Murphy said on Twitter. During the evening hours as the storm drew to a close, he added that the state of emergency would remain in place for the impacted counties.

The snow came down at a quick pace across Virginia, and the wintry precipitation was heavy enough to cause thundersnow in parts of the state Monday morning. The heavy snowfall was also enough to cause a dizzying number of crashes. 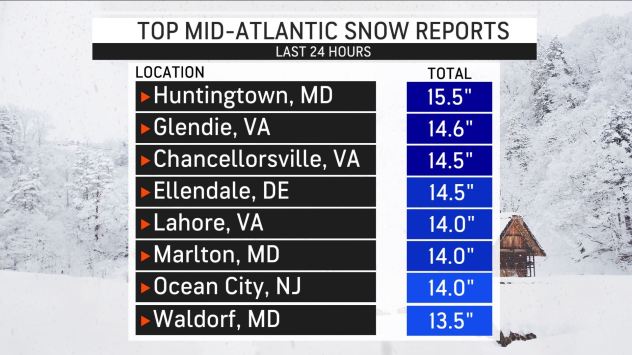 On Monday night, Interstate 95 in Virginia was closed in both directions in the Fredericksburg area due to disabled vehicles and downed trees. Multiple incidents were reported by the Virginia Department of Transportation (VDOT). Just before midnight, VDOT updated that 20-30 trucks were stuck near the Matta River area of I-95, and drivers replied that they had been stuck in traffic for 8 hours. Several of those stuck in this traffic took to social media to request help, saying they were without gas, heating, food or water for over 12 hours in freezing temperatures. Among those stuck in the traffic was Sen. Tim Kaine (D-Va.).

Over Twitter, he stated that he had started his normally two-hour drive to D.C. at 1 p.m. on Monday, only to still be on the interstate 19 hours later.

"I'm still not near the Capitol," he wrote, adding that his office was in touch with VDOT to help others in the same situation.

The temperature had climbed into the 60s on the first two days of the new year in the nation’s capital before nosediving Monday. AccuWeather National Reporter Jillian Angeline captured snow creating almost whiteout conditions as it stuck to roads and created slick travel conditions in Washington, D.C.

The DC health department canceled all COVID-19 testing for Monday due to the snow emergency, and the Washington Metropolitan Area Transit Authority temporarily suspended services due to the weather conditions. The snow also forced the closure of all Smithsonian museums in the D.C. area, including the National Air and Space Museum.

President Joe Biden battled strong winds and heavy snow as he deplaned Air Force One at Joint Base Andrews in Prince George’s County, Maryland, shortly before 11 a.m., returning from spending the weekend in Delaware. According to CNN reporter Kaitlan Collins, snowplows were needed to clear the runway in order for the aircraft to land safely. Collins also reported that the presidential motorcade encountered some “difficulty” driving back to the White House amid the storm.

Correction: A photo caption in this story previously misspelled the name of a coastal New Jersey town. Snow was falling in Wildwood, New Jersey. Not Wildwoods.