Crews finally free all motorists stranded in I-95 traffic jam

Some drivers were stranded on the interstate for more than 24 hours after a major snowstorm brought traffic to a standstill in Virginia, but by Tuesday evening, the highway was finally cleared.

Hundreds of driver stuck for hours on I-95

Impacts continued to be felt in the Mid-Atlantic on Jan. 4, after a winter storm blasted the region on Jan. 3.

Hundreds of drivers, including a U.S. senator, were stranded along a roughly 50-mile stretch of Interstate 95 in Virginia on Tuesday after a major snowstorm hammered the mid-Atlantic.

The gridlock was finally cleared by Tuesday evening when the Virginia Department of Transportation (VDOT) said in a post on Twitter that "there are no people stranded still on I-95." By 8:40 p.m. EST Tuesday, both northbound and southbound lanes were open after crews were able to remove disabled vehicles that were abandoned during the snowstorm.

The VDOT said fallen trees on adjacent and secondary roadways had been slowing crews from reaching the stretch of I-95 that had been shut down.

The early-week snowstorm that turned deadly and disastrous for thousands of people also seemed nearly endless for a few hundred drivers on I-95 in Fredericksburg, Virginia, Monday night. Hundreds of motorists were stranded overnight as "disabled vehicles and downed trees" left large swaths of the interstate inaccessible. U.S. Senator Tim Kaine of Virginia was among the motorists stranded on the interstate.

AccuWeather forecasters warned about the potential for heavy snow and the impact the storm could have on travel in and around the nation's capital, AccuWeather Chief Meteorologist Jon Porter said.

“Our concern on highways was increased since this was happening during or just after the heart of the Monday morning commute, which is always challenging," Porter said. "But this incident carried the additional weight of being the first commute after the holidays combined with the first major snow event of the year, so drivers would not be as used to winter-ready driving.”

“The AccuWeather forecast of 6-10 inches in the Washington, D.C. area, much of Virginia and other surrounding areas issued on Sunday morning provided pinpoint accuracy as 6-10 inches was observed over the area," Porter continued, adding that "other sources were forecasting much less snow."

Porter said the concerns over those snowfall amounts combined with rapid snowfall rates drove forecasters to use strongly-worded messaging. "More than 24 hours in advance, we added special descriptions into our forecasts, saying, 'rapidly worsening travel conditions with low visibility and slippery roads,' and on Monday morning, 'heavy snow can lead to major travel delays and power outages.'"

For some motorists, like Susan Phalen, the gridlock meant she was sitting for more than 10 hours in frozen traffic in the frozen tundra that was the year's first major snowstorm for the region.

"Heat is on and I've got plenty of gas," Phalen said on Twitter as she documented the experience. "But most of the 'gas' is coming from the four small YorkiPoos trapped in this car with me. Poor pooches have very full bladders."

Shortly before 9 a.m. EST Tuesday, Phalen posted a video update to Twitter as traffic finally began to move. "After over 11 hours of not moving an inch, I-95 NB is crawling forward," she wrote. "Any movement is exciting at this point."

An hour later, Phelan was still moving slowly, but had traveled far enough to declare on Twitter that she'd just driven "out of a fresh level of hell." And just after 11 a.m., Phelan posted video showing her car cruising along the northbound lane headed out of the traffic jam, though over in the southbound lane, gridlock remained.

According to the VDOT, much of the blame for the delay, which began Monday afternoon as heavy snow fell, could be placed on multiple trucks that had crashed on the snow- and ice-packed interstate. All of the chaos on the interstate occurred near Fredericksburg, Virginia, roughly 60 miles outside of Washington, D.C.

"This is unprecedented, and we continue to steadily move stopped trucks to make progress toward restoring lanes," VDOT Fredericksburg District Engineer Marcie Parker said in a statement early on Tuesday.

Near Centreport Parkway, a crash involving six semi-trucks at noon Monday forced all the southbound lanes of I-95 to close, NBC Washington reported, contributing to the miles of backups.

Among the hundreds of stranded motorists was U.S. Sen. Tim Kaine of Virginia. Kaine said on Twitter that his normal two-hour drive from Richmond to D.C. turned into a far wilder adventure than normal.

“Nineteen hours later, I’m still not near the Capitol,” Kaine remarked on Tuesday morning. By late-afternoon, Kaine finally arrived in Washington, D.C. "After 27 hours on the road from Richmond to DC, very happy to be back in the Capitol." 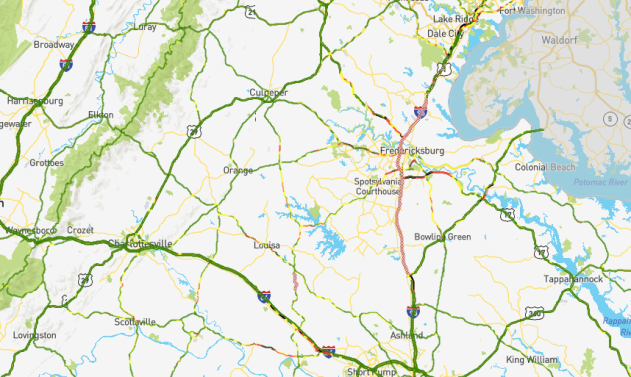 This map from the Virginia Department of Transportation shows the impacted stretch of I-95. (VDOT)

AccuWeather National Reporter Jillian Angeline spoke with multiple stranded drivers, including Alex Smith, a woman who found herself stuck on the freeway for hours even after she tried to take an exit. Smith, who was driving through Virginia from North Carolina, was shocked by the road conditions.

“[The roads were] perfect all the way here until we hit Fredericksburg, then it was like the roads weren’t plowed, it was like we just hit this city line where there was just no salt, no nothing,” she said. “Everyone was trying to get off at exits, but the gas stations and the hotels are not plowed, so people were getting stuck just trying to turn into places, so everybody just got back on the highway, because what else are you going to do?”

After trying to get off an exit ramp herself, Smith found herself on a back road that she said she “shouldn’t have been on” before she bottomed out and got stuck.

“But, thank God, three guys jumped out who didn’t speak English but the only thing they could do was get me out of there and luckily they were plowing that backroad, so all I could do was go straight back to I-95,” she said with a chuckle. “I thought ‘Well, it may take me a couple more hours, but at least I’ll be safe on the freeway.’ But then we completely stopped.”

The stranded motorists also turned to each other in their times of early-morning needs, as stories have emerged of drivers helping others. Jean-Carlo Gachet, a trucker who said he was stuck on I-95 since 1 a.m., shared that his truck was stocked with food and water, according to CNN.

Gachet left Rhode Island at 5 p.m. Monday and was en route to Georgia when the snowstorm snarled his plans. Mid-Tuesday morning, he shared on Twitter that he gave a fellow stranded driver a warmed breakfast.

This car has been sitting near me since 1am (I-95 closure). Least I could do was offer them a microwaved breakfast pic.twitter.com/ItA3SKR7pc

As the night wore on, dozens of tractor-trailers were left disabled in the snowy conditions, blocking all lanes of traffic.

With cleanup and removal efforts complicated by the snowstorm, the backup became longer and longer as Monday night became Tuesday morning. As cars and trucks had run out of gas, Virginia State Police have said that the major interstate was closed so crews could safely reach stranded motorists.

"In addition to clearing the trucks, we are treating for snow and several inches of ice that has accumulated around them to ensure that when the lanes reopen, motorists can safely proceed to their destination," Parker said.

Snow was falling heavy on I-95 near the Rappahannock River in Virginia, a stretch that would soon be completely halted by tractor-trailer accidents. (Twitter/VDOT Fredericksburg)

While drivers like Phalen managed to make it through the night safely with enough fuel, that wasn't the story for all.

“We’re really worried about our access to food, water and sanitation at the moment,” she said. “I know some people are starting to get worried about gas.”

The winter storm brought heavy snow, which totaled a foot or more, to multiple states including Virginia, Maryland, Delaware, and southern New Jersey. Virginia seemed to bear the brunt of the storm's wrath, with several places racking up more than 12 inches of snow, the nightmare that unfolded on a section of I-95 and widespread power outages.

At one point on Monday, close to 450,000 customers had power knocked out by the storm. By Wednesday morning, some 180,000 customers in Virginia remained without power, according to PowerOutage.us, with temperatures in the upper 20s and lower 30s.

Tracking potential for another snowstorm to hit Midwest, Northeast