Tracking potential for another snowstorm to hit Midwest, Northeast

As one winter storm impacts the East on Monday, forecasters are already monitoring a possible storm that could unfold later this week.

As parts of the mid-Atlantic were dealing with the first significant snowstorm of the season early this week, AccuWeather meteorologists were busy monitoring the potential for yet another winter storm that is expected to take shape and aim at areas from the Midwest to the Northeast late this week. This next storm brewing has the potential to bring snow to areas that were missed by the early-week storm from the Ohio Valley into the Northeast, and there is a possibility for more snow to reach portions of the Interstate 95 corridor.

“I’m convinced there will be a storm Thursday into Friday,” AccuWeather Chief On-Air Meteorologist Bernie Rayno said, adding that there remains some uncertainty in its exact track at this point.

Snow could spread from the Midwest into the Northeast Thursday night into Friday, he added, explaining that the storm is most likely to track up the East Coast. A storm path that far to the west would unleash snow over areas west of the I-95 corridor — and the interior mid-Atlantic and New England would be in for a dose of wintry weather. That scenario would also spell a stronger storm system.

But, AccuWeather forecasters were still weighing a range of scenarios, with the opposite extreme taking a weaker storm straight east and out to sea from the mid-Atlantic. In that setup, some snow could spread across the mid-Atlantic, potentially including in the nation’s capital. Philadelphia, Baltimore and Washington, D.C., could all get snow if that projection plays out, Rayno explained.

A fresh injection of cold air behind a cold front that will stall from the Midwest to the mid-Atlantic along with jet stream energy will come together to cause the new winter storm to develop.

The atmosphere already began to change gears toward a more typical winter weather pattern over the central United States this past weekend in the wake of a cross-continent storm that forced the jet stream and associated colder air farther to the south. People who live in the East were experiencing that transition on Monday as temperatures were some 20-40 degrees lower when compared to the New Year’s weekend and as heavy snow fell from western North Carolina and Virginia to Maryland, Delaware and southern New Jersey.

Even as heavy snow caused big travel problems and power outages along the mid-Atlantic coast on Monday, snow from the storm managed to avoid much of the Ohio Valley, central Appalachians and New England.

“West of Interstate 95, get ready, as there is snow on the way,” Rayno said of the upcoming late-week storm. “All the ingredients are there for a storm to form, including a fresh injection of cold air.” 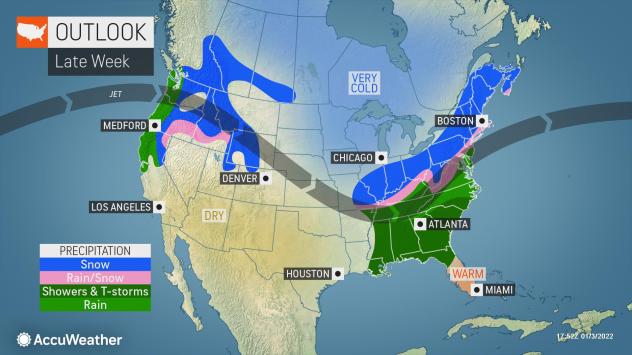 A midweek Alberta clipper storm will help set the stage for the larger storm later this week. That clipper storm will bring generally light snow from the northern Plains to the Great Lakes region on Wednesday and interior Northeast Wednesday night — and it will usher in a fresh burst of cold air in its wake.

It is what will follow the clipper storm that has AccuWeather meteorologists' attention.

"A storm will move out of the Rockies at midweek and take a track much farther to the south over the Central states, thanks to the clipper storm's fresh push of cold air," AccuWeather Meteorologist Brandon Buckingham said.

The storm will bring a period of snow and plunging temperatures from Colorado to parts of the central Plains from later Wednesday to Wednesday night.

One of two things will happen with the storm after its moves out from Arkansas on Thursday.

"The storm will either strengthen and track toward the coastal Northeast with heavy precipitation or remain relatively weak and take a more easterly path off the middle part of the Atlantic coast with generally light precipitation later Thursday night and Friday," Buckingham explained.

If the Thursday night to Friday storm remains relatively weak, then enough cold air would be present in the coastal Northeast for some snow to fall and perhaps cause slippery travel conditions along I-95 from Washington, D.C., to New York City, as well as portions of the Ohio Valley and central Appalachians.

Such a weak storm with a steady west-to-east track might limit or prevent snow from falling across much of New England and upstate New York.

A strengthening and northward-turning storm scenario, while not a 100% certainty, seems much more likely at this point, given the amount of jet stream energy coming in and a significant temperature contrast zone that will be present with cold air to the north and warm air to the south, Rayno explained.

It was a similar strong temperature contrast zone separating readings in the 20s and lower 30s F from readings in the 50s and 60s F that helped to fuel the snowstorm from Sunday night to Monday in the southern Appalachians and mid-Atlantic. 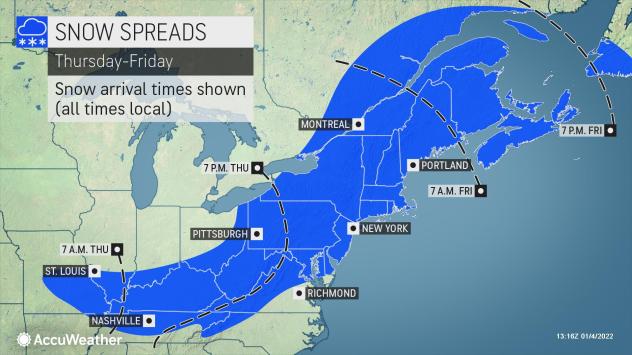 North and west of the center of the storm, where cold air holds on throughout the event, several inches of snow could fall and lead to difficult travel in parts of the Ohio Valley, central Appalachians and Northeast in this setup.

Little, if any, melting may occur on most roads in the snow zone with the late-week storm, and, as a result, road conditions may deteriorate rapidly as the storm begins.

Cincinnati will experience some snow for a time on Thursday that will continue early Thursday night with temperatures plunging from the mid-20s to the lower teens. Father east, Pittsburgh is likely to be well within the accumulating snow zone from the storm with temperatures projected to fall from the 20s Thursday afternoon to the teens Thursday night. Both these cities are expected to receive 1-3 inches of snow by the end of the event. 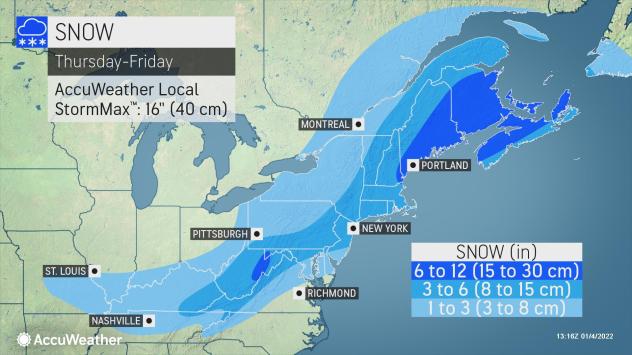 To the north in Albany, New York, snow is forecast to get underway later Thursday night and continue much of the day Friday with temperatures mainly in the mid-20s to near 30 throughout the storm. Albany can expect anywhere from 3-6 inches of snow from the storm.

"The zone from northeastern Pennsylvania to eastern upstate New York and northwestern New England appears to be most likely to end up with the heaviest snow from this storm at this time, factoring in when the storm may be at its peak intensity," AccuWeather Senior Meteorologist Brett Anderson said. These areas could be looking at accumulations upwards of 6 inches of snow, should the storm become intense and hug the coast in the Northeast.

Boston has a higher likelihood of experiencing winter weather when compared to I-95 cities farther to the south. Cold air may try to hold on longer and allow snow to fall at the beginning and end of the storm, rather than for precipitation to mostly come in the form of rain Friday, Rayno added. Forecasters are predicting 3-6 inches of snow total for Boston with the potential for more.

Even if mostly rain and/or only a small amount of snow falls from Philadelphia and New York City, travelers should expect delays and the potential for more flight cancelations due to limited staff, COVID-19 issues and displaced crews and aircraft. Currently, however, forecasters are anticipating 3-6 inches of snow in these areas through Friday.

AccuWeather meteorologists will continue to closely monitor the developing storm and its swath of wintry weather.

'That was scary': Teen pilot on epic journey slowed down by weather