The coldest air of the season so far will be on the move from northern Canada into the Midwest and interior Northeast, and as the air interacts with multiple storm systems, snow could develop.

The potential for storms along a cold front could mean the first snow of the season in the Northeast.

AccuWeather meteorologists are monitoring the potential for a pattern change that will usher in the coldest air of the season to parts of the central and eastern United States during the first week of November. The advancing cold air and development of storms could set up in such a way as to deliver the first snowflakes or even accumulating snow of the season across parts of the Midwest and Appalachians next week.

"Could we be talking about snow across parts of the Midwest and Northeast?” AccuWeather Chief On-Air Meteorologist Bernie Rayno asked during his Weather Insider podcast on Thursday. “Maybe.”

Cold air from northern Canada will be on the move this weekend and is expected to spread across much of the north-central U.S. next week.

From about the spine of the Appalachians to the Midwest, the air is likely to trend progressively colder next week. The extent of the cold air will determine where snow may fall, perhaps on more than one occasion, as storms develop and ride along the leading edge of colder air. 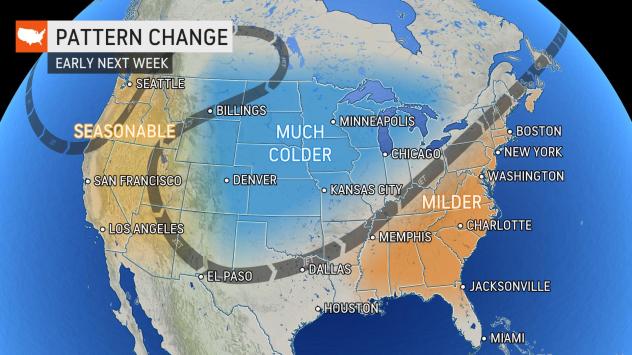 "This will not be Arctic air or recording-breaking cold that moves in, but it will be a change and cold enough for snow if the rounds of precipitation anticipated are steady and heavy enough,” Rayno explained.

The coldest air of the season will become established in the Midwest, and it could last longer than cold stretches have so far this autumn. Highs are expected to plummet into the 30s and 40s F on some days next week across a wide area of the North Central states, and nighttime lows will range from within a few degrees of freezing to as low as the 20s.

At the same time next week, an active storm track will set up from the central and southern Plains to the Ohio and Tennessee valleys and finally the central and northern Appalachians.

Since cold air tends to reside on the northern and western side of storms, determining exactly where that storm track will form will be key to where snow will fall. 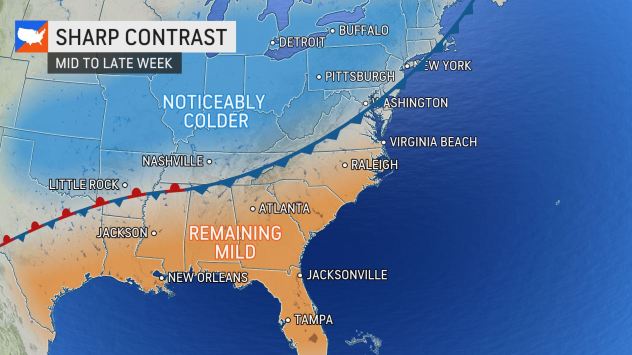 Two main storms will be watched as potential snow threats next week, according to AccuWeather forecasters. The precise timing of both is not set in stone as both storms were still over the Pacific as of Thursday.

The first of the two storms is predicted to roll from the Central states to the Northeast region at midweek. This storm is likely to be weak will not have much cold air to work with, so any precipitation associated with it is expected to be light and spotty in nature. This storm could trigger cold rain showers, rain mixed with a bit of wet snow or perhaps a period of rain that ends as a bit of wet snow across a corridor from Nebraska and northern portions of Kansas and Missouri to parts of West Virginia, northern and western Pennsylvania and northern New England.

The second and stronger of the two storms is likely to develop during the latter part of the week to next weekend. Because this storm may have more cold air entrenched, it has a better chance of producing somewhat heavier cold precipitation in the form of rain, a rain/snow mix or perhaps a period of accumulating wet snow. 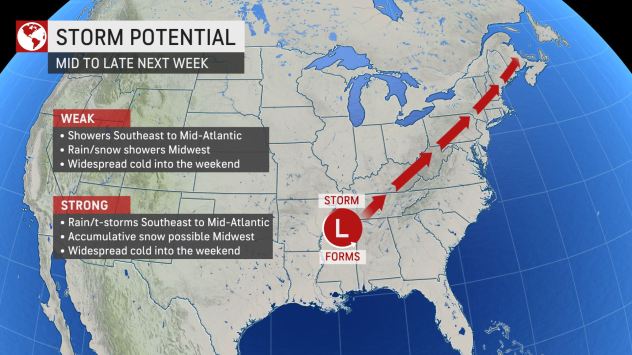 It's possible that the cold air will make it farther south into areas like the mid-Atlantic, but at this point, it seems like the boundary separating chilly air to the north and milder air to the south will set up a bit farther to the north, according to Rayno.

For example, in New York City, high temperatures are forecast to trend downward from the lower 60s this weekend to the middle 50s next week with nighttime lows in the 40s, which is well above the threshold for snow.

At this point, snowfall along and east of Interstate 95 from the mid-Atlantic through New England seems very unlikely to occur next week or next weekend. The most likely area for any accumulating snow or snowflakes will be across the Appalachians on west to Ohio, Rayno added.

If the late-week storm evolves into a heavy wet snow producer for parts of the Appalachians and Midwest, there is the state of the foliage to consider. Trees still bearing leaves will be more prone to falling under the weight of snow, and power lines could be downed as a result. 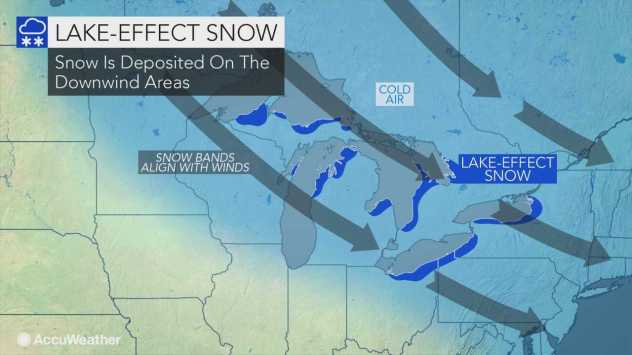 In the wake of storms, particularly the potentially bigger storm at the end of next week, reinforcing waves of cold air are likely to blast the Great Lakes region. As the cold air passes over the warm water of the Great Lakes, lake-effect snowfall is likely to develop over areas downwind of the lakes. Lake Erie's water temperature at Buffalo, New York, was 60.4 degrees Fahrenheit as of late October.

AccuWeather long-range forecasters first warned about the potential for an early-season snowstorm and lake-effect snowfall in the autumn forecast, which was released in early August.

The pattern is very amplified, as illustrated by the recent bomb cyclones that have affected the U.S. over the past week, and a pattern flip from unseasonable warmth to an early-winter chill from late October to early November should set the potential for snowfall into motion, according to AccuWeather Lead Long-Range Meteorologist Paul Pastelok. The cold air alone will make it feel more like an early winter pattern by the middle to the latter part of next week.