No rest for the snow weary: Another storm headed to the Upper Midwest

As bitter winds blow around snow from the storm that moved through earlier this week, another round of wintry weather is ahead for the Upper Midwest after the calendar turns to December.

As residents of the Upper Midwest dig out from a winter storm that brought several inches of snow on Tuesday, another is on the way later this week which will slow travel and have many reaching for their shovels again, AccuWeather forecasters say.

A general 4 to 8 inches of snow fell over the Twin Cities earlier this week. While that area will avoid the heaviest accumulations with the next round of snow, some folks in parts of the Upper Midwest and northern Plains will find themselves digging out from as much as 6 inches of snow come Friday night.

The most significant snow of the season so far for most in this part of the country started as a storm that brought a few inches of accumulation to the Front Range of the Rockies and central Plains on Monday night and Tuesday morning. Denver International Airport measured 1.7 inches of snow, bringing the November total there to 10.9 inches, more than twice the city's average snowfall for the month of 4.5 inches and making this November the snowiest one in the Mile High City since 2019 when 13.2 inches fell. 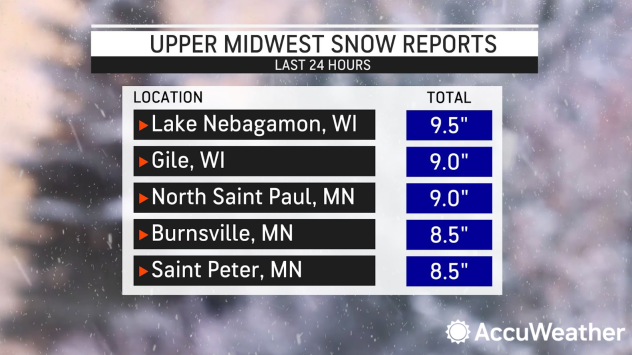 On Tuesday morning, as the storm picked up more atmospheric energy, snow began falling in the Twin Cities and came down heavy for a few hours during the midday and afternoon hours. As a result, many schools around the metro area instituted early dismissals, and a snow emergency was declared in both Minneapolis and St. Paul.

As the last flakes of the day were falling Tuesday evening, 8.4 inches was measured at Minneapolis-St. Paul International Airport, more than doubling the season-to-date total there. By Wednesday morning, the seasonal snowfall amount measured at the airport stood at 13.4 inches.

While most areas from northwestern Iowa into southern Missouri, northwestern Wisconsin and the western Upper Peninsula of Michigan were in the swath of heaviest snow totals averaging 4 to 8 inches, a few locales came in even higher. A total of 9 inches was reported near North St. Paul, Minnesota, and Gile, Wisconsin, while Lake Nebagamon, Wisconsin, led the pack with 9.5 inches, as of Wednesday morning.

Following the snow, bitterly cold winds arrived, complicating efforts to clear roads and shovel sidewalks. AccuWeather RealFeel® Temperatures stayed near or below zero in much of the Upper Midwest through Thursday morning.

The same storm that brought low-elevation snow to parts of the Northwest, including Seattle on Tuesday, will bring the next opportunity for snow to the northern Plains and Upper Midwest from Friday into Friday night. 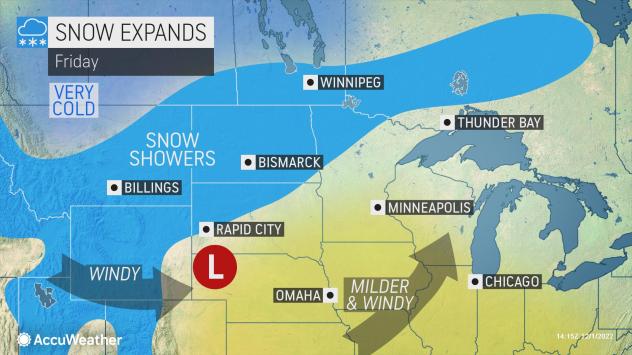 After bringing significant accumulations to parts of the Rockies on Thursday night, snow will spread over the Dakotas on Friday morning, before expanding into parts of northern Minnesota, northern Wisconsin and the Upper Peninsula of Michigan on Friday afternoon and evening. The last flakes will fall overnight Friday night, as bitterly cold winds whip up what snow has already fallen.

"The storm is expected to be relatively fast-moving and will not have a lot of moisture associated with it; despite that, it will still bring a round of accumulating snow," said AccuWeather Senior Meteorologist Adam Douty.

A general 1 to 3 inches of snow is expected for most, with a smaller area in far northern Minnesota forecast to receive 3-6 inches. This includes cities such as International Falls. That heavier band of snow will extend into Canada, as well, where localized totals of up to a foot (30 cm) are possible, AccuWeather forecasters say. 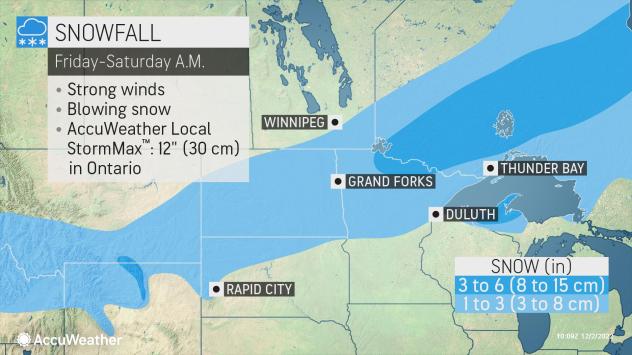 Since temperatures ahead of and during the next storm aren't expected to rise above freezing in much of the area, the snow will stick almost instantly to roads and sidewalks and slow the morning and evening commutes on Friday in parts of the Dakotas, and the evening commute in northern Minnesota. Residents in cities farther east such as Duluth, Minnesota, will experience most of their impacts during the nighttime hours.

South of the storm track, as warmer air briefly returns, winds are likely to howl from the interior West through much of the Plains into Friday night. Widespread gusts ranging from 40-60 mph are in store, but gusts in some cases can top 80 mph over the Rockies through the passes and across the adjacent High Plains. The winds can get strong enough to flip over trucks and significantly increase the wildfire danger. 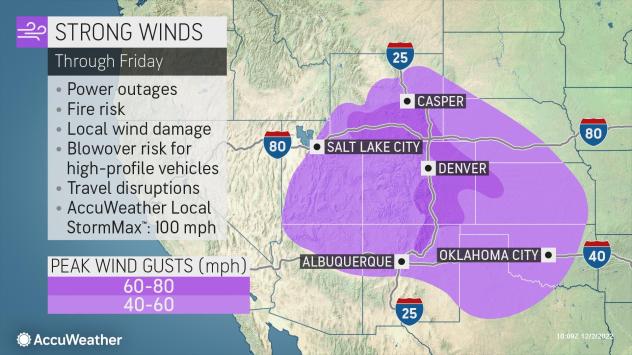 "In the wake of the storm, a strong cold wind will pick up across the area, leading to blowing and drifting snow," said Douty. When combined with lower temperatures, the blowing snow will make for a wintry scene in the region into Saturday, well after the last flakes have fallen.

In the longer range, AccuWeather forecasters expect additional rounds of snow and fresh cold air to move through the Upper Midwest through next week.