Frigid air, strong winds to have Midwest and Northeast shivering as December arrives

Much colder air will spread from the Midwest to the northeastern United States as a strengthening storm races across the Great Lakes and parts of Canada as November ends and December begins. AccuWeather meteorologists expect strong winds to accompany the colder air and a heavy but abbreviated lake-effect snow event to unfold as well.

Despite some substantial warm and cool swings during the months of September, October and November, the three-month period referred to by forecasters as meteorological fall has ended up close to average in terms of temperature from much of the Midwest to the mid-Atlantic and New England coasts. Meteorological winter will get underway on Dec. 1, while astronomical winter -- the official start of the season -- does not begin until Dec. 21.

Temperatures at the start of September were 5-10 degrees Fahrenheit above average in locations such as Chicago and New York City with highs well into the 80s. By the time Dec. 1 rolls around, temperatures will end up being a few degrees below average, thanks to a push of cold air that overtook much of the Midwest into Wednesday night and will spill from the Appalachians to the Atlantic coast Thursday. The typical high in Chicago is close to 40 degrees Fahrenheit, while the high in New York City is just shy of 50 F on Dec. 1.

Locally strong winds accompanied squally showers ahead of the push of cold air into Wednesday afternoon and continued to do so in New England for a time Wednesday evening.

Temperatures from Tuesday to Wednesday were slashed by a general 20-30 degrees Fahrenheit and even as much as 40 degrees in parts of the Midwest. Highs that were in the 40s, 50s and 60s in the Midwest from Tuesday were replaced by highs in the 20s, 30s and 40s Wednesday.

From Wednesday to Thursday, a temperature crash of 10-20 degrees, and in some places 30 degrees, is likely from the Appalachians to much of the Atlantic coast. 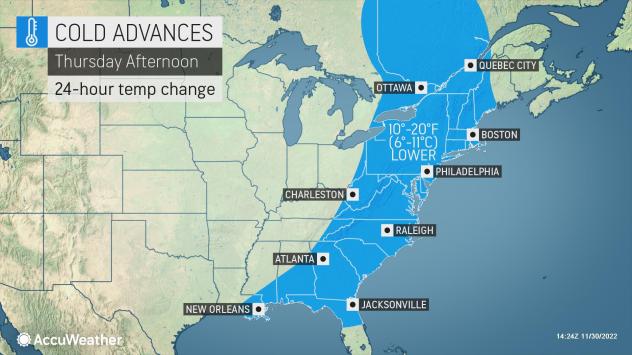 By Thursday morning, the air outside may feel like the middle of winter for some people in the Northeast. AccuWeather RealFeel® Temperatures will range from the single digits in parts of the central and northern Appalachians and around lakes Huron, Erie and Ontario, to the teens and 20s along the Eastern Seaboard.

The action of cold air passing over the open and relatively warm waters of the Great Lakes kickstarted the lake-effect snow machine on Wednesday over the Upper Midwest and in the Northeast beginning Wednesday evening. 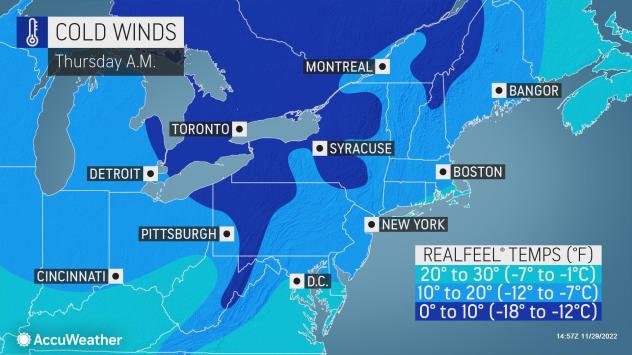 "Because of the brief nature of the cold blast and shifting nature of the winds associated with the cold outbreak, the duration of lake-effect snow will be much briefer with much less accumulation compared to mid-November," AccuWeather Expert Storm Warning Meteorologist Brian Wimer said.

In most cases, the period of lake-effect snow is likely to last a mere 12-24 hours instead of several days.

Off of Lake Erie, the heaviest snow is forecast to fall south of Buffalo, with several inches in store for the region instead of several feet as was the case during the blockbuster snow event in the middle of November.

"A general 3-6 inches is likely east of Lake Erie with the heaviest amounts of 9 inches expected in the ski country of western New York," Wimer said. "The heaviest snow in the eastern lakes is likely to be east of Lake Ontario, with a general 6-12 inches and locally 15 inches in the Tug Hill Plateau of northern New York." 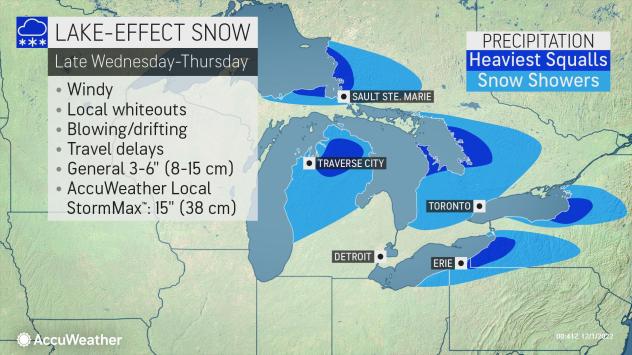 Wimer pointed out that winds will be rather strong during much of the lake-effect snow event in the Midwest and the Northeast.

"Snow showers could extend pretty far away from lakes," Wimer said. Most of the snow showers are not likely to produce much in terms of accumulation, but some that stream off of Lake Erie can reach the Catskills and the middle part of the Hudson Valley, he explained.

Meanwhile, snow showers off of Lake Ontario are likely to reach into the Green Mountains of Vermont and could leave up to a couple of inches.

Motorists traveling in the vicinity of the Great Lakes from Michigan and northern Wisconsin to northeastern Ohio, western, central and northern Pennsylvania and upstate New York should be aware of rapidly changing weather conditions that include a sudden drop in visibility and slippery roads as snow showers develop. 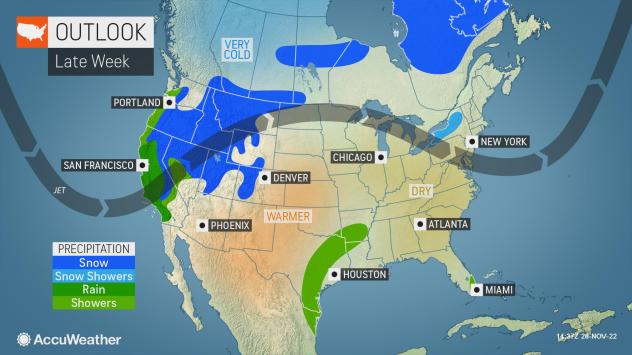 Temperatures will rebound over much of the Midwest from Thursday to Friday and in much of the Northeast from Friday to Saturday; this will likely be welcome news for those planning holiday shopping adventures or other outdoor excursions.

By Friday, highs will be near 50 in Chicago and temperatures will recover to the upper 50s around New York City by Saturday. The forecast temperatures in both cities are 5-10 degrees above average for early December.