Severe weather to threaten 40 million from Texas to Illinois, Indiana and Georgia

As a potent, multifaceted storm rolls out from the Rockies, severe weather ranging from high winds to tornadoes will be possible from the northwestern Gulf coast to the Mississippi Valley, AccuWeather meteorologists warn. Approximately 40 million people in the south-central United States will be at risk for severe thunderstorms into Tuesday night.

"We are fairly confident that there will be multiple tornadoes on the ground from late Tuesday to early Tuesday night," AccuWeather Chief On-Air Meteorologist Bernie Rayno said on Monday. "People should take this threat seriously."

The storm will interact with warmth and moisture from the Gulf of Mexico pushed along by stiff winds. Violent thunderstorms will erupt into Tuesday night as energy from the jet stream moves in miles above the ground. 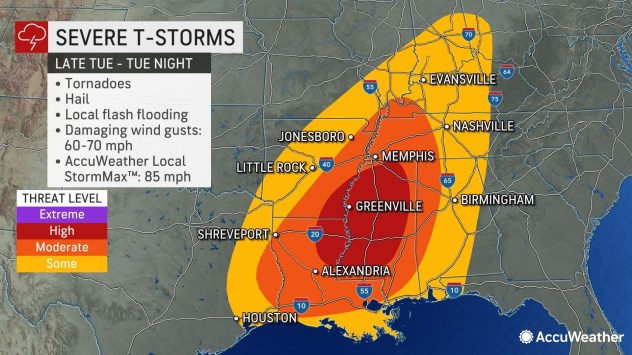 On Tuesday afternoon, the National Weather Service issued its first tornado watch for portions of Louisiana, Mississippi and Arkansas, and referred to the outlined area as a "particularly dangerous situation."

The first storms are likely to fire from portions of the lower Mississippi Valley starting during mid-afternoon on Tuesday. As a push of colder air continues to move along into Tuesday evening and the overnight hours, the storms will shift eastward to the Tennessee Valley and expand northward into part of the Ohio Valley.

The most widespread threat from the storms through Tuesday night will likely be due to damaging wind gusts, which will be capable of downing trees and power lines as well as causing damage to structures. Gusts from the storms will frequently reach 60-70 mph with an AccuWeather Local StormMax™ wind gust to 85 mph possible.

However, given the extreme amount of wind shear expected in the atmosphere, a number of thunderstorms may become intense enough to produce tornadoes.

Wind shear is the change in winds from the ground to several thousand feet up in the atmosphere and can cause thunderstorms to rotate. When a thunderstorm rotates, the risk of a tornado increases substantially. 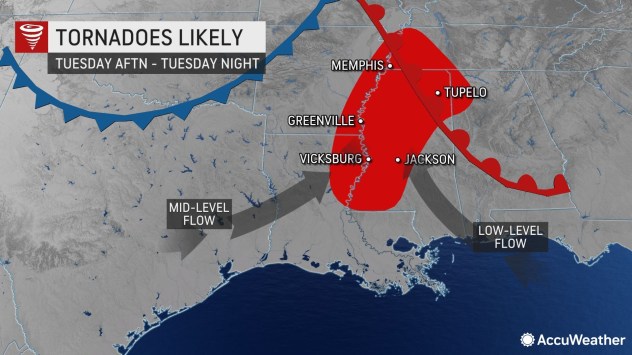 "Across portions of Louisiana, Arkansas and Mississippi, conditions should allow for storms to easily begin rotating, leading to a heightened tornado threat. With such an environment in place, a couple of strong, long-lasting tornadoes also cannot be ruled out," AccuWeather Meteorologist Andrew Johnson-Levine said.

Since the tornado risk will extend into the nighttime hours on Tuesday, it will pose an added danger of not being able to see the storm in advance. Not all of the storms may produce frequent lightning that would illuminate the storm, and there is the added risk that heavy rain may conceal the tornado.

Compared to the tornado outbreak from December 2021 in much of the same area, the setup during the last days of November 2022 is not quite as intense. One big difference is that temperatures will be some 10-20 degrees lower this time and the air will not be quite as humid ahead of the thunderstorms. Temperatures were in the mid-70s to the lower 80s last year and are forecast to peak in the upper 50s to the upper 60s on Tuesday.

The severe weather outbreak on Dec. 10-11, 2021, took the lives of more than four dozen people and resulted in more than 500 injuries, according to the National Weather Service.

Despite the slightly lower threat level compared to December 2021, all it takes is for one or two tornadoes to strike a community and lead to loss of life and tremendous damage.

Downpours from the storms will be heavy enough to not only reduce the visibility for motorists but may also lead to excess water on the roads and urban flooding.

Major metro areas in the path of the storms from late Tuesday to Tuesday night include Shreveport, Louisiana; Little Rock, Arkansas, and Memphis, Tennessee, and perhaps Houston and Nashville as well. There is a chance that severe weather extends into the Atlanta metro area late Tuesday night or early Wednesday morning.

The risk of severe thunderstorms will continue to some extent during the day Wednesday farther to the east. 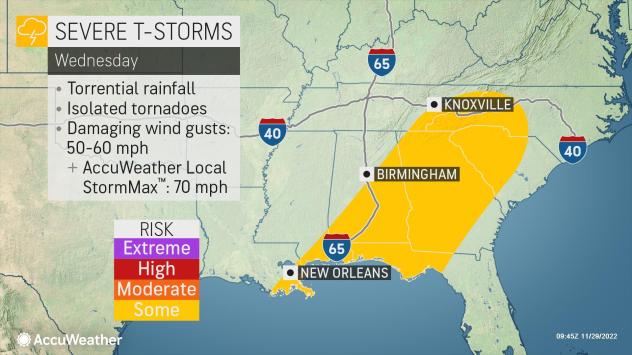 "On Wednesday, conditions in the atmosphere will begin to trend less favorable for severe weather, but that may not be enough to prevent isolated damaging storms from occurring," AccuWeather Storm Warning Meteorologist Joe Bauer stated. "The greatest risk of severe thunderstorms may be near the Interstate-10 corridor of the central Gulf coast, but some strong storms may extend as far north as eastern Tennessee and western North Carolina as well."

Fast movement of the storm system and a trailing cold front will keep the severe weather threat limited to a period of six to eight hours in most cases. That fast motion may allow strong to locally severe storms to push eastward later Wednesday to Wednesday evening in the central portions of Georgia and the Carolinas.

Cities that could experience a period of thunderstorms capable of producing flash flooding and damaging wind gusts on Wednesday include Charlotte, Macon, Georgia, and Greenville, South Carolina.

As the storms swing through the major hubs from Tuesday afternoon to Wednesday evening, airline delays and ground stops are likely.

A vast zone where strong wind gusts, in absence of thunder and lightning, can be locally damaging and disruptive north of the primary severe weather threat. These gusts can occur ahead of the strong cold front due to southerly winds and after the front passes as colder and drier air sweeps in from the west. 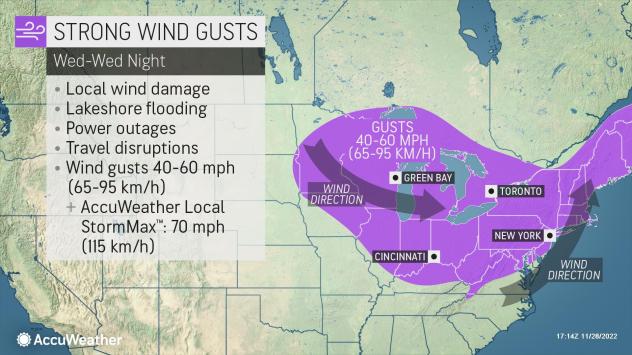 Airline passengers should expect additional delays north of the severe thunderstorm zone in the Midwest and the Northeast from Tuesday to Wednesday.