After 38 years of silence, the world’s largest active volcano, Mauna Loa, began erupting late Sunday night. Residents are being told to review preparedness plans as the USGS keeps a close eye on the volcano.

The eruption in Hawaii Volcanoes National Park is “confined to the summit” and is not threatening downhill communities, according to the USGS. As the early eruption stages of this volcano can be very dynamic and the location and advance of lava flows can change rapidly, the Hawaiian Volcano Observatory (HVO) is closely monitoring it, USGS warned.

“We assume that any eruption on Mauna Loa could be a threat to communities, but it really depends on which way the lava goes,” USGS Ph.D. scientist Jessica Bell told AccuWeather in an interview. “If it goes to the northwest or the west, it could come down into the Waikoloa area and the coast there. If it were to start erupting and flowing more towards the east, then we would be worried about it approaching Hilo, which it did in the 1984 lava flow.”

The USGS uses models to look at a number of different scenarios to better understand the risk the lava poses to populated areas on the Big Island. Bell explained that while the potential flow rate and direction of the lava are still uncertain, all populated areas “are sort of on alert right now.”

Although no evacuations have been ordered, residents were voluntarily evacuating from the South Kona coast, and Hawaii County officials opened at least two shelters, Hawaii News Now reported. Residents who are at risk for Mauna Loa lava flows are being told to review preparedness plans and check with Hawaii County Civil Defense for additional information.

“Lava flows are not threatening any downslope communities and all indications are that the eruption will remain in the Northeast Rift Zone,” the USGS wrote in an update at 6:30 a.m. HST. 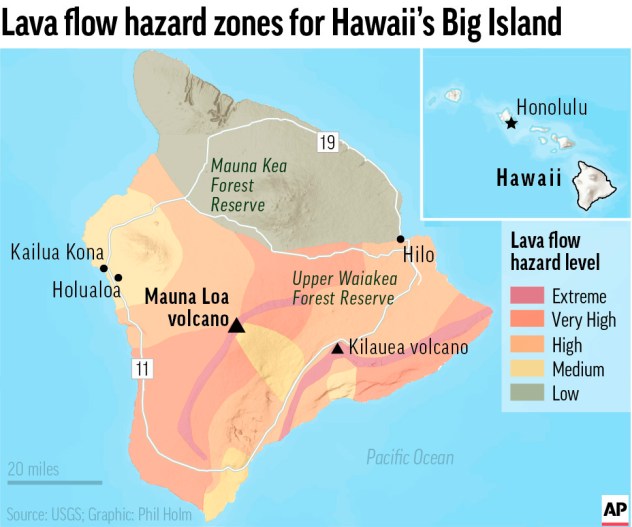 The ground is shaking and swelling at Mauna Loa, the largest active volcano in the world, indicating that it could erupt. Scientists say they don't expect that to happen right away but officials on the Big Island of Hawaii are telling residents to be prepared in case it does erupt soon. This map shows the lava flow hazard level zones for the island.

Southwest Airlines suspended operations at Hilo International Airport on Monday due to the ashfall advisory, Sam Spangler, a reporter for KHON2 in Honolulu, tweeted.

“People with respiratory illnesses should remain indoors to avoid inhaling the ash particles, and anyone outside should cover their mouth and nose with a mask or cloth,” the National Weather Service in Honolulu warned.

Ashfall can damage buildings and vehicles, contaminate water supplies, disrupt electrical systems and sewage and damage or kill vegetation, the NWS said in its warning.

According to Bell, another major concern from this eruption aside from the ash is the gas that is being released.

“Volcanoes mostly put out water vapor, but they also release carbon dioxide, sulfur dioxide, hydrogen sulfide and some other gases and smaller amounts, and those sulfur gases are the ones that will really start irritating your mucus membrane, [like] your lungs, your nose, your throat,” Bell said. “The easiest way to avoid those is to stay indoors. Close your doors and windows. You can also wear well-fitting N-95 masks to help alleviate it a little bit.”

On Monday morning, the volcano alert level was upgraded from an advisory to a warning.

There has been a “swarm of earthquakes,” according to USGS Ph.D. scientist Jessica Bell, who pointed out an increase in seismic activity and increased earthquake rates.

This increase in seismic activity resulted in Hawaii Volcanoes National Park to close Mauna Loa summit to all backcountry hikers until further notice.

“We’ve also been watching changes in the shape of the volcano itself. We basically understood that there was an intrusion of magma into the volcano at some point,” Bell said. “It’s a little hard to pinpoint depth sometimes, but we knew that something had moved into a particular part of the volcano, and that is often [a] precursor to a summit eruption.”

Since records began in 1843, Mauna Loa has erupted 33 times, averaging one eruption every five years.

“However, most eruptions occurred prior to 1950, averaging 3.5 years between eruptions,” USGS wrote in a report about the volcano, which takes up more than half of the Big Island in Hawaii and rises 13,679 feet above the Pacific Ocean. "Since 1950, there have only been two eruptions; a summit eruption 25 years later in 1975 and by a rift eruption nine years later in 1984.”

Sunday’s eruption has ended the longest quiet period on record.