Hours of blowing snow and high wind gusts over rugged terrain proved daunting for one nighttime rescue operation after a woman fell 500 feet off a mountain side in Colorado. 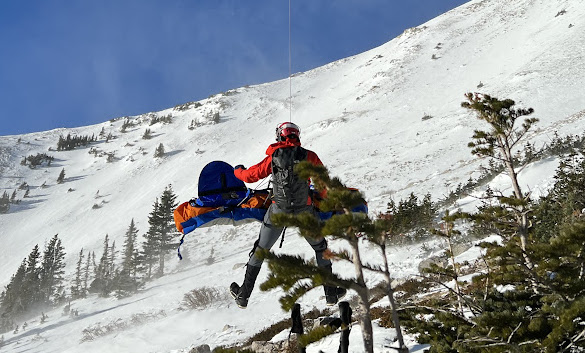 A rescue team member accompanies the injured hiker as both are hoisted into a National Guard helicopter on Saturday, Nov. 19, 2022, on Mount Yale, Colorado. (Photo courtesy of Chaffee County Search and Rescue North)

Biting wind gusts and slick ice fields in the dark of night posed daunting risks for rescuers trying to reach a woman who was stranded for hours in 5-degree-Fahrenheit weather after she fell 500 feet off a hiking trail on Colorado’s Mount Yale recently. The hiker suffered broken bones, a head injury and frostbite, emergency officials said.

The woman was hiking with another person on Friday, Nov. 18, and both were trying to descend the mountain, located about 140 miles southwest of Denver, via the East Ridge when she tumbled “and came to a stop in the rocks" and lay motionless, according to a Facebook post by Chaffee County Search and Rescue North this week. The other hiker was able to send out an SOS alert around 4 p.m. using a Garmin InReach device.

The severe weather conditions prevented the search party from using a helicopter, so the 18-member rescue team headed out on foot instead, officials said.

Temperatures hovered around 5 F with wind gusts topping 30 mph, making it feel many degrees colder throughout the night. By 11 p.m., a team using ice axes and crampons eventually reached the injured hiker and her companion near a ridge at 12,400 feet (Mount Yale has an elevation of 14,200 feet).

Beginning around 1 a.m. Saturday, helicopters made several more attempts to land and retrieve the hikers but “were unsuccessful” due to the weather conditions. “Between the terrain, winds, blowing snow, and nighttime, attempts to land were aborted,” officials said in their post.

Realizing that “an air evacuation would not be possible until dawn,” a medical helicopter managed to drop off more survival gear on the mountain. The rescue team on the ground then moved the victim to the tree line and built a fire to stay warm overnight, the post said.

At daybreak, the Colorado Army National Guard HAATS (high-altitude aviation training) units and technicians from Mountain Rescue Aspen hoisted the woman off the mountain and transported her to the Buena Vista Airport, where she was then transferred to a medical helicopter. She reached the hospital around 8:30 a.m., officials said. 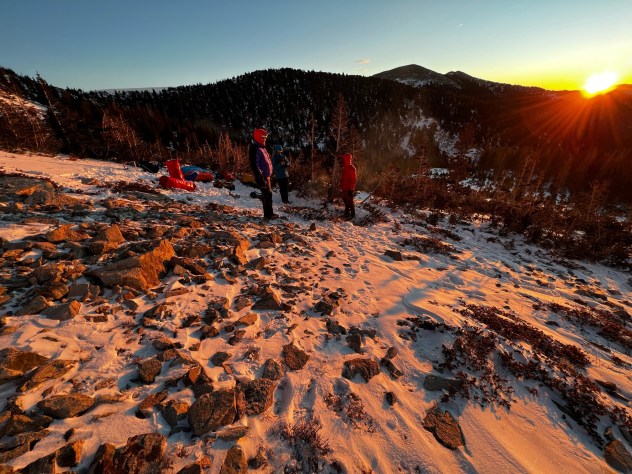 Sunrise on Saturday, Nov. 19, 2022, on Mount Yale in Colorado before the stranded hikers and rescue team were retrieved from the mountain. (Chaffee County Search and Rescue North)

The rescue team emphasized the need for hikers to be extremely prepared on Colorado’s mountains during the late fall and winter months.

“As soon as the sun goes down, early temps drop considerably. If you are attempting a winter summit, please be sure to have the 10 essentials (GPS device, personal locator beacon (PLB), head lamp, first aid supplies, knife, fire, emergency shelter, sun protection and extra food and water), have the gear to spend the night, check the weather conditions, avalanche danger, stick to the trail and know when to turn around to summit another day.”