Old Man Winter has set up shop in the Northeast, and it doesn’t appear to be going out of business anytime soon, as multiple chances of snow are in the forecast in the coming days.

Bone-chilling temperatures across the north-central and northeastern U.S. will set the stage for multiple clipper-type storms to deliver snow early this week as the threat of a larger storm brews.

As waves of cold air continue to bring bone-chilling conditions into the north-central and northeastern United States, one or more storms from Canada will bring the chance for snow to over 50 million people over the coming days and even another major winter storm that could impact the East Coast by this weekend.

The combination of a southward dip in the jet stream, that is unleashing cold air from central Canada to the north-central and northeastern U.S., and a series of disturbances from the northern Pacific Ocean will allow one or more fast-moving storms with snow to target portions of the lower 48 into Tuesday night. 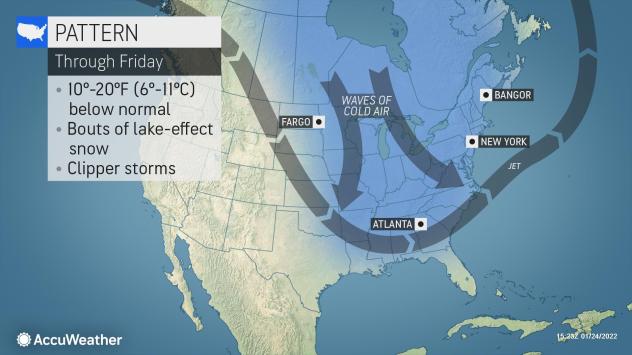 These storms tend to organize over the western provinces of Canada and are dubbed Alberta clippers due to their fast movement and origin. Since there are multiple waves of cold air that are expected to dip down from Canada, clipper-type storms tend to ride along on the jet stream, where the boundary between Arctic air and relatively mild air resides. These types of storms can blanket regions in a quick 1-2 inches of snow, but more persistent snow bands can produce 3-6 inches that can snarl travel.

The first Alberta clipper dove southeastward over the Upper Midwest and produced a swath of accumulating snow from central Minnesota to lower Michigan Saturday afternoon to Sunday morning. Chicago picked up nearly 4 inches of fresh snowfall Saturday to Sunday morning while residents farther west in Madison, Wisconsin, saw almost 5 inches and a snow report was recorded on the Wisconsin and Iowa border of just over 6 inches. As the storm moved through the Chicago area during Monday morning rush hour, roads became snow-covered and slippery. 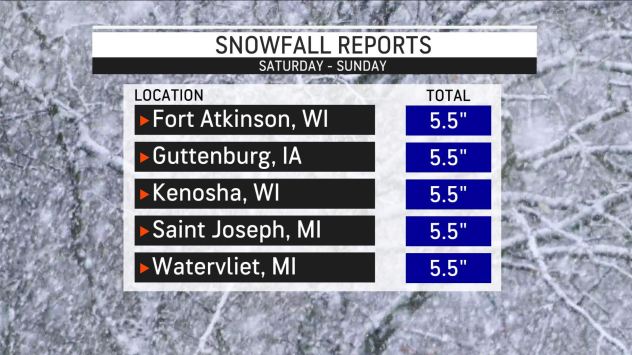 On Sunday, the Pennsylvania Department of Transportation issued a speed restriction along western portions to the Ohio border along Interstate 80. The speed limit was reduced to 45 mph with tractor-trailers and other commercial vehicles are advised to stay in the right lane only as visibility was reduced in a heavy snow shower.

Snow continued to spread farther east through Sunday evening into interior portions of the Northeast and mid-Atlantic where close to 8 inches of snow fell just south of Cleveland in North Royalton, Ohio, and 7 inches in Hinckley, Ohio. Areas north of Pittsburgh had close to 6 inches as well, particularly West Sunbury, Pennsylvania, as the clipper exited the region quickly Sunday night. A few flakes even flew along the I-95 corridor Sunday night in cities like New York City, Philadelphia and Boston, though little to no accumulation occurred from this clipper. 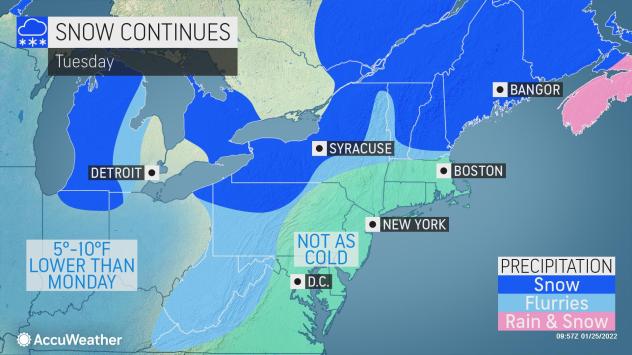 "The second of two clipper-type storms will likely yield a slow evening commute Monday for cities along the Interstate 80 corridor from eastern Illinois into western Pennsylvania, and it only takes a coating of snow to produce locally slick conditions", said AccuWeather meteorologist Brandon Buckingham.

On Monday evening, areas around Akron, Ohio measures as much as 4 inches of snow. About 2.5 inches of snow was reported in Dormont, Pennsylvania on Monday night - just southwest of Pittsburgh. 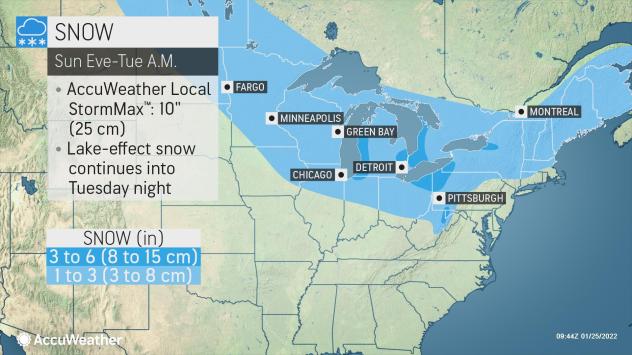 "The clipper will continue to slide off the New England coast on Tuesday where a light snow is expected across much of New England, however, most locations are expected to pick up an inch or less," Buckingham explained.

As the quick-moving clipper exits off the New England coast by Tuesday night, another wave of bitterly cold air will be ushered in across the Midwest, Great Lakes and Northeast that will last through late week. Widespread temperatures well below zero can be expected Wednesday and Thursday morning as Old Man Winter continues to tighten his grip on the north-central and eastern portions of the U.S. 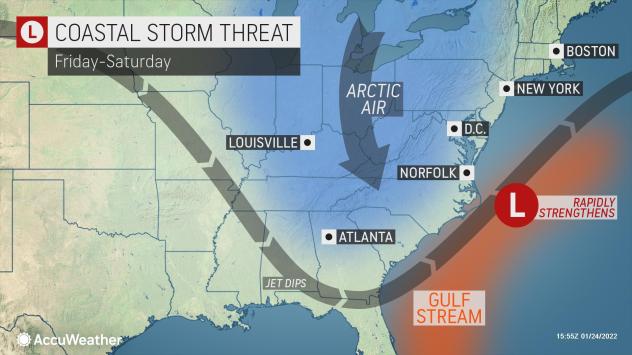 AccuWeather meteorologists are watching for the next winter storm that could pack a wintry punch from the Southeast to the Northeast late this week into the weekend. A storm currently near the Aleutians in Alaska is expected to hitch a ride on the jet stream and travel southeast, diving through the Canadian Prairies and northern Plains by midweek.

This storm could reach the southeastern U.S. late in the week and move off the Southeast Coast where it is expected to rapidly strengthen over the warmer Gulf Stream waters as a wave of Arctic air dives southward in the wake of the storm.

The big question at this early stage is where does the storm track in relation to the East Coast.

AccuWeather Senior Meteorologist Brett Anderson explained two scenarios: if the jet stream becomes highly amplified over the Southeast late this week, that would force the storm to track close to the coast which could potentially bring significant snow and wind from the southern Appalachians through the Middle Atlantic and Northeast regions late Friday through Saturday.

On the other hand, if the jet stream ends up being less amplified, then the storm will be slower to strengthen would likely remain far enough out at sea to prevent major impacts along the Eastern Seaboard, Anderson explained.

AccuWeather meteorologists will continue to closely monitor this potential storm, where it will track and its intensity through the week.