The mid-Atlantic is preparing for an approaching blast of winter weather as some communities are still recovering from an early-week snowstorm. AccuWeather forecasters say that accumulating snow will be disruptive in areas like Virginia, which were slammed by the recent snowstorm. The system will also strengthen off the Northeast coast and impact areas farther north that were missed by the last winter storm — with some areas predicted to pick up a foot of snow and face other hazards.

Virginia Gov. Ralph Northam declared a state of emergency on Wednesday in anticipation of the wintry weather as more than 100,000 customers remained without power into Thursday afternoon in Virginia, three days after a potent storm dropped more than a foot of snow in spots and led to nightmarish travel conditions.

Winter storm watches, warnings, and advisories were in effect across a large corridor of the United States from Colorado to Maine on Thursday as the snowstorm spread into the Tennessee Valley. By early evening on Thursday, New Jersey Gov. Phil Murphy had declared a state of emergency for the Garden State, the second time within a week he had done so.

Arctic air surged across the Midwest on Wednesday night and will drill into the Northeast into Thursday evening. A storm developed along the leading edge of the cold air as a dip in the jet stream provided enough fuel for a new system to form. It will be a fairly fast-moving storm that will sweep eastward into the Northeast Thursday night into Friday.

"This will be a disruptive storm, and since cold air will be preceding the storm, snow will accumulate on roads as soon as it starts,” AccuWeather Chief On-Air Meteorologist Bernie Rayno said.

Air temperatures at the onset of the storm will generally range from the 20s F over the mountains to the lower 30s F along much of the I-95 corridor — and temperatures may dip further at the height of the storm. 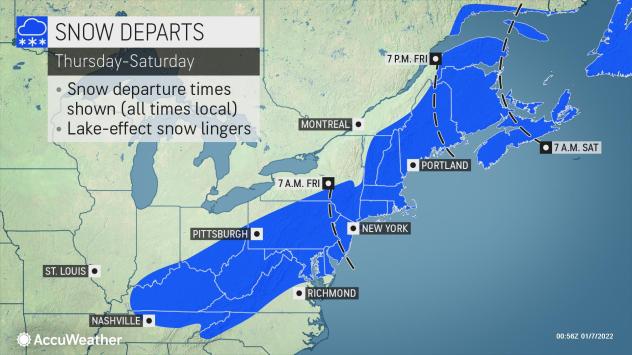 Even though the storm will be moving along quickly, it will strengthen off the mid-Atlantic and New England coasts, according to AccuWeather Senior Meteorologist Joe Lundberg. It is likely to become "the first bomb cyclone of the 2022 winter season” in the Northeast, he added. A bomb cyclone is defined as a storm that’s central pressure plummets by 0.71 of an inch of mercury (24 millibars) within 24 hours. That means the storm could whip up strong winds and pull in more moisture, helping it to fuel heavier snow rates as it chugs up the Eastern Seaboard.

The heaviest snow is expected to spread across eastern Kentucky and West Virginia into parts of Maryland, northern Virginia, western North Carolina and far northeastern parts of Tennessee by Thursday night. The most significant accumulations are expected to remain north and west of Washington, D.C., with 1 to 3 inches predicted in the nation’s capital. 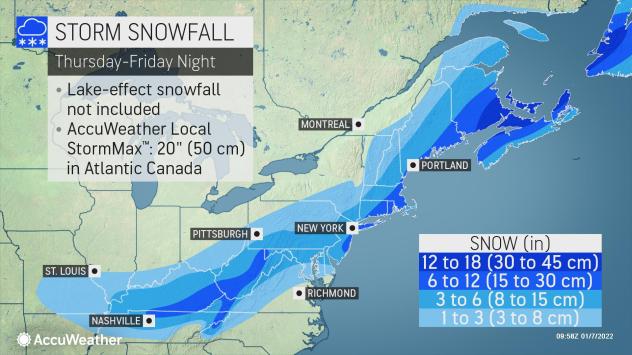 As the storm shifts across Virginia then up the Eastern Seaboard, Philadelphia and New York City are expected to pick up 3 to perhaps 6 inches of snow into Friday.

Snowfall rates of 1-3 inches per hour could occur across northeastern portions of Maryland, including around Baltimore, southeastern Pennsylvania, New Jersey and up toward New York City late Thursday night to around daybreak on Friday and through the morning hours on Friday in southeastern New England, with the potential to create treacherous travel conditions.

The storm’s rapid intensification will lead to heavier snow as the system makes the trek northward along the East Coast. Boston; Providence, Rhode Island; Hartford, Connecticut, and Portland, Maine, are in line to pick up 6-12 inches as the storm strengthens.

Travel will be slippery and difficult along the I-95 corridor from Washington, D.C., through New York City and Boston with this storm during Thursday night. By the Friday morning rush hour, most of the snow will have already fallen from Washington, D.C., to Philadelphia, but roads will likely remain slippery through the midday hours. Around New York City, snow may continue to fall through the morning commute on Friday, and can cause slippery travel conditions. In Boston, much of Friday will be snowy and travel is likely to be slippery all day. 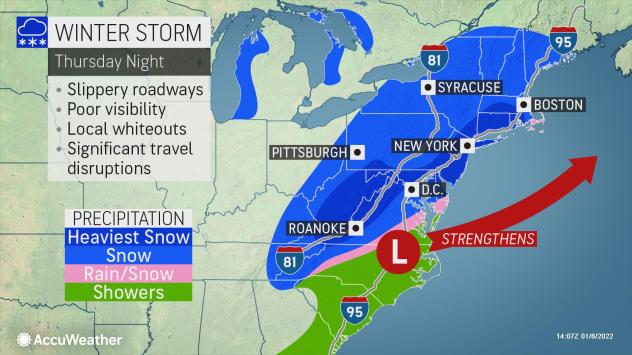 Since the storm will depart early in the day over a sizable portion of the mid-Atlantic, some natural melting, combined with chemical treatment of the roads may allow for some improvement of travel conditions during Friday afternoon, but plunging temperatures will cause wet and slushy areas to freeze during the evening.

Gusty winds, combined with low temperatures and dry, powdery snow from New York City to Boston will lead to some blowing and drifting of the snow in suburban and countryside locations during the latter part of the storm and into Friday night.

A blizzard is likely to unfold from southeastern Maine across the border into New Brunswick, Canada, where winds will frequently reach 40 mph or higher, and snow and blowing snow will reduce the visibility to under 1/4 of a mile at times. These intense conditions could occur in parts of eastern Massachusetts as well on Friday afternoon, depending on how quickly the storm undergoes bombogenesis. 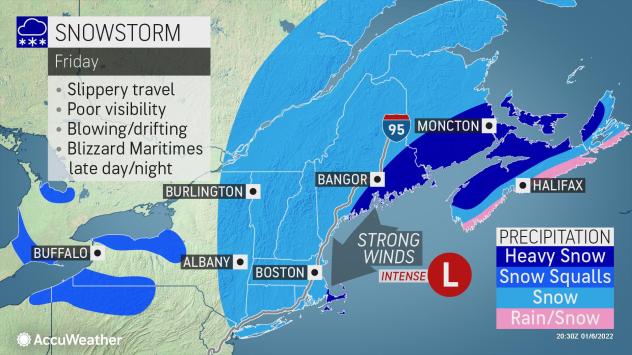 The track of the storm may prevent a general snowfall from reaching the eastern Great Lakes region, but the region will be hit with rounds of lake-effect snow into Friday. Some communities around Buffalo and Watertown, New York, may end up with 2-3 feet of snow by Saturday morning, where persistent bands of lake-effect set up. Within the most intense bands, blizzard conditions can occur.

"Even outside of the most persistent lake-effect snow bands, shifting areas of lake-effect snow and flurries unrelated to the coastal storm can deposit 1-3 inches of snow into the end of the week around the Great Lakes region in general," AccuWeather Meteorologist Jake Sojda said.

Icy weather to precede Arctic blast from Midwest to Northeast