Lake-effect snow warnings have been issued for parts of western New York ahead of a long-duration lake-effect snow event that could produce potentially record-setting amounts of 3 to 6 feet.

Bands of heavy lake-effect snow began to pour off Lake Erie and Lake Ontario late Wednesday night, and AccuWeather meteorologists say that this round of snow is only one phase of what is shaping up to be a historic and multiday snowfall event.

AccuWeather forecasters say that the blockbuster lake-effect snowstorm will bury some locations with feet of snow, grind travel to a halt and potentially stamp new marks in the weather history books.

Forecasters warn that travel could be difficult to nearly impossible amid the heaviest snow bands, including along sections of Interstate 90 in the Buffalo, New York, area and I-81 north of Syracuse. Snow may pour down at the rate of 2-4 inches per hour at times with thundersnow possible in the most intense bands.

On Wednesday, a state of emergency was issued by New York Gov. Kathy Hochul due to the forecast. The state plans on bringing “emergency assets” to crisis areas. 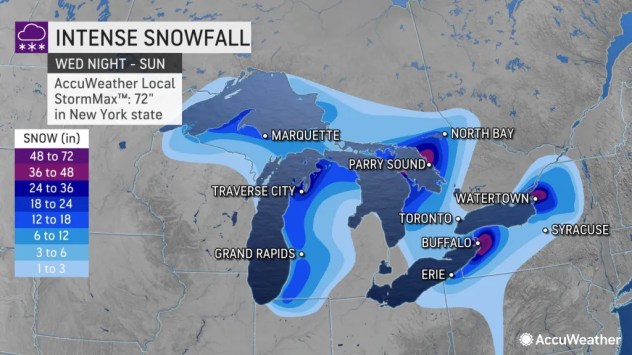 While the region has had its fair share of snow showers due to the recent arrival of winterlike cold, experts say that the upcoming event could be one of historic proportions as the lake-effect machine ramps up to full throttle beginning Thursday and continuing right into the weekend.

The National Weather Service issued a lake-effect snow warning for the Buffalo area on Wednesday. The warning was scheduled to remain in place into the weekend. The warning also encompasses nearby Orchard Park, New York, where the NFL's Buffalo Bills are scheduled to play the Cleveland Browns at 1 p.m. on Sunday.

"These early-season events can be potent, as lake water temperatures are still quite mild compared to the middle to the latter part of winter," AccuWeather Meteorologist Matt Benz said. As of Thursday morning, waters on the Great Lakes were generally around the 50s F -- several degrees above normal for this time of year.

"The heaviest snowfall is expected to occur downwind of Lake Erie and Lake Ontario in New York and Lake Huron in Ontario. Several feet of snow can occur where snow bands persist over the same location for an extended period of time," Benz said.

AccuWeather's winter weather experts say that one such intense band is expected to set up around the Buffalo area. A winter storm watch has been hoisted for the metro area and across southwestern New York as a result of this threat.

"Buffalo and its southern suburbs may receive as much as 3 to 6 feet of snow by Sunday," Benz said, adding that the heaviest snow may fall over two periods -- Thursday night into Friday and then Saturday into Saturday night. "These two periods will likely feature the worst conditions of this event." 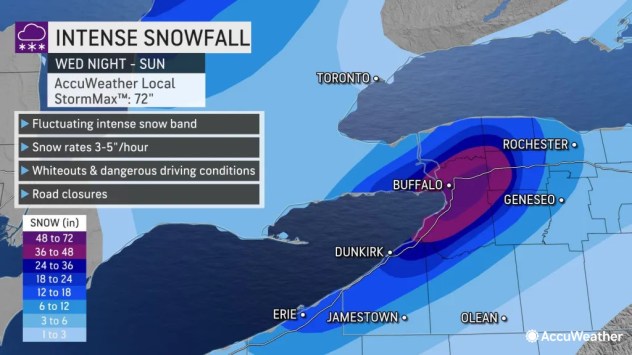 Travel is strongly discouraged during the height of the event as motorists will run the risk of becoming stranded on the roadways as the snow falls fast and furiously, making it difficult for road crews to keep up with clearing the snow. Experts advise anyone who must venture out to be prepared by having an emergency kit in their vehicle.

By early Thursday morning, parts of Erie County in Pennsylvania had already reported up to 10 inches of snow.

Forecasters say that prior blockbuster lake-effect snow events in Buffalo during the month of November bear some resemblance to the upcoming pattern. During Nov. 20-23, 2000, the metro area was shut down as over 2 feet of snow buried the region. This event gave the city its largest single-day snowfall for November -- 24.9 inches on Nov. 20, according to National Weather Service climate records -- a record that could certainly be challenged with the upcoming lake-effect event.

In 2014, another significant lake-effect snow event occurred in the area from Nov. 17-19. Just east of Buffalo, more than 5 feet of snow fell while barely a few inches were recorded just a few miles to the north. More than a dozen deaths were blamed on the 2014 event as the heavy snow stranded thousands of motorists and caused a number of roof collapses and structural failures. 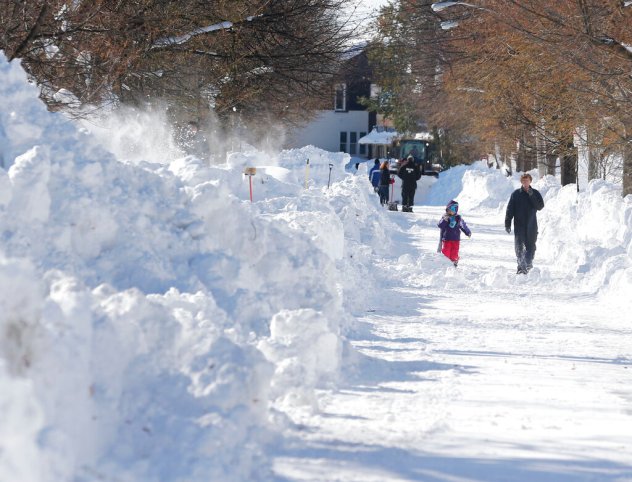 People walk along a snow-covered street in the south Buffalo area on Friday, Nov. 21, 2014, in Buffalo, N.Y.

"All the top 10 snowfall events for Buffalo have occurred in November and December," Benz noted. "This is due to the fact that Lake Erie is still quite warm with no ice cover this time of the year. The lake can contribute more moisture when cold air moves overhead, helping to produce more intense bands of lake-effect snow."

AccuWeather meteorologists say that roofs on homes and buildings may again be compromised in the areas that receive the most intense snowfall late this week as a result of the added weight. Power lines may also come tumbling down and cause some communities to lose power.

Daytime temperatures will be in the upper 20s to lower 30s F throughout the lake-effect event, but strong winds off the Great Lakes will result in AccuWeather RealFeel® Temperatures in the teens and single-digits.

Buffalo will not be the only place where residents will receive a shock from Old Man Winter. 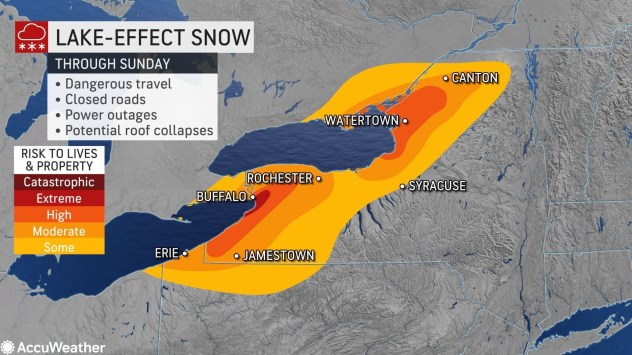 "Other areas that may get a couple of feet of snow include the Tug Hill plateau east of Lake Ontario and places adjacent to Georgian Bay on Lake Huron in Ontario," Benz said.

Watertown, New York, is another locale that could be hit hard with snowfall totals greater than 2 feet possible there. The AccuWeather Local StormMax™ through the entire event is 72 inches (6 feet).

The long-duration lake-effect event may not fully wind down until early next week, although forecasters do anticipate a shift in the wind direction late in the weekend that would finally steer the heaviest snow bands away from Buffalo and Watertown as residents and property owners attempt to dig out.

Editor’s Note: A previous version of this article mentioned travel was already disrupted through Pennsylvania with several lane-blocking accidents, including in Cumberland County and the Philadelphia suburbs. These accidents were not related to the unfolding lake-effect snow event.