Denver could get one of its biggest snowstorms since 1885

Denver will get walloped by the storm, but another city could set a new all-time record, Bernie Rayno predicts.

Winter storm watches and warnings were in effect in parts of Colorado and Wyoming on Thursday as AccuWeather forecasters continued keeping a close eye on weather conditions that are expected to unleash a monster snowstorm across the Denver area in the coming days that could possibly become one of the biggest snowstorms in the Mile High City’s history. The looming storm threatens to be a long-duration event that could result in snowfall totals nearing 2 feet in Denver and piling as high as 3 feet in places west of Denver, such as Boulder and Fort Collins. Heavy snow will stretch north into Wyoming as well.

The wintry blast could feel all the more shocking because it is following closely behind springlike weather in some places like Denver, where temperatures have been averaging nearly 20 degrees above normal, hovering at or just under 70 degrees each day Sunday through Tuesday.

The storm, which AccuWeather meteorologists have been monitoring the development of since last week, was unloading beneficial rain and heavy mountain snow across California and Nevada on Wednesday, but it will strengthen further as it pushes inland from the Pacific coast and travels across the interior West. As it does so, it will also tap into moisture from the Gulf of Mexico, which will enhance precipitation.

“One of the biggest snowstorms we’ve seen all year,” is set to unfold as the storm pushes inland across the southern Rockies, AccuWeather Chief On-Air Meteorologist Bernie Rayno said.

Colorado Gov. Jared Polis announced that he has activated the Colorado National Guard beginning at 12 p.m., local time, on Friday into 12 p.m. Monday. The National Guard will respond to search and rescue requests through the Emergency Operations Center due to the storm.

"I urge you to stay home if it’s going to snow hard in your area so you don’t need them to rescue you," Polis said.

Snowfall will pick up in intensity across the the central and southern Rockies — and across Colorado and southeastern Wyoming in particular — on Saturday night into Sunday. Snowfall rates will reach 1-3 inches per hour, and as the storm continues, strong winds will blow as well. 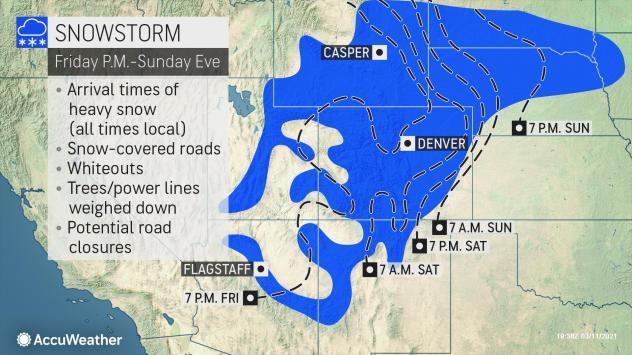 Blizzard criteria — three-straight hours of sustained winds or frequent gusts of 35 mph and visibility of a quarter of a mile or less in snow or blowing snow — will be approached in the region, according to Rayno. Gusts could reach as high as 30 mph as the snowstorm first gets underway on Saturday then increase to as high as 40 mph Saturday night and up to 50 mph on Sunday.

Travel impacts from the weather are all but certain. Roadways such as "I-25 and I-80 may get shut down late Saturday into Sunday,” Rayno said.

More than a foot of snow will fall across a compact area, including across northeastern Colorado, southeastern Wyoming and southwestern Nebraska. Denver is expected to pick up 1 to 2 feet of snow from the storm. 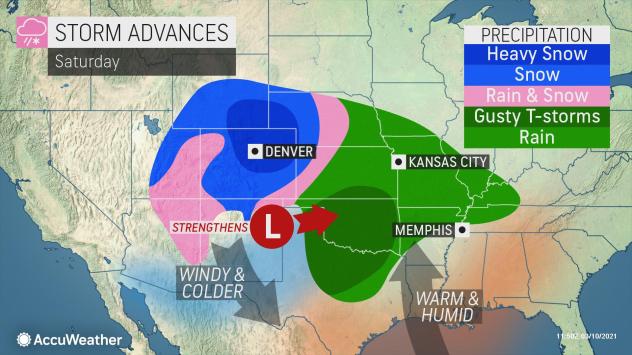 “We will have a chance of eclipsing the seasonal total in one storm,” Rayno said. Denver has received 34.1 inches for the season to date. "The storm has the potential to rank among the biggest on record in Denver." 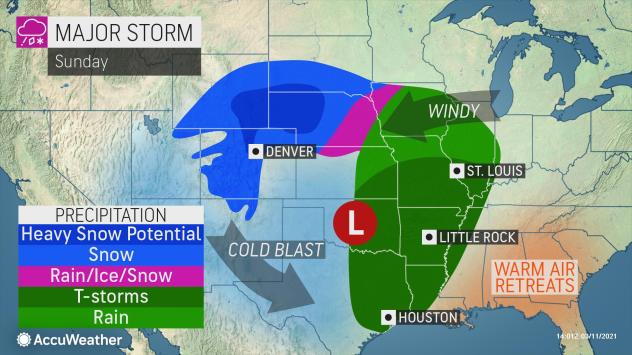 "The rate of wet and clinging snow can be excessive, create whiteouts and lead to trees and power lines coming down," AccuWeather Senior Meteorologist Brett Anderson said. Blowing and drifting snow is anticipated in the vast open areas and over the ridges and through the passes.

Several feet of snow can pile up over the foothills west of Denver and in southeastern Wyoming where an AccuWeather Local StormMax™ of 60 inches is projected.

A March snowstorm isn't unusual for Denver. In fact, the city typically has bookend winters with snowfall occurring during the autumn and then again late in the winter due to typical weather patterns. The average snowfall for February in Denver is 5.8 inches as opposed to nearly double the amount, or 10.7 inches, for March. 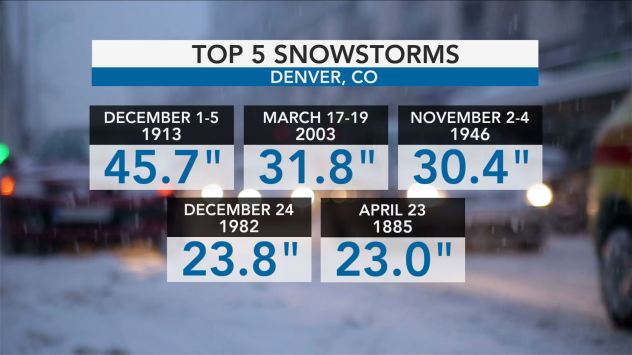 Forecasters warn that unnecessary travel should be avoided from Saturday afternoon through Sunday. This will ensure people's safety and allow road crews to work without highways being clogged with stalled vehicles.

Due to the risk of power outages from the storm, people should locate flashlights and batteries and make sure generators are in working order and fueled in advance of the storm. It is also a good time to review operating procedures for generators like avoiding indoor use, including in a garage or basement.

Snow from the weekend storm will follow a quick-hitting storm at midweek that unloaded a few inches to a foot or more of snow in parts of Wyoming, the Nebraska Panhandle and southwestern South Dakota. 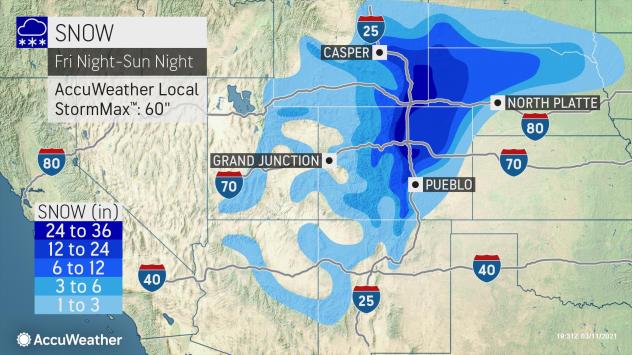 The combination of snow from both storms could leave Cheyenne, Wyoming, buried waist deep in snow. The pair of storms may end up bringing more than half an entire season's worth of snow to the city, where an average of 60 inches of snow falls per year.

The biggest single-snowstorm total in recorded history in Cheyenne stands at 25.6 inches. That record was set on Nov. 19-21, 1979.

“I think we’re going to beat that. I think this will be the largest snowstorm that Cheyenne, Wyoming, has seen,” Rayno said, adding a prediction that the snowfall will at least be a contender for the city’s top-five snowstorm ranking. In order to crack that list, more than the 18.3 inches would need to fall to beat a May 5-6, 1978, snowstorm that dropped that amount and currently ranks as the fifth-biggest snowstorm on record.

The projected path of the storm from the Four Corners region of Colorado, Utah, Arizona and New Mexico to the High Plains should allow heavy snow to fall just north of the track.

"Typically, storms that clobber Denver with heavy snow tend to bring much less snow to Colorado Springs, Colorado, and little to no snow to Pueblo, Colorado," Anderson said.

Any shift in that track may cause the heaviest snow to shift farther to the south or north. As a result, people in southern Colorado and western Kansas, as well as northern Wyoming and western South Dakota, should monitor the storm's progress.

In portions of northwestern Kansas, central and northeastern Nebraska and southern South Dakota, temperatures within a few degrees of the freezing mark may allow rain or wintry mix to occur during the height of the storm. If this mixing is limited or the temperature dips slightly, then very heavy snow can fall in these locations as well. 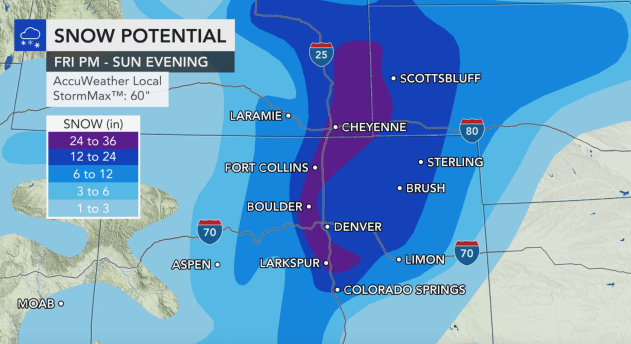 The looming monster storm has been on AccuWeather's watchful eye since early last week and is actually a large southward dip in the jet stream that is expected to become a closed low-pressure area. This closed low is essentially a storm located high in the atmosphere. Because storms of this nature are thoroughly involved at the jet stream level, they often bring extreme weather to the lower part of the atmosphere.

Just like the big storm in 2003, this storm could be very beneficial in boosting snow levels in the mountains and rain in lower elevations as soil conditions range from abnormally dry to that of exceptional drought in Colorado and much of the West, according to the latest report from the United States Drought Monitor.

Other impacts from the storm include gusty winds hundreds of miles away from the snow area that can substantially increase the wildfire danger over portions of the Plains and Southwest into this weekend. Red flag warnings are in effect from New Mexico and West Texas for Friday. There is also the potential for severe thunderstorms across parts of the South Central states, especially from Saturday to Sunday.