Temperatures will increase slightly as the week goes on, but will remain well below normal for several cities.

A historic cross-country winter storm left a mess behind from the south-central United States, where significant snow, ice and Arctic air wreaked havoc in Maine, where the storm was finishing up with snow and ice Tuesday. And there will be no rest for the weary.

The next coast-to-coast storm arrived Monday in the Northwest and was shifting toward some of the hardest-hit areas of the country, including Texas and Oklahoma, only about 24 to 36 hours after the first storm departed.

Rolling blackouts left more than 4 million without power and heat in the Lone Star State as the coldest air in decades gripped the region Tuesday morning. The temperature in Dallas Tuesday morning dropped below zero for the first time since Dec. 23, 1989.

"Our next storm is going to come quickly eastward across the southern Plains states late Tuesday into Wednesday,” AccuWeather Chief On-Air Meteorologist Bernie Rayno said. The storm will bring more snow and ice and “just a real mess” to many areas of the country, including the South, Midwest and Northeast, he explained. 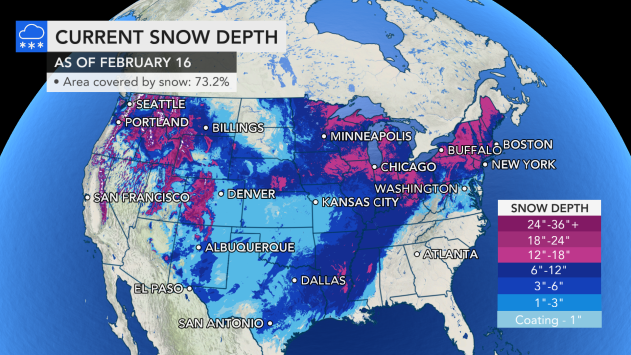 "Already 73.2% of the lower 48 U.S. is covered in snow and we will build on the existing amount of snow on the ground with this next storm," Rayno said.

Since snow cover began being tracked regularly in 2003, this is the highest percentage of the contiguous 48 states to be covered by snow. The old record was 70.9% on Jan. 12, 2011.

Many areas of the South Central states were blanketed by at least a few inches of snow and/or sleet Tuesday morning, while many parts of the Midwest and Northeast had a snow depth of 6, 12 and even 18 inches of snow or greater -- and even more is on the way.

As the storm advances to the northeast through Friday, snow is forecast to fall along a 2,000-mile-long swath from northwestern and north-central Texas to northern Maine. Freezing rain and sleet will occur to the south and east of the snow zone, extending from central Texas to southeastern New York state.

On top of the storm's threat for additional power outages, daily commutes and shipping will be adversely affected. The storm is likely to shut down long stretches of highways and hinder normal flight operations at airport hubs.

Some areas in the South Central states that rarely have snow but every few years have gotten more than their share in the past week. Snow fell as far south as the Lower Rio Grande Valley of Texas, where damage to citrus crops from the long-duration severe cold is being assessed. Snowflakes were observed as far southeast as across New Orleans, Louisiana, Monday, where freezing air was in place for Mardi Gras; however, many of the celebrations have been canceled by the COVID-19 pandemic.

"Heavy amounts of snow and ice that occurred with the midweek storm in the Central states are expected in the same general areas that were pounded by the early-week storm," Rayno said.

Enough ice is forecast to occur to add more thickness of the ice and snow on the ground. The fresh glaze of ice can further weigh down trees and power lines, threatening more damage and outages.

"This time, at least, ice and snow are not forecast to occur quite as far to the south in the Central states," AccuWeather Senior Meteorologist Brett Anderson said.

"Houston and San Antonio will be on the southern edge of the zone where sleet and freezing rain are anticipated with the midweek storm," Anderson added. But northwestern suburbs of Houston could still feel the effects of the ice storm.

Austin, Texas, was hit especially hard with a thick glaze up to 0.75 of an inch thick that bent trees, broke tree limbs and triggered additional power outages.

From part of central Texas to northwestern Louisiana, southeastern Arkansas and part of northern Mississippi, a major ice storm was underway on Wednesday morning. A heavy amount of ice with accumulations ranging from 0.25 to 0.50 of an inch with locally higher amounts is expected along with the potential for widespread tree damage and power outages. 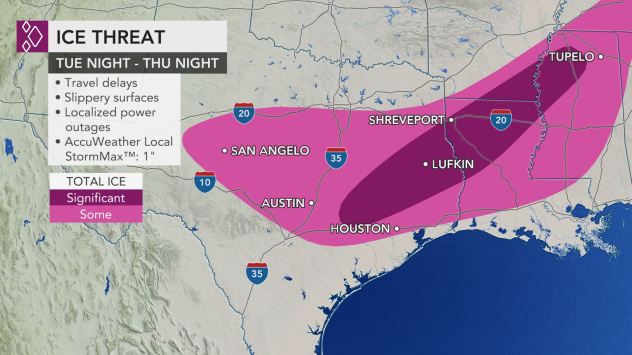 A fresh glaze of ice is forecast for much of Tennessee with enough to make roads and sidewalks that have been cleared slippery and dangerous all over again.

The heaviest snowfall accumulations over the South Central states are predicted to occur across the Red River Valley in northern Texas and southern Oklahoma, eastward into central Arkansas, where snow amounts could reach 6-12 inches with an AccuWeather Local StormMax™ of 24 inches. 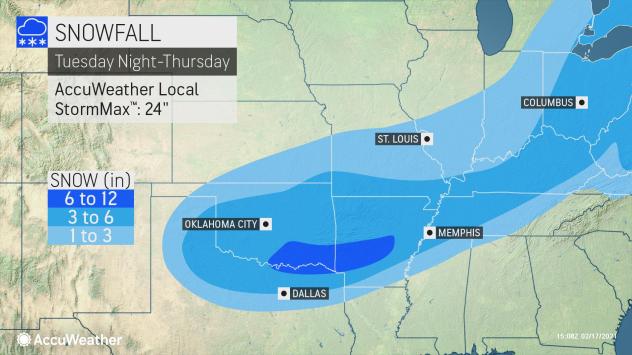 Dallas typically picks up 1.6 inches of snow per year, but the storm that departed on Sunday left behind 4 inches, or more than double the seasonal average. The latest storm deposited a general 1-2 inches of snow into Wednesday midday with heavier snow north of the Metroplex.

With mere hours between storms, many crews and property owners did not have had enough time to remove snow and ice and restore power before the next storm hit.

The same storm was bearing down on the Northeast states Wednesday and will hit some areas, such as New York City with heavy snow, while a thick glaze of ice is forecast for parts of Virginia and North Carolina into the end of the week.

Will the unrelenting storm pattern finally come to an end?

There is a glimmer of hope for those dealing with power outages, major disruptions in daily activities or just plain exhaustion from all the winter storms.

"Behind this winter storm, there is a break in the relentless pattern of cross-country snow and ice on the way soon," AccuWeather Senior Meteorologist Courtney Travis said. 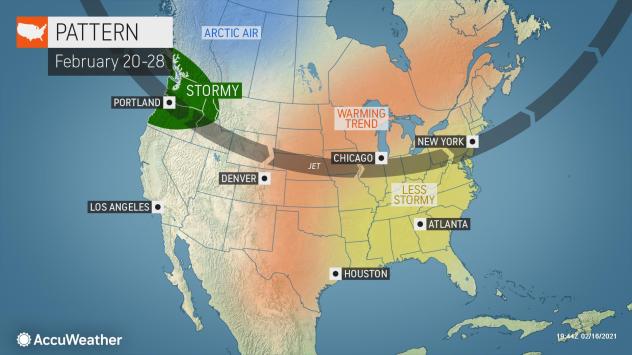 Despite the forecast trend toward milder and less-stormy conditions, the vast extent of snow cover and cold ground can lead to sneaky, slippery conditions with melting and freezing cycles. Motorists and pedestrians should travel with care until the existing snow and ice cover and piles of snow have disappeared. AccuWeather forecasters say that may take some time over the northern half of the nation.