Coldest air of the season to send Midwest, Northeast into deep freeze

Brutally cold air from the Arctic is making its way through the North Central states and into the Northeast, and AccuWeather forecasters say Tuesday will be the coldest day of the winter so far in the region.

Bitter cold and high pressure sent temperatures plunging well below zero across the Upper Midwest and northern Plains Monday morning. Monday morning's temperatures in Minnesota were on par with temperatures measured at the North Pole; International Falls, dropped down to -22 F, while Duluth fell to -18 F.

Across the region, places like Duluth as well as Grand Forks, North Dakota, did not have temperatures rise above 0 F all day on Monday. Meanwhile, temperatures peaked at 16 degrees in Chicago. This time of year, the Windy City usually has afternoon temperatures just around freezing.

Gusty conditions across portions of the Midwest led the outside air to feel even colder than the thermometer reading as AccuWeather RealFeel® Temperatures dipped below zero at times across northeastern Iowa, northern Illinois and central Michigan on northward to the Canadian Border.

Monday afternoon, AccuWeather RealFeel® Temperatures plummeted to a teeth-chattering minus 6 F in Chicago.

The cold air rushing over the warmer lakes will allowed lake-effect snow showers to expand south and east of the Great Lakes early this week. Several locations downwind of the Great Lakes were crushed by snow on Monday. In just one day, Osceola, New York, recorded a staggering 30 inches of snowfall, with totals topping a foot and a half in a handful of other locations. 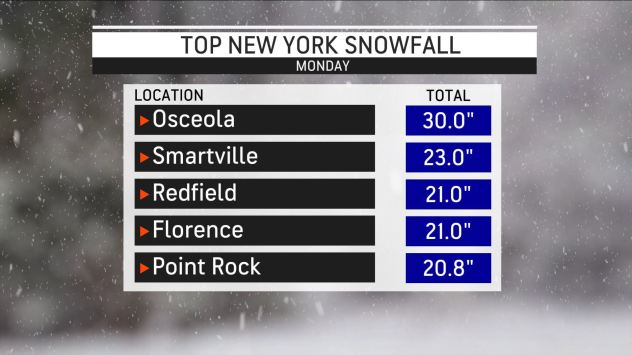 This frigid air could also help increase ice coverage across the Great Lakes. As of Saturday, ice cover in the Great Lakes was below average, and this dip in temperatures could replenish some of the ice that's missing.

"One concern is with how windy it will be over the next few days," said AccuWeather Meteorologist Matt Benz, explaining that this can help hinder ice buildup by mixing the water. 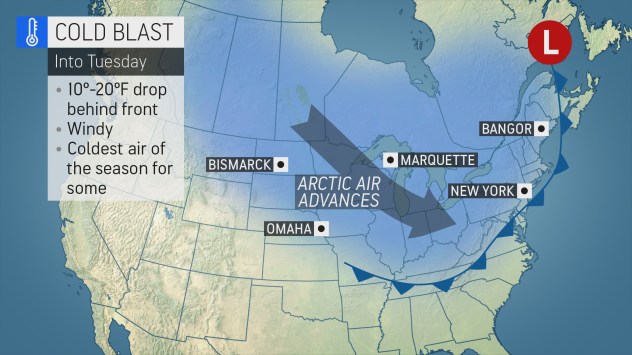 "The coldest air of the season thus far will arrive for a majority of the Northeast and portions of the mid-Atlantic by Tuesday as Arctic air plunges into the northern U.S.," said AccuWeather Meteorologist Mary Gilbert.

After the region was blasted by a quick-moving snowstorm last week and then impacted by an ice storm over the weekend, residents should get ready to bundle up as temperatures plummet and bitterly cold air settles in.

"In New York City, the lowest low temperature recorded so far in 2022 was 19 degrees Fahrenheit back on Jan 4," said Gilbert, adding that on Tuesday, the high temperature will struggle to even reach 19.

High temperatures on Tuesday in Boston are anticipated to barely rise into the lower teens, which is more than 20 degrees below the average in the upper 30s. Schools in Boston will be closed on Tuesday due to the extreme cold, city officials said Monday.

"For the Boston area, I think it’s safe to say that Tuesday will be the coldest day in three years -- since January 2019," Dan DePodwin, Director of Forecast Operations at AccuWeather, said.

In Albany, New York, temperatures aren't forecast to rise above 10 F. Typically, the city has temperatures in the lower 30s in January. Temperatures will be largely 20-30 degrees above average across the Northeast.

In some locations, like Caribou, Maine, temperatures are forecast to never rise above the 0 F degree mark at all on Tuesday. The last time the temperature in Caribou failed to climb above 0 F in a single day was on March 11, 2017. 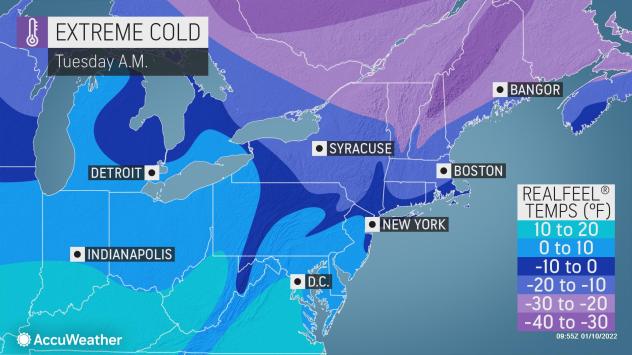 "With AccuWeather RealFeel® Temperatures expected to be at least 5-10 degrees lower than the actual air temperature across the region on Tuesday, anyone headed outdoors will certainly want to layer up," warned Gilbert.

Those on the road should prep their vehicles with an emergency cold weather kit in case of breakdowns on the road. Homeowners are recommended to take extra care to avoid pipes bursting as temperatures drop and heating demands rise. 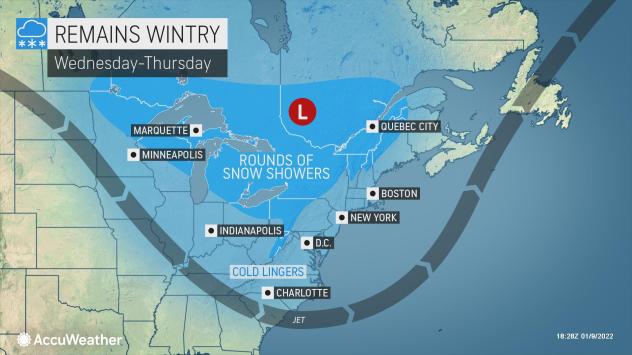 "By Wednesday, the coldest air is expected to make its journey out of much of the Northeast," said Gilbert.

The Big Apple will have high temperatures around the average of around 40 F this time of year, while Boston is expected to rebound into the middle 30s.

AccuWeather forecasters are also keeping an eye on a clipper system that could dive out of Canada and bring some light snow to the Great Lakes and Northeast during the second half of the week. Accumulations are anticipated to be light overall.

A reinforcing push of cold air may precede and accompany that clipper storm.